Once upon a time, there was a magician named Jim Henson. This man could create magical creations with his mind. He inspired others to bring them to life on the big and small screen. Jim Henson could come up with the most astonishing stories about these creatures that would leave you enchanted and wanting to see the story again and again.

Basically, there was no end to this man’s imagination. He made the world fall in love with a frog and made a pig into a super model. He even transformed a rock star into a king of the goblins dressed in velvet and lace.

Long, long ago in another time (around 1987), this talented magician decided to make a show about a storyteller, who like him was a weaver of dreams and a teller of tales, and it was named Jim Henson’s Storyteller. This became an amazing television show with captivating acting, beautiful visuals, and enchanting stories. His stories would capture the hearts and minds of anyone who loved fairy tales, fantasy .and romance. Do you wish to hear more? Gather around lovelies and listen well…

When people told themselves their past with stories…

Tales As Old As Time

When Jim Henson’s daughter took a folklore class in Harvard years ago, she and her father probably little knew that it would grow into an idea for one of his most fascinating works. The creator of the Muppets, Jim Henson’s Labyrinth, The Dark Crystal and more became fascinated by the concept and built on it with his usual ambitious zeal. The result was nine episodes of a show about a little man who sat alone before the fire and told stories to his dog. It became one of the most brilliant television shows you will ever see.

As usual, Jim Henson drew on amazing talent to bring his ideas to life. Don’t believe me? Well, the award-winning Anthony Minghella, who wrote and directed many well-known movies like The English Patient and The Talented Mr. Ripley, wrote the scripts.

The stories told throughout the series will feel familiar to anyone who loves fairy tales. Ever hear a story of a woman who wished for a child but got a bit more than she bargained for? That’s what happens in the episode “Hans My Hedgehog.” Perhaps you’ve been told a tale about princes turned into birds and the sister who must keep silent for years to break the spell on them? Then you might be familiar with the plot of “The Three Ravens.” Surely you are familiar with the idea of evil stepsisters? Then you might know a bit about the tale of “Sapsorrow”.

At the same time as he uses these well-known elements, Jim Henson then keeps the stories fresh by adapting the tales, mixing some familiar traditions with others, adding and incorporating new details and perspectives that make them even more enthralling. For example, many of the heroines are very involved in shaping their own destinies. They are not as passive as you might read about in some stories.

For example, my favourite is the heroine Sapsorrow who runs away from her wicked father and goes in disguise to work as a drudge in a castle. The prince is not the embodiment of goodness you might usually find in some stories. Well disguised Sapsorrow is not afraid to tell him her opinion of him, causing the prince to become more introspective about the way he treats others. We get to watch him learn his lesson and become more worthy of our brave heroine.

Many of the stories are also romances. They are bewitching and amazingly well told for a half hour episode.  Moreover, I also love is that the creators are not afraid to explore a darker side to these tales. So, not every story has a completely happy ending. As the credits roll, we are sometimes left with a definite feeling of bittersweetness or sadness.

…explained their present with stories…

Soldiers And Storytellers, Princes And Princesses, Dogs and Demons And More!

Besides the interesting tales, it’s the acting in Jim Henson’s Storyteller that really amplifies the beauty of it all. The best of the lot is the astonishing and enthralling John Hurt who many fantasy and science fiction fans may have heard of. Hurt is the perfect storyteller my dearios as he might say himself. With his wild hair, slightly ragged clothes, his fingerless gloves and his troll-like nose, he makes a whimsical figure, and he is a true tale teller. If you’ve ever sat down and listened to a master storyteller and found yourself drawn in, you will know exactly what you’re getting into here.

As The Storyteller states,

“I am a teller of stories, a weaver of dreams. I can dance, sing, and in the right weather. I can stand on my head. I know seven words of Latin, I have a little magic, and a trick or two. I know the proper way to meet a Dragon. I can fight dirty but not fair. I once swallowed thirty oysters in a minute. I am not domestic, I am a luxury, and in that sense, necessary.”

It’s as interesting to listen to him as it is to see the stories acted out as they are incorporated into the narrative. His audience is also fascinating. For some reason, this excellent tale-teller has no one else to talk to except his dog.

A creature as scruffy as his master – this gruff-voiced creature, performed by Henson’s son Brian, takes on the part of asking questions, pressing the storyteller for more details and sometimes scoffing at his master. “I’ve heard this story, and you’re telling it all wrong, ”he interrupts him during one of the tales. Their back and forth is delightful.

“What a noodle you are, frightened of a little thing,” the Storyteller tells his pet when he confesses a distaste for spiders. “You’re afraid of rats!” Dog challenges him. “Everyone’s frightened of rats. They’re rattish. That’s normal,” comes the reply. “Why?” (Suddenly fearful and holding up the hem of his robes.) “Have you seen a rat?”

In the scenes where we see the story acted out, there are many memorable and captivating actors. Miranda Richardson, of course, makes a frightening and therefore perfect wicked stepmother in “The Three Ravens.” Meanwhile, many viewers’ favorite is Bob Peck as the clever man down on his luck in “The Soldier and Death.” You might even recognize a certain Sean Bean in an episode. He plays the handsome sweetheart in “The True Bride.” Then there’s Dawn French as one of Sapsorrow’s hilarious and ridiculous wicked stepsisters.

…foretold their future with stories…

Aside from the stories, the visuals were just as magical. With characteristic skill and inventiveness, Jim Henson and his crew created magic with his puppetry and visual effects. The lighting is soft and beautiful and adds to the feel of a fantasy. Nothing is overblown, everything naturally and organically works well together whether we’re dealing with humans or characters which have come to life in the Creature Shop. The Storyteller and his dog are clearly old friends and not an actor talking to a puppet. The soldier of “The Soldier and Death” casually plays cards with what seems like hundreds of nastily cute red devils. A boy comes face to face with a disturbing goliath in “The Heartless Giant.”

RELATED | Romantic Moment of the Week: Confessions of a Smitten Star (Tristan and Yvaine in Stardust)

Furthermore, while some of the visuals are simply gorgeous, expect to see some creepy images which perfectly capture the dark against light which is reflected in so many tales. If you’ve ever watched the workings of the creatures in Jim Henson’s other productions, there will be plenty to enrapture you.

Even the transitions from the scenes of the Storyteller to the setting of his tales can be magical. The Storyteller might roll an object across the floor and suddenly it’s rolling to the feet of the king in the story he is telling. As they stare into the fire, a scene might manifest itself. At one point the treacherous magical sack from “The Soldier and Death” is lying discarded on the floor while man and dog chat.

…the best place by the fire was kept for… the Storyteller!

The Stories End But Now We May Watch Them Again!

If you ask me, dearies, the only fault of this adaptation is that Jim Henson did not create many episodes. He went on to produce only four more episodes called The Storyteller: Greek Myths starring Michael Gambon as another excellent chronicler, but there were no more afterward. So there’s your bittersweet ending for you.

As I draw my story to a close, I will risk a look into the future and foretell that you too will fall in love with this series. Purchase The Storyteller and The Storyteller: Greek Myths on DVD on Amazon. I can guarantee that you will then live happily ever after in viewing bliss as you watch and re-watch the episodes. The End. 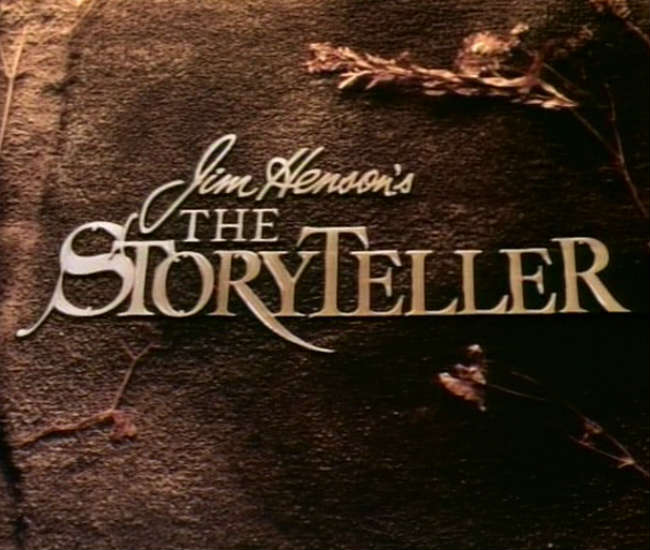