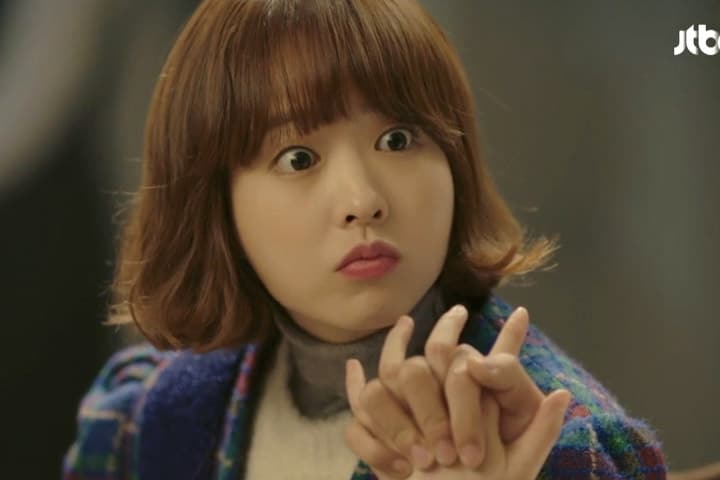 Things are heating up in Bong Soon’s world as the kidnapper comes way too close for comfort. Meanwhile, Bong Soon and her two love interests’ lives are becoming hilariously entangled in a laugh-out-loud love triangle!

After hearing the voice of the kidnapper, Bong Soon searches through the crowded streets but can’t find him. She confides to Min-Hyuk that she saw the kidnapper again. Min-Hyuk calls Gook-Du and tells him. 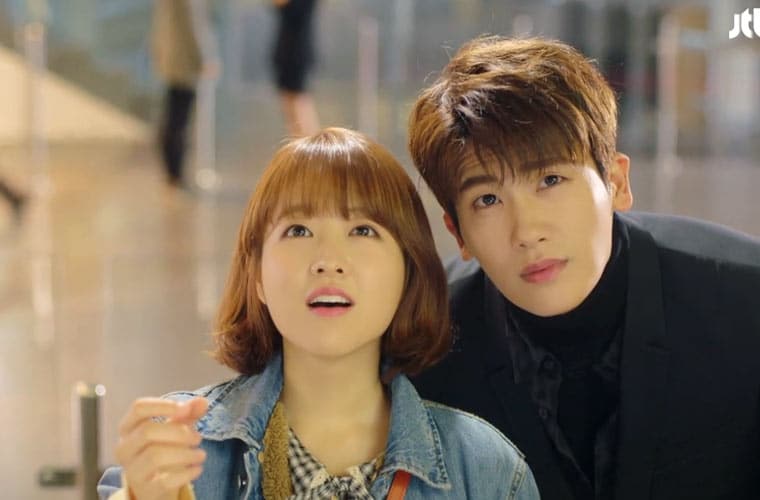 While at Min-Hyuk’s office, Bong-Soon is mortified by a viral video of her at the club a few days ago, drunk and carrying a heavy pole she accidentally ripped out of the floor. Min-Hyuk teases her about it but secretly calls and has the video removed from the website.

Gook-Du comes by the office. He’s going to personally guard Bong-Soon now. Min-Hyuk and Gook-Du argue over who gets to take Bong-Soon home. Bong-Soon gleefully tells them not to fight over her. She realizes it’s not about her though when they change their minds and start fighting over who has to take her home.

While buying tofu to eat with Bong-soon, her best friend Kyung-Shim gets attacked by the evil masked kidnapper! He mercilessly beats her while she tries to crawl away. Bong-Soon appears and gets a good crack at the kidnapper’s ribs before he runs away. She cries over her friend and rushes her to the hospital.

Bong-Soon feels terrible that she didn’t go out for the tofu instead of her friend. Gook-Du is super worried about Bong-Soon, who has crossed the kidnapper’s path three times now. He tells Min-Hyuk to hide her at his house and warns him to stay away from Bong-Soon as well. Min-Hyuk senses that Gook-Du probably likes Bong-Soon.

The next day, Gook-Du escorts Bong-Soon to her job. On the way, he comments at how she shouldn’t try to look too pretty around her boss. She’s over the moon at his comment. Bong-Soon stays over at Min-Hyuk’s house. Late that night, the doorbell rings. Gook-Du shows up. He says he’s worried about Bong-Soon; he’s going to sleep over too!

Gook-Du says he’ll sleep on the couch but Min-Hyuk offers to share his room. Bong-Soon blurts out that (she thinks) Min-Hyuk’s gay. Then Min-Hyuk blurts out that Bong-Soon is his bodyguard. Annoyed, Gook-Du accuses them both of playing with him. Uncertain of what to do about the sleeping arrangements, they decide to pull an all-nighter.

The night quickly turns into a macho battle as Min-Hyuk and Gook-Du turn pool, darts and finally drinking into competitions. Bong-Soon is annoyed especially when she’s the one carrying them home. She’s hilariously thoughtful to Gook-Du, putting a blanket on him, gently lying his head down, and careless with Min-Hyuk, letting him just lie on the floor.

The next morning, the boys awake to Bong-Soon’s breakfast. She asks the boys if they remember what happened last night; we learn they were so drunk that Gook-Du started dancing with Min-Hyuk, calling himself Cinderella, and tried to kiss him if not for Bong-Soon’s intervention.

At the office, Bong-Soon finds out that Min-Hyuk took down the viral video of her at the club. She thanks him and promises to help him find his stalker. Min-Hyuk jokes that Bong-Soon is a peanut sized King Kong. She confides to him about how the powers run in her family. He suggests that she start training to hone her powers and offers to help her. 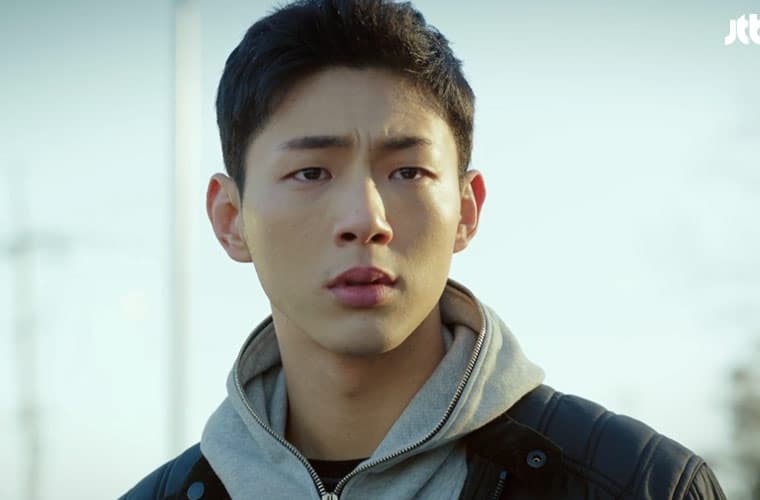 Gook-Du’s girlfriend, Hee-Ji, confesses to him that she’s falling for his friend. Min-Hyuk takes Bong-Soon to his family’s house for dinner again. Dad tells Min-Hyuk to get married now and suggests an alliance with a rich girl. Min-Hyuk shocks Bong-Soon by calling her his girlfriend. She’s super mad on the way home. He tells her it was just to get his dad off his back.

The next morning, Min-Hyuk takes Bong-Soon out for some training but is only awed by her strength as she effortlessly pulls dozens of tires. Afterward, Bong-Soon is questioned at the police station for her statement about the criminal who beat up her friend. She tells Gook-Du that the criminal ran away after she screamed, but he seems unconvinced the criminal would be scared that easily.

Bong-Soon’s grandma shows up in town. She beats up some gangsters harassing a young lady, showing that the incredible female strength in Bong-Soon’s family is still going strong. That night as Bong-Soon sleeps at Min-Hyuk’s house, someone sneaks into his room and puts a knife against his throat.

Yay! Strong Woman Do Bong Soon delivers another solid two hours! The stakes continue to raise as well as the hilarious fun and heroic hijinks!

Everyone continues to be delightful, especially our little heroine, Bong-Soon. I love watching her teach baddies a lesson. There are so many hilarious moments with her shocking jerks with her super strength. But the show is bringing on the tension as well, especially with that moment when Bong-Soon faced the evil kidnapper. Seriously that guy is so freakin’ evil! It was really horrendous watching him beat up Kyung-Shim and I really wanted Bong-Soon to pound him into the ground. Obviously, Kyung-Shim was her first priority, which is why I think she didn’t pursue him when he ran away. Even though Bong-Soon has super powers, she’s just as human as any person, which showed as she sobbed in the hospital, fearful for her friend’s health.

Gook-Du continues to be utterly hilarious and adorkable to me. He’s so serious about police work and justice and doing things the correct way. I laughed when Gook-Du confronted Min-Hyuk for talking informally to him when they’re the same age (usually same-aged people would start out talking politely/formally); Gook-Du tried to talk informally back but ended up falling back to formal speech, haha. He can’t help himself; he’s just such an adorable rule-follower.

But it’s Min-Hyuk who continues to win my heart!! His adoration for Bong-Soon is becoming more and more evident, but sadly she can’t seem to see it yet! This is causing some mild jealousy on his part as he keeps seeing Bong-Soon mooning over Gook-Du, which leads to some hilarious moments. Like his shock and horror every time she pretends she’s weak to get Gook-Du to help her (like opening the jelly jar, haha).

I can’t wait until Bong-Soon starts to notice Min-Hyuk as a potential guy and not just the boss who drives her batty. While Gook-Du is pretty sweet and loyal, Min-Hyuk is the guy she can be truly herself with. She never has to pretend with him or try to change herself. He actually likes her strength (even if he gets a little scared)! And that’s priceless!

What did you think of the latest episodes of Strong Woman Do Bong Soon? Let me know in the comments!

Our romance-themed entertainment site is on a mission to help you find the best period dramas, romance movies, TV shows, and books. Other topics include Jane Austen, Classic Hollywood, TV Couples, Fairy Tales, Romantic Living, Romanticism, and more. We’re damsels not in distress fighting for the all-new optimistic Romantic Revolution. Join us and subscribe. For more information, see our About, Old-Fashioned Romance 101, Modern Romanticism 101, and Romantic Living 101.
Pin this article to read later! And make sure to follow us on Pinterest.
By Faith White on March 14th, 2017