The fascinating life that is the 4’11” Queen of England known as Victoria continues to unfold in last night’s episode of ITV’s Victoria.

Victoria Episode Five (which is again a stellar example of what good television is) features plenty of humorous shenanigans. It picks up with a newlywed Victoria blissful, lying in her husband’s arms…

Speaking of which, the episode begins with a chuckle when the unmarried Baroness Lehzen walks into the bedroom. Her rapid retreat (in response to seeing Victoria caught up in Albert’s embrace) is all polite awkwardness!

Back to the Business of Politics

After two blissful days away, the honeymooners return to their home with precious little time to be alone. As they settle into daily life as man and wife, talk of heirs begins to swirl around the nervous Victoria as do plans for a state dinner. Of course, feathers are ruffled when the way things are done puts Albert (again) walking two steps behind his wife.

Eventually, Victoria is asked to publicly speak at an abolitionist meeting. Though she supports the issue, she declines, citing reasons of her public figurehead as an opposition. Still, in pursuit of a title or task he can undertake, Albert agrees to be a speaker at the meeting much to the pleasure of his wife.

An illness spreads among the poorer sections of the city. A part of the city where Miss Skerrett’s cousin lives, and as a result, Skerrett is denied entrance.

The pursuit of Miss Skerrett by the persistent Chef Francatelli continues. First, he shows her who he is by helping to get a letter to her cousin. Later, he requests one thing in return. He wishes to know her given name. She seems agreeable to this, and with little hesitation, she tells him it’s Nancy.

Eventually, as history has proven, the Queen wins her battle regarding Albert’s place at her side. She sets about doing this by bribing her uncle (played by none other than David Bamber aka Mr. Collins!), who is perhaps the only member of her family to be happily married. Only trouble is, his wife hasn’t been welcomed to court. Once Victoria learns this, she plays on his heart and affection for his wife. The end result being she welcomes her to court. (A character that screenwriter Daisy Goodwin cameos!)

Victoria claims a happy victory while Albert concludes that this is, again, not a victory as a team, but a solo win for his wife.

In parliament and Sir. Robert Peel is where Albert finds success. His speech impresses many, leaving Victoria feeling proud. Where their prior victories have been those of his wife, this one, she tells him, is all his victory and “not mine.”

Last night’s episode again exemplifies why Masterpiece Theatre is brilliant television. To round out the recap, we also learn the following things. 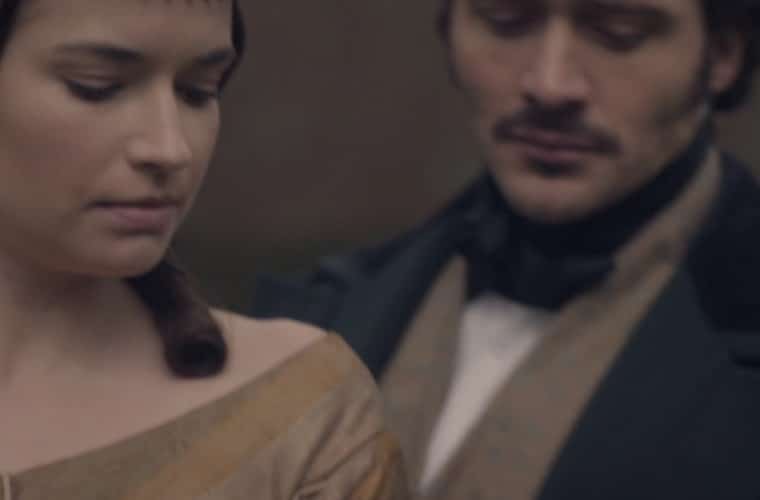 + Though I’ve talked little of it, Ernest develops a fondness – affection? love? – for a certain lady. A romance (or rather what could be) that lingers but never matures is that between Ernest and Harriet. Last night, he bid adieu to Lady Harriet, a married woman in at court. It’s an attraction Albert observes and prepares to put a stop to. When Ernest tells Harriet his feelings are more than “harmless,” she denies him. While unhappy in her marriage, Harriet chooses duty over the scandal a relationship between them would stir.

+ Not prepared to have children, Victoria uses preventative measures by jumping up and down on her settee while Albert sleeps. Her ritual is found out when she’s caught by her husband who tells her the advice given her by the Baroness is quite wrong. The only way to prevent pregnancy, he tells her, “is abstinence.” Moving in closer, he asks, “Is that what you want?” The two kiss as the episode ends.

What did you think of Victoria Episode Five? Sound off below with your thoughts. I look forward to reading them.

Read all of our Victoria recaps!