Rogue One: A Star Wars Story Review – The Most Romantic Star Wars Film Since ‘The Empire Strikes Back’ 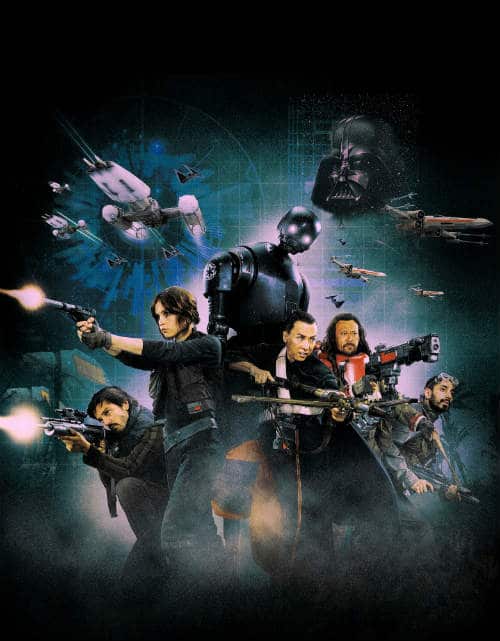 Rogue One captures what The Force Awakens failed to do: the spirit of the original Star Wars films. (Sorry but emo Kylo Ren as the offspring of Han and Leia just did not do it for me.) More than that, however, Rogue One, tells another epic space opera story with memorable characters that make the original films feel even more complete.

Set not too long before “A New Hope” begins, Rogue One answers how the Death Star plans were stolen. It is these death plans (in Princess Leia’s hands) that lead the way to victory at the end of “A New Hope.” For fans who ever wondered how these plans were attained in the battle mentioned in “A New Hope” prologue, this is the Star Wars film for you!

When just a girl, Jyn Erso’s mother gets killed by leaders from the Empire. Her engineer father (Mads Mikkelsen) then gets taken to work on a superweapon known as the Death Star. This terrible weapon can destroy planets with just one blast. 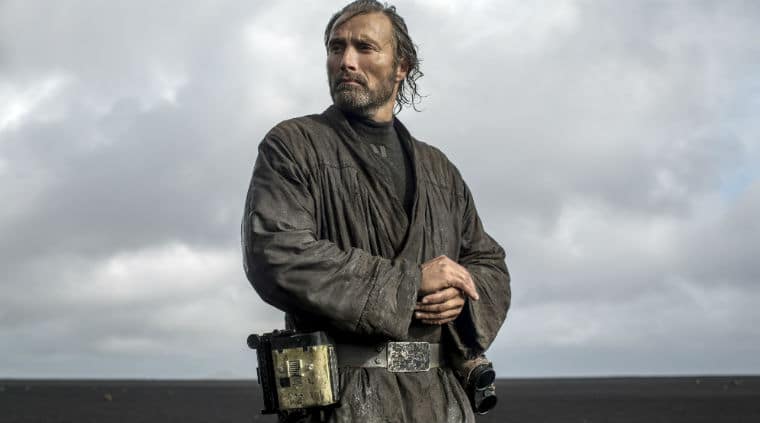 Years later, Jyn (played by the talented Felicity Jones – who I can’t help but always think in connection to Northanger Abbey) was rescued and raised by a resistance leader named Gerrera (Forest Whitaker’s odd performance probably the weakest aspect of the film). Later abandoned as a teenager, Jyn is once more on her own. Stuck in prison, the Rebel Alliance breaks her out. Reports surfaced of an Empire pilot gone rogue with some important intel from her father. And because of her connections to both her father and Gerrera, the Rebel Alliance needs her help! 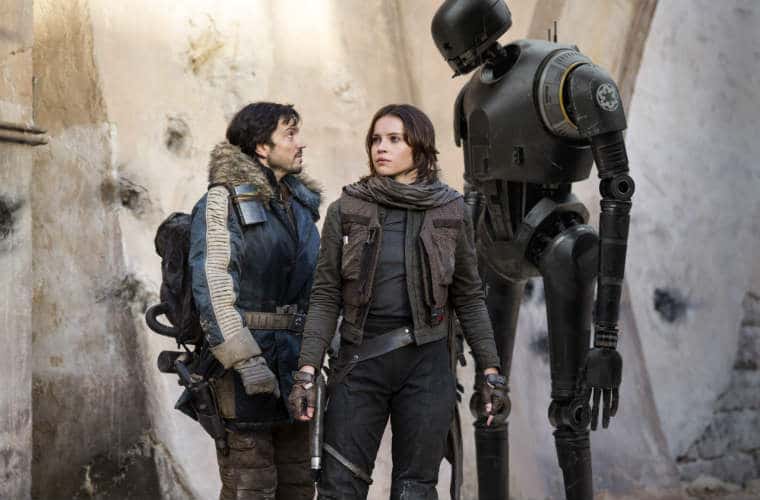 Unfortunately, Jyn has no interest in politics and only helps them reluctantly in exchange for her freedom. Then she joins forces with a resistance fighter named Cassian (played by Diego Luna who I absolutely adore in this role) and everything changes. Cassian has done everything for the Resistance. He has even made morally gray choices in the name of the rebellion against the Empire. He’s a killer that follows orders, but can he overcome that in order to attain redemption and fight against the Empire at the same time?

After finally meeting up with Gerrera, Jyn watches a hologram of her father. In charge of the development of the Death Star’s weapon, he implanted himself amongst the Empire so he could destroy if from within. In order to do so, he designed a flaw, a flaw, the rebels would later use to destroy the Deathstar in “A New Hope.” But first, the plans need to be stolen. 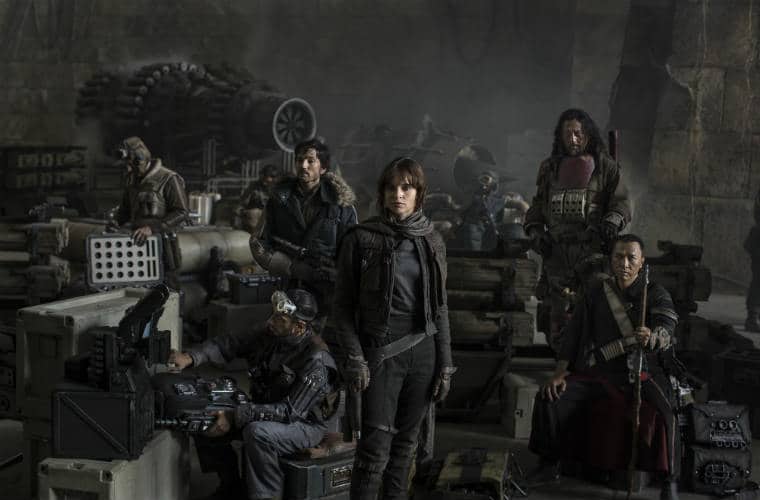 The Team of “Rogue One”

With a newfound hope and desire to fulfill her father’s wishes, Jyn and Cassian become unlikely allies with the help of a rude, mistrusting enforcer droid named K-2SO (voiced by Firefly‘s Alan Tudyk). They also join forces with the blind, but faithful believer of the force, Chirrut Îmwe. Then there is the fierce fighter Baze Malbus and redemptive New Republic pilot, Bodhi Rook. Together, they name themselves Rogue One, a perfect name for the rebels of the Rebel Alliance. Their plan? Infiltrate the headquarters on the planet Scarif in order to obtain the Death Star blueprints.

Their task is one of sacrifice and hope, with the knowledge they have very little chance in succeeding. The battle begins and our heroes attempt the impossible but can they succeed with everything stacked against them? 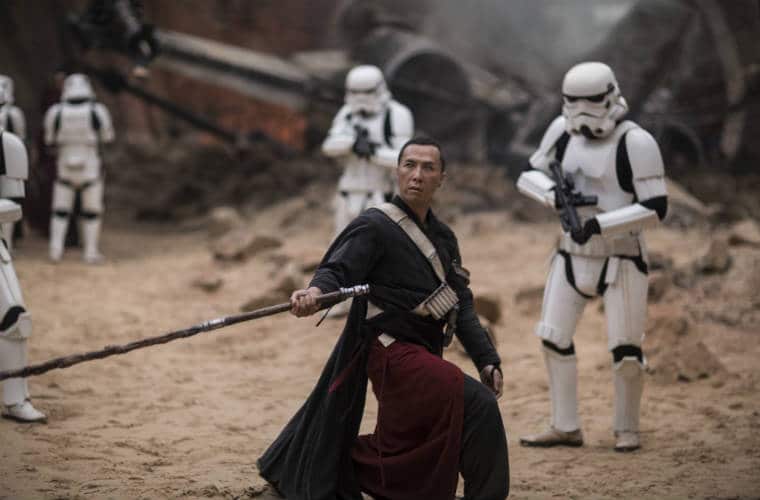 What transpires is both exciting and emotional. More than any of the films since Return of the Jedi, Rogue One takes the Force and makes it believable once again. I could feel the spiritual power of the Force in the film right down to the goosebumps on my arms, the Force no longer a caricature of its former self. The film surprisingly achieves this without a Jedi to lead the way, but rather through the believers of a dying religion. The faith of the blind Chirrut Îmwe who uses his faith in the Force “to see” is both powerful and beautiful to witness onscreen. 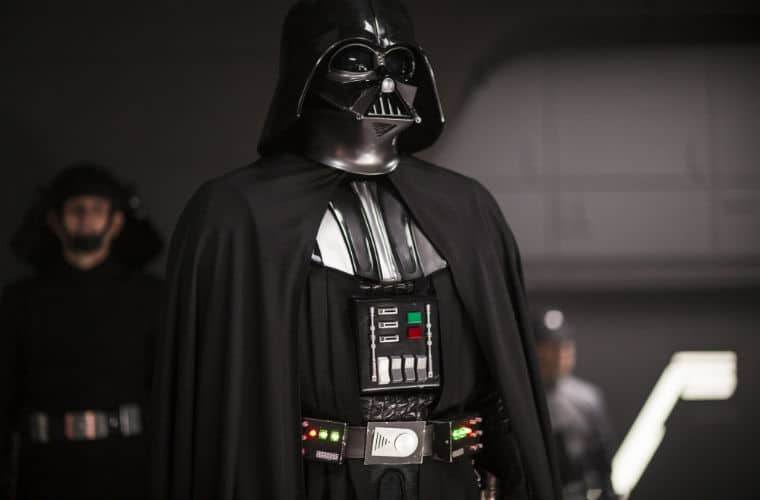 No longer a shadow of his former self, Darth Vader also makers a powerful comeback. In his brief appearances, Darth Vader is ferocious and truly villainous. One fight sequence was particularly exciting and chilling.

What truly sets Rogue One apart from other films, however, is the focus on the characters rather than on action. While the action scenes are still amazing, I appreciated the quieter moments. Jyn and Cassian particularly stand out as they feel like fleshed out real characters rather than the cardboard cutouts given to us in The Force Awakens. Sorry, but the main three characters were dullsville central… Felicity Jones plays Jyn as a flawed female heroine who grows into a leader with ease while Diego Luna captures the dark but good spirit in Cassian with an intense charisma that kept me glued to the screen. The two actors also had quite the believable chemistry. 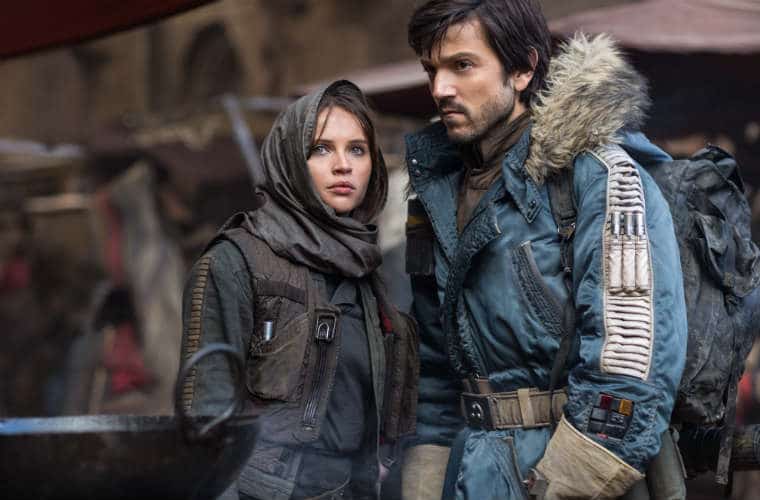 And while some are cheering on the “feminist” lack of romance (Teen Vogue I am looking at you), they missed the entire point of the film. First of all, it is absolutely ridiculous to call a film feministic simply because of a supposed lack of romance – which was actually one of the main aspects of the film. Perhaps many viewers can no longer recognize subtext? If people aren’t kissing or sleeping together or literally confessing their feelings aloud, then there must be no romance, correct? Wrong. Still, there is nothing wrong with romance. It’s when women are objectified or simply turned into “the girlfriend” role that is the problem.

That all said Rogue One can’t be “A New Hope” or “Return of the Jedi” where romantic happy endings are possible. As Cassian points out through subtext, they don’t have the luxury to get close, to live normal lives. Rather, these characters are the ones who must sacrifice to offer hope to those who come after them. Without the fighters of Rogue One, Princess Leia and Han Solo would never have met. On a side note, I’m still seething from “The Force Awakens” breakup!!

Indeed, the entire movie Rogue One has subtext and old-fashioned romantic elements sprinkled throughout. It is about what isn’t said because they can’t say it rather than literal proclamations of love. (Which, by the way, wouldn’t have fit the film at all.) Looks, conversations with double meanings, and the romantic ending pretty much says it all in my book. And as a huge lover of old-fashioned and intelligent romance over cheesy scenes of hooking up, I absolutely loved every scene between Jyn and Cassian. How people missed the romantic tension is beyond me…

Aside from the characters and romance, however, the major standout of Rogue One is hands down the visual effects. In order to create believable continuity, the visual effects team used new and advanced technology to bring back one of the now dead stars of “A New Hope:” Peter Cushing. The CGI really made me believe this familiar character came back to life on my screen and I loved it! There are few other surprises in the film as well, but I won’t spoil the fun!

Overall, Rogue One definitely deserves your time. Well written (with actual good dialogue), fantastic acting with a diverse cast, a believable story to set up “A New Hope, and striking visual effects all weave together effortlessly to tell a story from a galaxy far away and long ago. Make sure not to miss this one on the big screen!

Where to Watch: In theaters. Rogue One will be available on Digital March 24, 2017, and DVD April 4.

What did you think of Rogue One? Sound off below…

105shares
We use cookies to ensure that we give you the best experience on our website. If you continue to use this site we will assume that you are happy with it.OkNoPrivacy policy