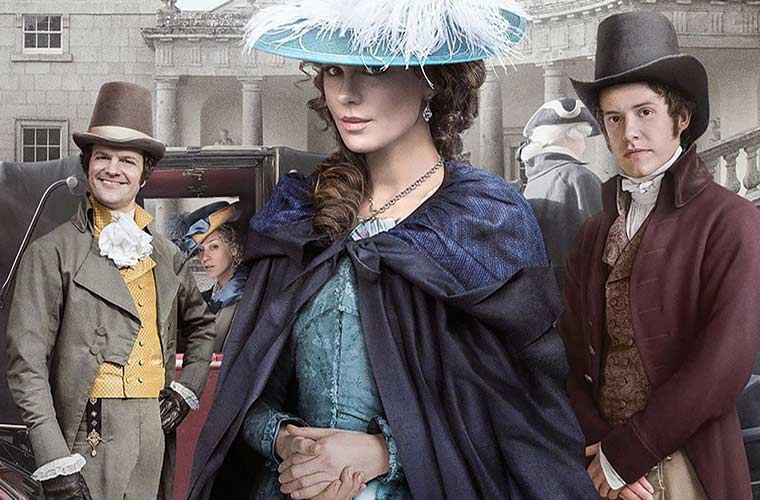 Love & Friendship is an adaptation of the lesser known and short Jane Austen epistolary novel, Lady Susan. Unlike the rest of Austen’s works, the main character schemes and manipulates in true Becky Sharp fashion. Lady Susan is selfish, a terrible mother, and is shockingly carrying on an affair with a married man. On the other hand, she’s also incredibly intelligent, her lines dripping with wit. One can see how Jane Austen’s novels evolve into the masterpieces of irony she would later pen. Whit Stillman, the writer/director, does an incredible job of capturing this same Austen spirit. The witty dialogue and memorable performances truly make Love & Friendship a period drama success.

Even though Love & Friendship is not an entirely faithful adaptation, it captures the essence of Austen’s short work. This is particularly thanks to the memorable and award-worthy performance by Kate Beckinsale as Lady Susan. She can be both terrible, funny, and charming all at once and that is quite a feat for any actor to pull off.

The story itself, for those unfamiliar, follows the widow Lady Susan’s schemes to find a new rich husband for both herself and her timid daughter, Frederica. While Lady Susan chases a younger man named Reginald De Courcy (in the midst of having an affair with a married one), Frederica attempts to escape a loveless engagement with the boorish Sir James Martin. Think Mr. Collins if you will. In the meantime, the sweet Frederica begins to feel a romantic attachment to Reginald, the same man who has been blinded by her plotting mother.

Driven by characterization and dialogue, Love & Friendship can only be enjoyed by those who listen intently to every hilarious line. Similar in style to the 1999 adaptation of Mansfield Park, the cleverness and wittiness put forth truly makes the film stand out in the midst of all the crude films parading the screen. Dialogue driven scenes between Lady Susan and her American confidant, Alicia Johnson remain some of the best moments of the film. For instance, Lady Susan remarking on the hopeful death of Alicia’s husband so their friendship could be rekindled. Alicia’s husband had the misfortune of disapproving a friendship with such an immoral woman after all. The delivery of this dry interchange by both Beckinsale and Chloë Sevigny is pure gold.

The lack of romantic development between Frederica and Reginald remains the main weakness in Stillman’s adaptation. With the remorseless, conniving Lady Susan as the protagonist selfishly plotting her own future much to the detriment of Frederica’s, I wanted to root for Frederica and Reginald (who is a bit of a gullible fool) more than I did. There just needed to be something more. And as the novel itself is short, a movie should have been given plenty of time to deepen the romance between these two. Stillman had an opportunity to pay homage to the romances in Austen’s more romantic works but regrettably did not. Nevertheless, I still liked Frederica and Reginald and enjoyed watching Reginald’s family do some scheming of their own to play matchmaker with their preferred choice.

Overall, I loved Love & Friendship immensely. If you like intelligent films with wit and class (much in the style of a Wilde play), then you will like this film. Just don’t go in expecting a Pride and Prejudice esque love story. Oh, and be sure to watch it twice. There are several lines you just might miss the first time around…

What do you think about Love & Friendship? Sound off below…