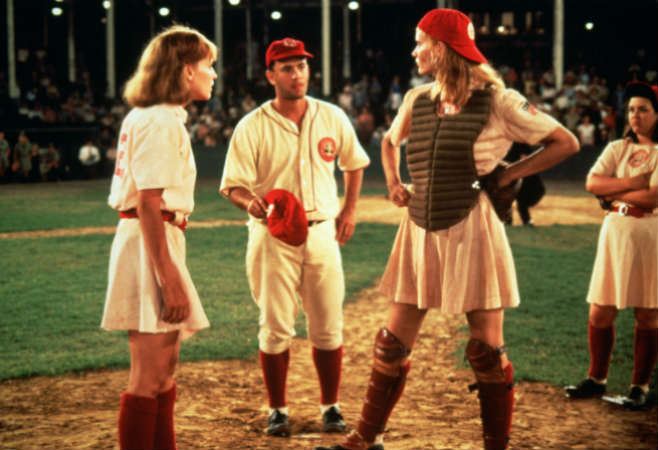 A League of Their Own Review

A League of Their Own is a heart-warming period drama and sports movie about an unusual chapter of American Baseball history. Based largely on truth, it follows the creation and successes of the All-American Girl’s Professional Baseball League. During the Second World War, with so many of the male players away fighting in the war, it was determined that the stadiums would stay open with women replacing men, much like they did in the factories. The league existed for twelve years, yet sadly, until this film came out, very few people knew about it.

The story follows Dottie and Kit, two sisters who leave their jobs at a dairy to try out for one of the women’s teams in the big city. They make it onto the Rockford Peaches along with a ragtag group of other women from all over the country. But all is not smooth sailing after this; the Peaches have to contend with an embittered coach, a public that won’t take them seriously, wary investors and even fighting amongst themselves. It will take all their skill to convince everyone that women really do belong in baseball, after all.

A League of Their Own is a very well put together film which really seems to capture the essence of the time. The film has a tremendous warmth and sense of nostalgia. It really celebrates these extraordinary women as the pioneers that they were.  Unfortunately, in viewing the past this way we are also confronted with the sexism that these women had to endure. They are chosen for looks as much as skill. They are put into uniforms that sexualize them and which do not protect their legs properly. Most ludicrous of all, they are sent to charm school. One can imagine the outcry if these things were done to male players.

The film was directed by Penny Marshall who also helmed Big (also starring Tom Hanks) and the excellent Riding in Cars with Boys. The film boasts a star-studded cast that includes Geena Davis, Tom Hanks, Rosie O’Donnell, Madonna, Bill Pullman and Lori Petty. All are good. Hanks and Davis play off each other well with subtle romantic undertones. Madonna and O’Donnell make a good comedy duo. The supporting cast is strong, bringing to life a collection of different personalities that knit together well.

It is a funny, enjoyable film with characters you really care about. Much like Wimbledon, A League of Their Own is a film about a sport that will appeal to fans and non-fans alike, which is no easy feat. A thoroughly entertaining and nostalgic journey about these inspiring women. If you haven’t seen it already, you really should give it a chance.

Content Note: A nasty bruise is shown from a character sliding on the gravel. There are a few mild uses of profanity. There are a few spoken references to sexual situations though no sex or nudity appears in the film.