“Always together, eternally apart” – The Beauty of the Curse of Ladyhawke (1985) 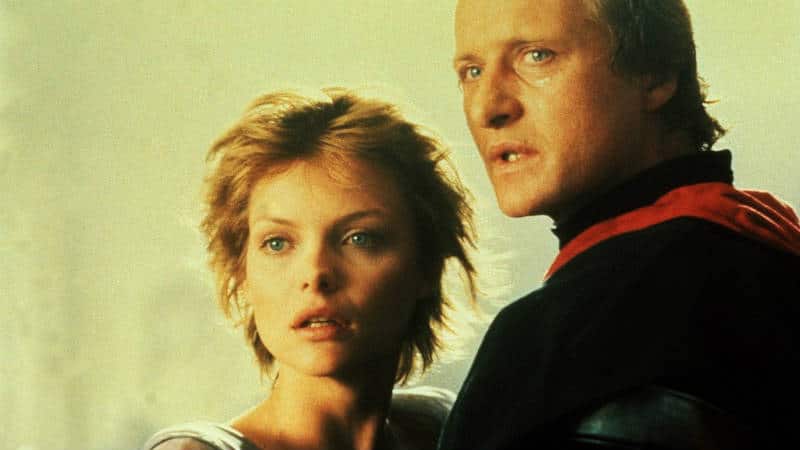 I’ve often wondered if the plot of the 1985 fantasy adventure, Ladyhawke was based on a specific myth. It certainly incorporates elements of folklore from around the world, but I haven’t been able to find evidence to suggest there’s a specific story of a cursed shapeshifting knight and a lady out there in the world. If not, I think this movie is a worthy addition to the stuff of legends.

I used to watch this fantasy adventure whenever it was on television years ago and watching it again recently for this article, I found myself getting lost in the story despite its faults. I think there are far too few good fantasy films out there, and I highly recommend that lovers of this genre find Ladyhawke and watch it right away. 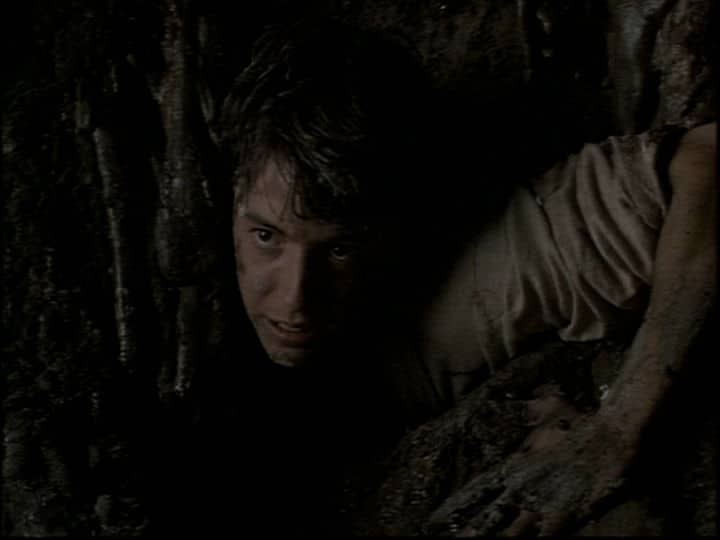 Being a thief means you have to be able to get out of tight spots.

Ladyhawke is told from the perspective of Philippe Gaston, an impossibly young looking Matthew Broderick before he was Ferris Bueller. Philippe’s known as the Mouse, and for good reason. He’s a thief and adept in the necessary skill of getting out of tight situations. As the movie opens, he is literally escaping from the most impregnable jail imaginable in the medieval city of Aquila by squeezing down a drain no one else can fit into. “This is not unlike escaping my mother’s womb,” he mutters to himself. “God, what a memory.” 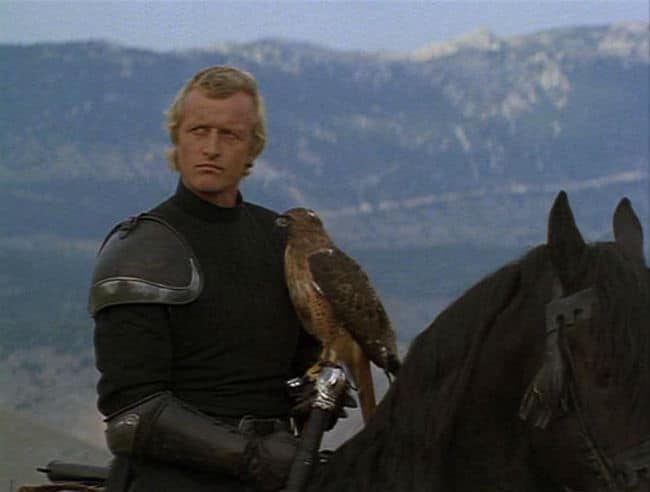 Nothing can stop Navarre from completing his deadly quest for revenge

Philippe’s amazing breakout catches the attention of the guards of Aquila who need to get him back to maintain the prison’s reputation of being inescapable. As he flees, he also draws the attention of an intimidating and mysterious man named Etienne Navarre traveling with a hawk on his wrist. Navarre (Rutger Hauer) saves Philippe from capture but has an ulterior motive. He wants the Mouse to help him get into the city where he just escaped because he is bent on completing his life’s mission – to kill the Bishop of Aquila. Philippe is understandably reluctant, especially with such an intimidating companion. All in black, riding a gorgeous, massive black war horse and with the hawk mysteriously in tune with his needs, Rutger Hauer does justice to Navarre. As the former captain of the guard, he is very convincing – fierce and a ruthless fighter, a figure of mystery and danger.

He compels Philippe to accompany him and the boy complies because he must and finds himself in peril on their first night when a huge, ferocious black wolf appears out of the night. Unable to find Navarre to protect him, Philippe uselessly struggles to try to kill it with the knight’s crossbow. Suddenly a beautiful woman (Michelle Pfeiffer) he has never seen before appears in the darkness and stops him. The wolf comes to her, docile and no longer enraged, and Philippe finds that he has stumbled onto a mystery.

As he becomes embroiled in this strange tale, he discovers that it is a story of enduring love, hellish evil, lust, revenge, and desperation. How can Philippe resist getting involved, and how can we? As he continues to travel with the man and his hawk, the young thief learns more about him and the mysterious woman. He meets a dissolute priest named Imperius, a former confidant of Navarre’s, and learns that the woman is Isabeau d’Anjou, the knight’s dearest love, and the two are cursed. She is transformed into the hawk by day, and he becomes the black wolf by night, and they can never be together as humans. “Always together, eternally apart” and it will be so as long as there is night and day. Navarre is concerned mostly with exacting revenge on the Bishop who is the one who cursed them. He has no other hope in life as he cannot be with the woman he will always love and cannot touch. 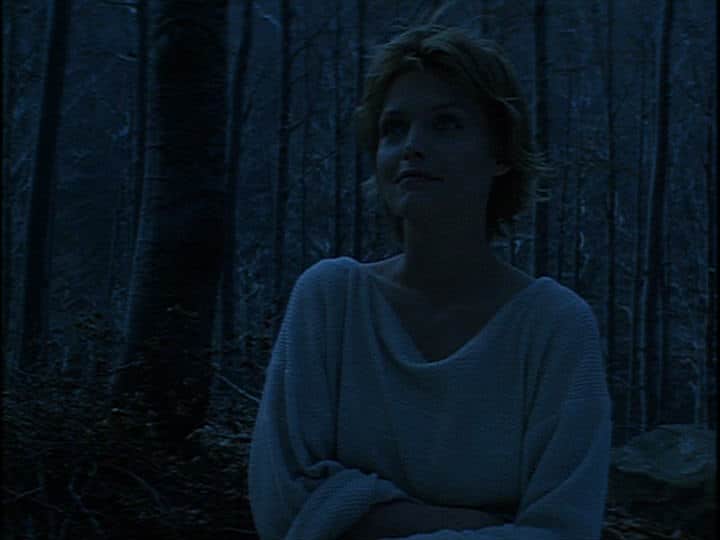 As romance goes, this movie certainly delivers. Rutger Hauer is deadly and cold when necessary, but when it comes to the woman he loves, his adoration and raw passion is intense. As Isabeau, Michelle Pfeiffer is supposed to be someone everyone had fallen in love with in their own way as Imperius observes, and it’s believable. Even Philippe is awed by her from the first and describes her as the “face of love.” Pfeiffer manages to be more than an object. Despite the weight of her curse, she has light-hearted moments. Yet she is mindful of the hopelessness of her situation. “Are you spirit or flesh?” asks Philippe at one point. “I am sorrow,” she replies wearily. She is courageous too and clearly as devoted to Navarre as he is to her.

Broderick is an enjoyable component of the story. He’s a constant chatterer and even when alone he is talking mostly to himself and to God, promising to be a better person whenever he is saved from peril and then going straight back to thieving and to lying which he does quite a bit – whenever he’s awake for example. He’s a good storyteller, embellishing messages he carries from Navarre to Isabeau, seemingly for no other reason but because he can. His character is meant to hold the threads of the story together with comedy, determination, and compassion, and he manages his role well. 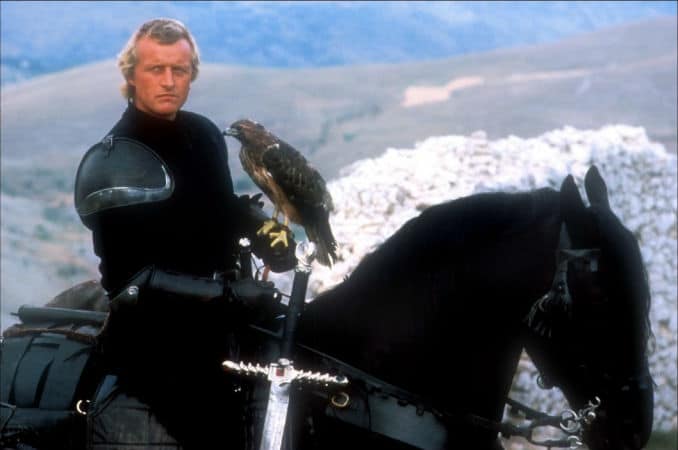 The special effects are very much of the eighties, but they still add to the atmosphere of the story. The action is set in Italy and there are many beautiful scenes of the countryside and medieval architecture. The adventure captivates us as we follow Navarre who is obsessed with his revenge and is dangerously resigned to facing his doom when he’s done the duty he’s set himself. Only Philippe and Imperius think there’s hope, and it’s a very slim one. The final scene is appropriately suspenseful and mythic and satisfying. 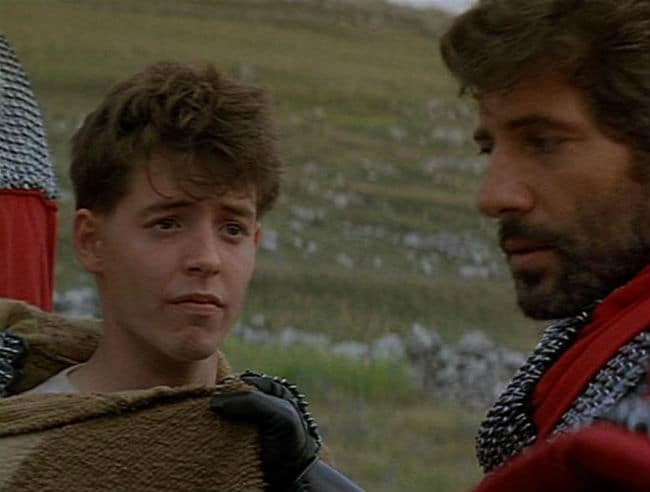 Watching Ladyhawke now after many years, I am reminded of the biggest issue I have with it. In some action scenes, the film’s composer thought it fit to add some truly awful music with synthesizers. It unintentionally adds a layer of cheesiness to some of the action. A soundtrack should at best lift the emotion of a scene and at worst be unnoticeable. In Ladyhawke, I sometimes find myself consciously trying to ignore the music. Fortunately watching it again, I realized that the music is not pervasive throughout the movie, so it doesn’t disrupt too many scenes. The thrilling ending scene, for instance, has no background music at all which works perfectly.

I also noted that curse or not, Isabeau has a lot to bear in her situation, more than Navarre. She loses a lot of her independence. Not surprisingly because of the time period of the movie and the time when the film was made, Navarre makes a lot of the decisions for the two. I understand that within the context of the film, but I was particularly struck by a major decision Navarre makes on Isabeau’s behalf near the end of the tale which I thought ignored her autonomy distressingly. I can’t give more details without being “spoilery,” but if anyone has seen the movie and wants to discuss it further in the comments, let me know.

Even with these flaws, I will always find Ladyhawke a very entertaining and epic tale. Watching a movie like this which is so steeped in romance, fairy tale, and compelling drama, I can’t understand why there aren’t more fantasy movies based on original stories out there. If you feel starved for this type of entertainment like me, I urge you to give Ladyhawke a try.  I can guarantee that like Philippe, you too will become lost in the saga of Isabeau and Navarre.

435shares
We use cookies to ensure that we give you the best experience on our website. If you continue to use this site we will assume that you are happy with it.OkNoPrivacy policy