Bathsheba contemplates the face she shows to the world.

Gentle readers let me know if you are guilty of this: Have you ever watched a romantic comedy where the gorgeous heroine finds herself having to choose between two gorgeous eligible bachelors? As they compete to charm her, and she frets over the arduous choice she has to make, do you find yourself rolling your eyes just a bit? Choosing between two perfect men is not a problem you think. It’s the opposite of a problem. At first glance, you might think that Far From The Madding Crowd, a movie based on Thomas Hardy’s Victorian novel, is a story about a woman caught in this sort of artificial dilemma, but once you’re drawn into the tale, you’ll probably be deeply moved by the tragic and real struggle aspect when unrequited love, frustrated yearning and passion is rampant.

The 1967 movie version of Far From the Madding Crowd closely follows Hardy’s story. The movie portrays several emotional years in the life of one of Thomas Hardy’s heroines, Bathsheba Everdene (Julie Christie), a beautiful, intelligent, headstrong young woman who inspires love in not two but three men. At the beginning of the story, Bathsheba is living cheerfully penniless with her aunt in the fictional region of Wessex in the English countryside. She draws the attention of Gabriel Oak played by Alan Bates, a sheep farmer coming up in the world. Once he knows Bathsheba is not being wooed by anyone, he asks her to marry him, noting that his only advantage is getting a word in before other possible lovers as he knows he is “only an everyday sort of man.” Bathsheba turns him down in a way that doesn’t quite hide her amusement.

She then abruptly leaves the neighborhood, and Gabriel doesn’t know where she has gone. He falls on hard times because of a terrible tragedy, and he loses his farm. He has to give up his dreams of owning his own farm and hire himself out, working for other people, going several steps back in his life plans. He leaves his home to find work. While his fortunes have diminished, Bathsheba’s have gone well. She has inherited her uncle’s prosperous farm. By chance, in his search for work, Gabriel finds himself on his former love’s farm (Thomas Hardy loves coincidences) and she hires him. 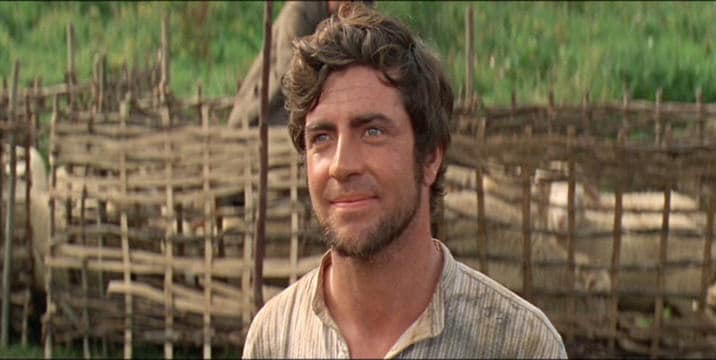 Bathsheba decides that she will manage her farm herself instead of hiring a bailiff who would normally do the job. Her unusual decision draws the attention and whispers of the neighborhood, but she sets herself to the task with admirable confidence and daring and does her job with success. After some capricious acts of hers, Bathsheba draws the attention of her neighbor, gentleman farmer Mr. Boldwood. He is a man famed for his indifference to women, but when he begins to really pay attention to Bathsheba, powerful feelings awaken in him that changes his life forever.

Bathsheba’s third lover is dashing soldier Sergeant Troy (Terence Stamp) who she meets while walking around on her own at night making sure her farm is secured. He is handsome, magnetic and unpredictable and known for his romantic exploits in the area. He is struck by Bathsheba’s beauty at first sight and begins to fascinate her almost at once. 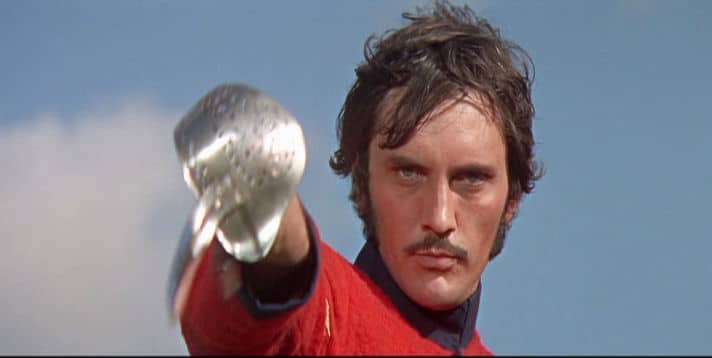 The movie intriguingly explores Bathsheba’s romantic relationships. Each of them loves her in very different ways and her relationship with each affects her life in dramatic, unexpected turns. The performances are all well done. As Bathsheba, Julie Christie is fiery and often fierce, playing a formidable yet vulnerable woman, often showing a strength and independence which might even seem astonishing for a more modern character.

As Gabriel Oak, Alan Bates is just as he should be, steady, strong, reliable, a credit to the tree which is his namesake. 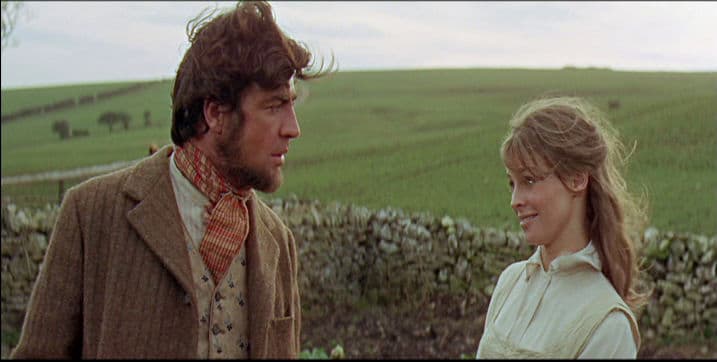 He looks quite at home on a farm whether he is dipping sheep, saving Bathsheba’s straw ricks from being burned to the ground or simply walking the fields seeing to her interests. It’s easy to see why he earned a Golden Globe nomination for his performance though I can’t quite fathom why Bathsheba doesn’t fall into his arms early on. With Bathsheba, we learn more and more to appreciate the qualities of this unassuming man who is often a calm influence in the midst of disorder.

Terrence Stamp plays the intense, charismatic yet manipulative Sergeant Troy well. It is easy to see how someone attracted to him could be pulled into his captivating web even while those on the outside might be suspicious or feel like warning a susceptible young woman away from him.

As Boldwood, Peter Finch does a wonderful job of portraying a man who can be vulnerable and emotionally fragile in ways which are almost painful to watch while at the same time harboring an almost frightening intensity within.

While this film is undoubtedly a romance, it doesn’t shy away from the painful, heartbreaking side of romantic relationships. The word “madding” in the title means “frenzied.” It suggests that the events of the story take place far from the chaos and heated passion of London, but Hardy deliberately shows that just because we are in the supposedly peaceful countryside, the residents are susceptible to as much emotional turmoil as anywhere else. At one point Bathsheba cries “Why is loving such a misery,” and considering the troubles the men pursuing her bring into her life, we can’t really disagree with her. There is as much sorrow as joy in this film though it is not necessarily enough to depress you. You get caught up in the story, and the ending is satisfying though I always feel a bit disappointed because it is not as romantic as I could have wished.

While the drama, passion and tragedy of this movie play out before your eyes, you can’t miss the beauty of the English countryside in many beautiful scenes. Troy shows off his prowess with his sword to Bathsheba among impossibly wide hollows and hills. Farmer Boldwood expresses his feelings to her in a rich, beautifully lit glade under some trees. Gabriel talks with his lady love as she rides by on her horse with the sun behind her in a green field of flowers and sheep. We see the progress of farm life over the year as the workers shear sheep, take care of growing lambs, sow corn and bring in the harvest. Like the lives of the characters, though, sorrow and distress can lurk in this idyllic setting. There are some troubling and even haunting scenes, typical of farm life no doubt, but they can be difficult to watch nonetheless. Far From the Madding Crowd is not rated, but if you are very sensitive to seeing animals or even children in distress, you might want to be wary of scenes like this though they are not pervasive. 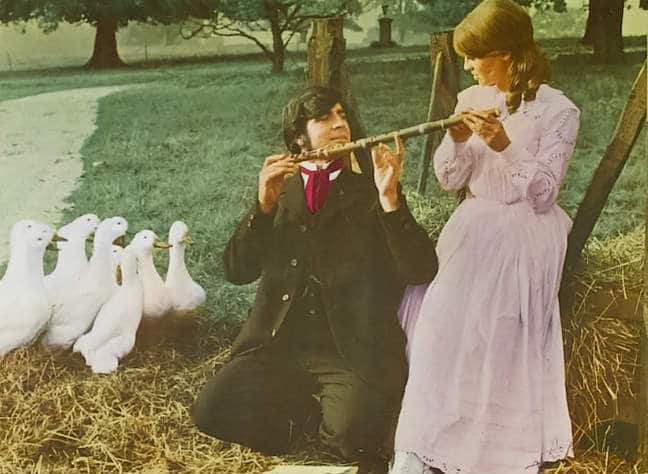 Gabriel and Bathsheba – Far From the Madding Crowd

I haven’t seen the other versions of this movie, but popular opinion suggests that this is one of the best ones, and I can see why. It brings Hardy’s book richly and captivatingly to life with exceptional portrayals of the characters in a world which seem to transport you right into the complex, imperfect lives of the people of this country. Even “far from the madding crowd,” people are just as difficult and wild and human as they are anywhere else.

Have you seen this adaptation of Far From the Madding Crowd? What are your thoughts on this classic film?