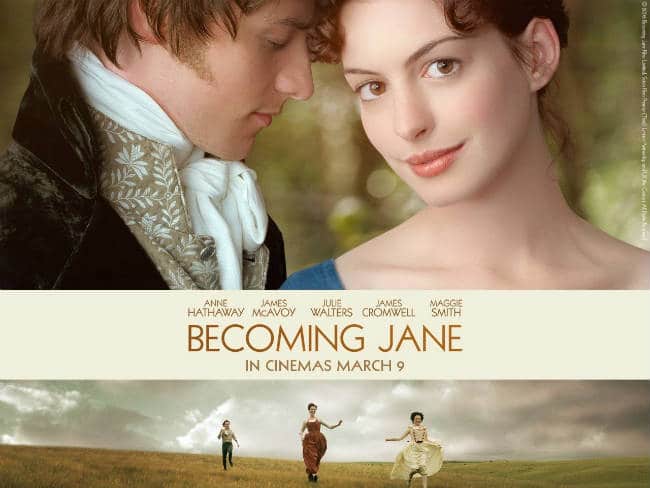 Becoming Jane is one of those movies I fell in love in the first few minutes with. Besides being a huge fan of Jane Austen’s novels, I happen to love period dramas as well as historical biographies and old-fashioned romances. Becoming Jane fits into all of those genres and then some. The script is full of wit, clever references to Austen’s own stories (most notably Pride and Prejudice) and a forbidden romance so captivating and incredibly romantic that at times you may find yourself with actual butterflies in your stomach. No doubt the latter due to the swoon-worthy and impassioned performance from James McAvoy as Jane Austen’s love, Tom Lefroy.

RELATED Music Video Vault: Tom and Jane – Once Upon a December 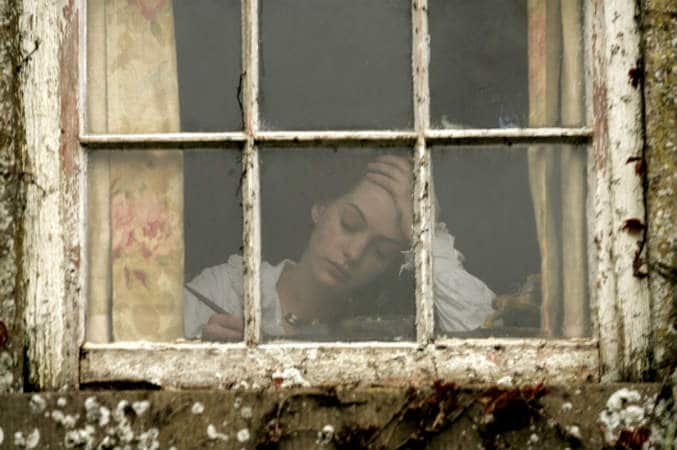 The film takes inspiration from the well-researched book Becoming Jane Austen by Jon Spence, a persuasive and unique look at Jane Austen’s possible romance with Tom Lefroy – a relationship that was speculated about even amongst their own relatives and friends. The filmmakers don’t exactly follow the book to the letter but rather use Spence’s research as a muse to create their own speculative work in a way fitting to Austen’s own storytelling techniques (despite the fact that we all know going into the film that Jane and Tom are not destined to have a happy ending like all of her heroes and heroines).

Becoming Jane is about a young Jane Austen (Anne Hathaway) and her “secret” romance with the young Irishman, Tom Lefroy and how their love story may have been the main influence for all of her romantic novels. Following that line, Jane takes a rather strong dislike to Tom Lefroy at first because she overhears him insulting her writing. The nerve! Still, the two begin to come together due to a meeting of the minds. They can match each other in wit, conversation, and passion.

However, society is against them. He needs to marry someone with money as does Jane. If together, they would have to live in poverty. Not to mention her writing career would be difficult to maintain. Plus, Tom would have no way to support his very large and impoverished family who rely on his allowance from his wealthy uncle.

From history, we all know Jane Austen never married and died at a relatively young age. Becoming Jane, however, is not about the end but rather the journey. Not all great love stories end in a happily ever after. Some end because there is no other way. Still, the film plays the romance to an epic degree despite any imperfections the film may have.

One of the greatest scenes in Becoming Jane is the perfectly choreographed dance sequence between Jane Austen and Tom Lefroy in the middle of the film. From the dance, the music, the actors’ expressions, to the camerawork, the scene is absolutely wonderful.

Jane enters the ball, rather forlorn as she considers the prospect of marrying Mr. Wisley (Laurence Fox), a young man with whom she feels no true affection. She dances with Mr. Wisley, passionless with arms drooping and a defeated expression (her eyes dull in appearance). Her heart already belongs to Mr. Lefroy with whom she knows she cannot be with. Nor does she expect anything from. In fact, at this point in the film, Jane is not exactly sure of Tom’s feelings.

But as she dances, a swell of music occurs and Tom Lefroy enters the scene. (I remember seeing this in theaters and the scene was so effective, a large portion of the audience gasped when he appeared.)

This particular dance has you switch partners and Lefroy timed it so that he would be able to dance with Jane. It’s the perfect rescue. Not on a horse from a villain. But from her own loneliness and confusion. Through the dance, they make their feelings known to each other without saying anything. Jane’s expression turns from one of defeat to joy and passion. Her dance movements become lively and invigorated. 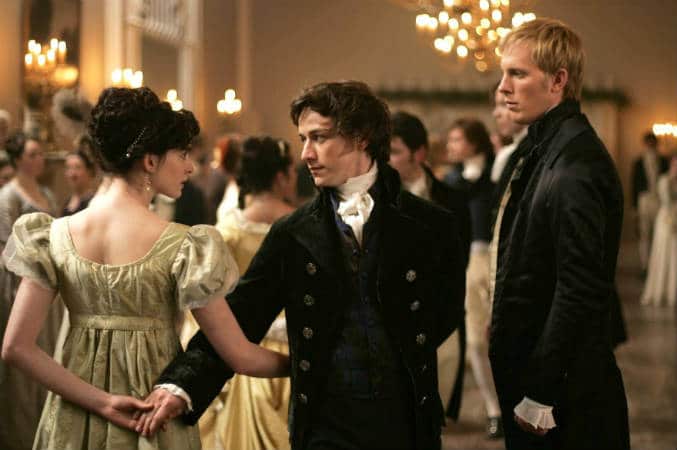 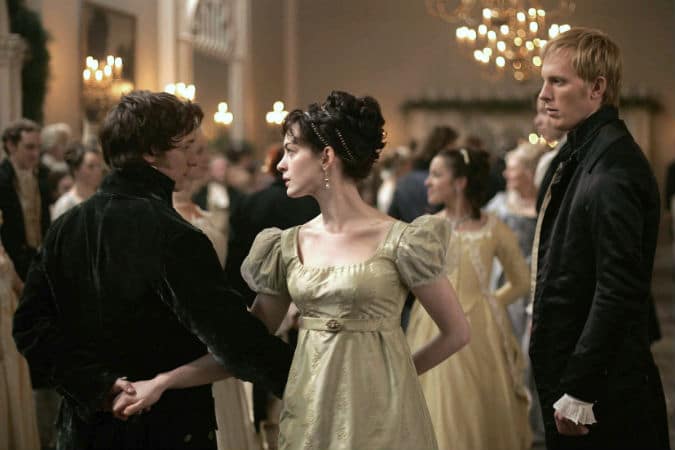 The two stare into each other’s eyes in a way that rivals Mr. Darcy and Elizabeth.

This scene is a brilliant piece of cinema and a perfect case study on how to do romantic period dramas right. If you haven’t seen the film, it’s worth watching for this incredibly authentic and romantic moment.

Besides the intense and captivating romance between Lefroy and Austen, the other characters are also well-written and memorable, particularly Anna Maxwell Martin as Jane’s sister Cassandra and Julie Walters as Jane’s mother (who isn’t especially thrilled with Jane’s writing ambition). Some of the characters are based on real people (such as Jane’s family) while others are fictional characters, representative of the social issues that may have influenced Jane to write her stories.

There’s a very entertaining performance, for instance, from the always witty Maggie Smith as Lady Gresham (a character no doubt influenced by Lady Catherine de Bourgh), who plays a role similar to that of Violet Crawley in Downton Abbey.

In many ways, Becoming Jane is more historical fiction than actual fact – even though there are still many truths about Austen’s life presented. Still, if you love period drama, and can look at this as being separate from historical truth, this is one of the best in the genre. James McAvoy as Tom Lefroy gives a performance up there with Colin Firth as Mr. Darcy and Richard Armitage as Mr. Thornton.

Sure, if I wanted to be critical, I would say that the film is likely historically inaccurate and pure speculation at best. Not to mention that Anne Hathaway’s accent is not what you would call authentic. Yet, somehow I found I didn’t really mind. The film plays out like a “what if” and is compelling as a work of cinema rather than an accurate historical biography. As a period romance, Becoming Jane is a masterpiece. Besides that, Hathaway’s accent – while imperfect – is so slight it is not very distracting. Her passion for the role and chemistry with the other actors more than makes up for this.

McAvoy and Hathaway light up the screen together with a chemistry so palpable you can feel it, which really helps sell the overall effectiveness of the film.

On top of the beautifully crafted script, strong direction, and memorable performances, the set design is gorgeous, the cinematography fantastic and the costumes accurate and eye-catching.

In all, Becoming Jane may irritate purists who only want complete historical accuracy. And then some may dislike that an American was cast as Austen. Not to mention, the tragedy of the story may not appeal to anyone who only wants happy endings. But if you can get past all of that, what’s left is a fantastic romantic period drama that stands on its own as a gorgeous romance worthy of Austen herself. Becoming Jane is one of my favorite films of all time and I can watch it again and again.

Are you a fan of Becoming Jane? Let me know your thoughts on the film below.