There’s something spooky, and frankly, unsettling about a mystery that begins as one thing, only to twist itself into something entirely different as it progresses. And Then There Were None is one such mystery. Its mastery skill might astonish some viewers, especially those (like myself) who are used to a very different kind of mystery story from Agatha Christie.

In the not so distant past, Vera Claythorne (Maeve Dermody) had a promising future ahead of her. But following the death of a young boy in her charge, she’s living as a shell of her former self. It’s this that leads her to an interview for a personal secretary job. The mysterious posting would give employ to Vera by a wealthy couple whose methods seem eccentric at best. Though she never has direct contact with her employers, Vera accepts the position through a third party. Haunted by the past, Vera’s memories rise to the surface when she learns she’s expected to work at a remote house on the Devon coast on an island surrounded by water.

Also joining Vera in And Then There Were None is a party of nine other strangers all arriving at the Devon coast estate simultaneously, brought together by the same mysterious couple. Among them is the illustrious Judge Wargrave (Charles Dance) whose career has been heralded but not without scandal; the skeptical Dr. Edward Armstrong (Toby Stephens) solicited for his profession; a man trying to forget his own failures; Det. William Blore (Burn Gorman) who is beckoned to the island by way of employing his skills; and the fifth guest is mercenary Philip Lombard (Aidan Turner), the only one among them who seems proud of his checkered past. Ten strangers on an island, with no sight or appearance of their absent hosts, none of whom seem to have anything in common save for one thing: murder. 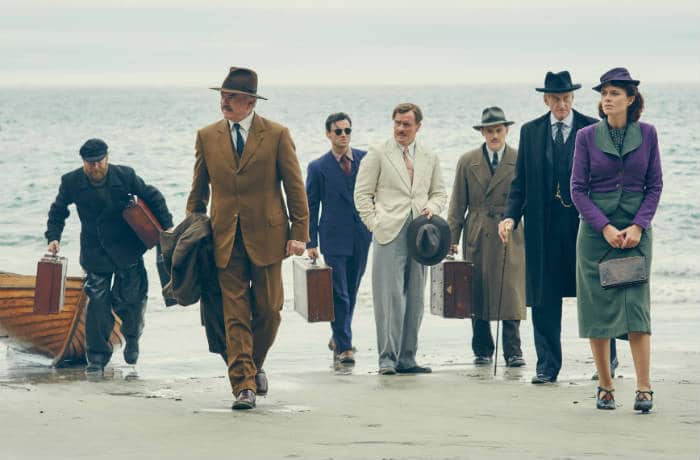 This is a mere sampling of the shenanigans that such a large group of characters get up to. Not only that, there are countless other familiar faces appearing. Aside from the familiar names listed above, this ensemble also boasts Douglas Booth (Romeo and Juliet, Great Expectations), Anna Maxwell-Martin (Death Comes to Pemberley, Bleak House), Sam Neill and Miranda Richardson. The mere fact that the producers pulled together such a talented group of performers (especially considering some of them don’t make it past the first act!) is impressive. To say this cast is impressive is underscoring their talent not to mention underappreciating the gifted acting in the space of one production.

If the cast weren’t tempting enough, the script and setting should be. The talented Sarah Phelps (who has some Dickens production credits to her name as well as being the creator of ITV’s magnificent The Crimson Field) adapted this for the screen. In the making of feature, Sarah reveals that she and the filmmakers discussed changing this to a modern piece but ultimately decided to keep it true to its original source. The next challenge was how to make it fresh. They succeeded in my book. I’ve not seen the ’40s era film of the same name, but this production is absolutely smashing. Despite being shocked by how “brutal” the story is, Sarah crafted one of the eeriest mysteries to come along in a long time let alone bearing the name of Agatha Christie. Aside from these attributes, the set (which involved a lot of trickery and came out on screen beautifully) and costuming cannot be forgotten. As is the usual, it’s up to prime BBC standards and the results are impeccable. 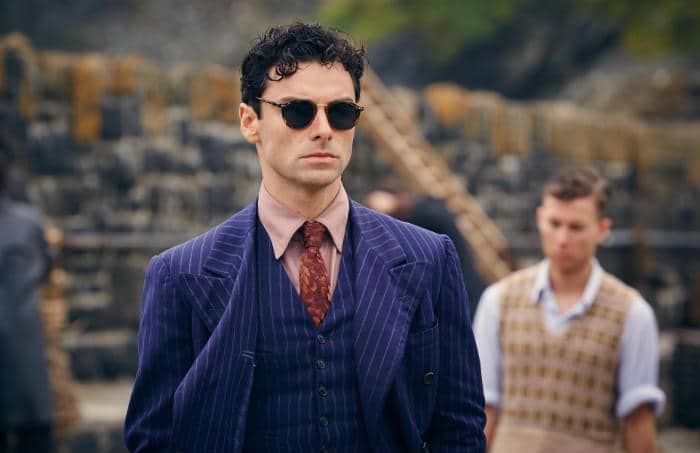 For those curious, it might be interesting to know this TV series is the follow-up production with BBC as the new home for Agatha Christie (the first being Partners in Crime). Previously, the Christie rights were held by ITV. Though with BBC taking over, some changes have been made if And Then There Were None was any indication. To say this is Christie’s darkest mystery adaptation yet is an understatement. It’s deliciously creepy and twists initial impressions into something far more sinister leaving the audience with surprising conclusions. Don’t assume you know what’s around the corner because chances are you’ll be surprised by what comes next.

Content Note: There are two clothed sex scenes in the third episode (easily fast-forwarded as we can anticipate them coming), the latter of which is more “aggressive.” While very few of the actual murders are seen (they happen off-screen), the aftermath of some are semi-graphic including two being brutally stabbed (lying in pools of blood), another is shot multiple times and two commit their own murder (one by a shot through the brain). There are also several instances of strong language throughout the latter two episodes, including 8-12 F-words.

And Then There Were None will air Sunday, March 13th, and Monday, March 14th on Lifetime in the U.S. You can preorder the DVD or Blu-ray on AcornOnline.com.

Looking for more of Christie’s mysteries? Read our list of Ten Favorite Episodes of Agatha Christie’s Marple. Or discover other mysteries in The 39 Steps or the recent 50s era mystery series, Grantchester.