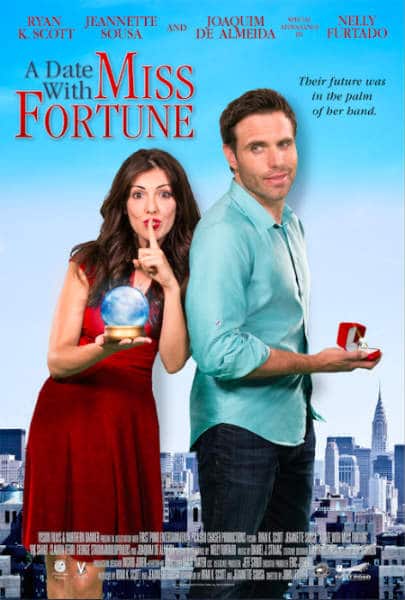 A DATE WITH MISS FORTUNE REVIEW

A Date with Miss Fortune is a heartfelt romantic comedy starring (and also written and produced by) real life married couple Ryan K. Scott and Jeannette Sousa as Jack and Maria, two people who fall in love after a fateful encounter. Based on the actors’ real-life relationship, this cross-cultural love story feels more realistic than your typical Hollywood romantic comedy. With an engaging story, great chemistry between the leads, and a wonderful cast, this indie romance should be on the Watchlist for romantic comedy lovers everywhere.

The film starts with a memorable “meet cute” in a diner. Jack’s ex-wife is there with her new husband and he doesn’t want to be seen as alone and struggling. He’s a sitcom writer in-between jobs. So he sits down at Maria’s booth (a total stranger to him at this point) and asks if she’ll pretend to be his girlfriend.  At first, Maria thinks Jack is making it up and that this is a pickup line. Much to Maria’s surprise, Jack’s ex then walks over with her new husband and flaunts her very large wedding ring in front of Jack. Maria then decides to come to Jack’s rescue. She pretends to be his fiancé (she had just broken up with her own fiancé and still had the ring) and flaunts an even bigger ring. To say the least, it’s an adorable first meeting.

In a mostly successful fashion, the rest of the film then switches back and forth between this accidental first date and their future together. Admittedly, the first couple flash forwards are a little bit jarring and confusing, but the non-linear approach to the story does ultimately work. As the film continues, the kinks smooth out, and by the end, the story arcs tie nicely together with a lovely nostalgic bow.

With an engaging story, great chemistry between the leads, and a wonderful cast, this indie romance should be on the Watchlist for romantic comedy lovers everywhere.

Besides the charming story, the filmmakers cast a very talented group of actors playing believable characters. In fact, there’s an obvious affection for each and every character in the writing which shines through on the screen. The leads, of course, do a wonderful job, perfectly encompassing their roles. I was especially impressed by Jeannette Sousa (Meet the Browns) who has a likable quality onscreen with a lot of potential to play larger roles in bigger productions. The supporting players include some familiar faces (including Nelly Furtado) with a lot of talent as well. Most notably Joaquim de Almeida as Maria’s intimidating father, a wonderful actor who will no doubt look familiar due to his numerous movie and TV roles.

While not all of the comedy pans out, there are some very funny sequences and even a few dramatic ones that play on the heartstrings. My favorite scene of the entire film was a wonderfully scripted and acted moment between Maria and her mother when they discuss love, life, and even fate. The film is worth watching simply for this scene.

Overall, A Date with Miss Fortune is an entertaining and genuine romantic comedy. While an imperfect production, it is still an enjoyable way to spend an evening. Fans of My Big Fat Greek Wedding and other similar romantic comedies should enjoy the film. A Date with Miss Fortune was released for Valentine’s Day and is now available on DVD and VOD. The film is rated PG-13.