Vintage Review: The Last of the Mohicans – A Moving Historical Drama 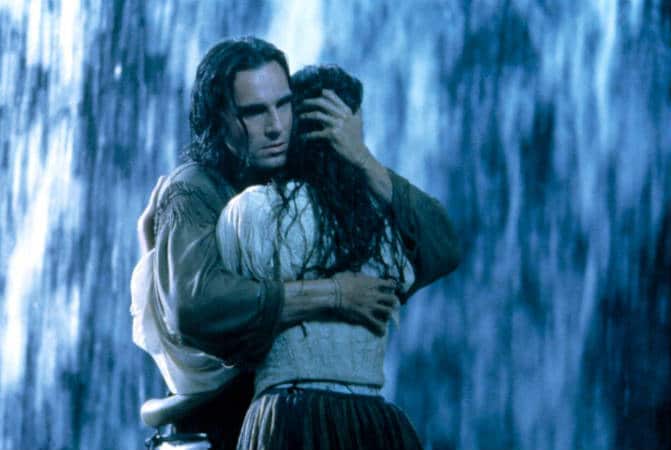 Cora and Nathaniel (Hawkeye) in The Last of the Mohicans

The Last of the Mohicans Review

The story follows three trappers who become caught up in the French and Indian War. They are Chingachgook, a Mohican, his son by blood Uncas and his ‘white son’ Hawkeye. When a french-allied Huron warrior named Magua attempts to murder two English ladies in the name of revenge, the three men come to the rescue. They choose to protect the Munroe sisters and escort them safely to their father, a General stationed at Fort William Henry. However, when they arrive at the fort they find it under siege from the French. The group must attempt to find a way to safety in the midst of war-torn countryside with Magua and his personal vendetta never far behind.

The party come upon a murdered family of settlers.

The Last of the Mohicans is an epic cinematic masterpiece. It is not a straight adaptation of the book with the director, Michael Mann, instead choosing to capture the essence of the novel. Large changes were made such as altering love interests and being less patronizing about the Native American Indian characters. In fact, Russell Means (Chingachgook) was approached about the role due to him being an activist for Native American rights and also the first National Director of the American Indian Movement. In interviews, he has praised the film as being a step forward in the portrayal of Native American Indian characters, especially concerning Magua who is a three-dimensional villain with a good reason for his rage. The portrayal of Native Americans in this film is done with sensitivity and depth. That said, I would have preferred if the character Hawkeye/Nathaniel had not been treated as the main character in a film titled The Last of the Mohicans.

Magua presents the captured English women before the Sachem for judgment

Nevertheless, it is a beautiful, atmospheric piece of cinema that has managed to age rather well in just over twenty years. This is down to several things; the characters, locations and music being most prominent. The score was developed by Trevor Jones and Randy Edelman. It is the kind of large, emotional, important soundtrack that you rarely hear outside of big budget historical drama, the kind that makes an already good movie something truly special. The pace and tone of each scene are always perfectly matched, bringing the film truly to life. It also includes a track by Clannad called ‘I will find you’ which brings their own blend of mystical earthiness to the mix.

Michael Mann some utterly beautiful locations to film Last of the Mohicans though two stand out the most. Interestingly, the waterfall cave scene was actually filmed in a cave behind a real waterfall, making the recording of sound extremely challenging. The most memorable scene, however, is the promontory sequence which was filmed in Chimney Rock Park, an attraction in North Carolina.

Everyone acted their parts well but special mention must go to Wes Studi as Magua who played him as a complex man at once hateful while remaining sympathetic. Despite having few lines, Russell Means, Eric Schweig, and Jodhi May managed to fully realize their characters and communicate a great depth of feeling in their roles. Madeline Stowe and Daniel Day Lewis were also very good.

There are two love stories that develop over the course of the film. The main one is between Cora and Hawkeye. It is a familiar attraction between like-minded passionate souls. The second is between Uncas and Alice, the younger quieter sister. This subtly progresses in the background through short blink-and-you’ll-miss-them moments. In fact, much was cut out of the original script. Despite its brevity, I still find this love story much more compelling than the central one. Here’s hoping those deleted scenes are released eventually.

All in all, the film has many things; love, action, drama, history and a well-written fast-paced plot. As the title may indicate there are tragic aspects to the film. It is not a happy film but it is an important one.  I can definitely recommend it if you haven’t seen it yet. The Last of the Mohicans is a classic and a moving historical drama which will not fail to engage you.

Content Note: This movie is rated R for some bloody battle scenes.

63shares
We use cookies to ensure that we give you the best experience on our website. If you continue to use this site we will assume that you are happy with it.OkNoPrivacy policy