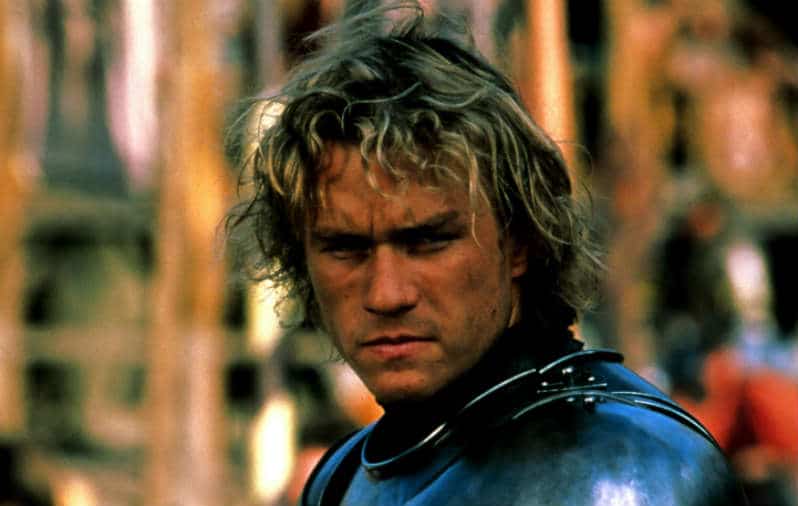 When done well, period films immersed in a contemporary essence can be its own brand of cinematic magic. Films that (for me) fall into this stereotype would be the comedic Austenland or the darling fairy tale Ella Enchanted. Another of those films is the subject of today’s review, A Knight’s Tale. Meant to be a medieval period drama, this entertaining ride of a period drama is more comedy piece than anything, and still, it has its moments of shining poignancy that counterbalance it all.

Changing his stars has always been something Will Thatcher (played by the late, great Heath Ledger) has wished to achieve. This is why Mr. Thatcher sent Will traveling as a servant with a noble knight so that Will might have a better life than he. Years later, Will’s master dies during a jousting tournament. Not wanting to lose the prize money, Will dons his master’s armor and competes in the final round.

Walking away with a win, Will suddenly realizes that he, along with his friends Roland and Wat (Mark Addy, Alan Tudyk), could make a living out of jousting. Thus, he takes on the identity of Sir Ulrich von Lichtenstein, and with some training, Will makes preparations to enter the next championship. Along the way, the trio adds to their numbers with poet Geoffrey Chaucer (Paul Bettany) and meets up with Kate (Laura Fraser), a female blacksmith.

For a while, Will’s plan goes exactly as he envisioned it, and the stars seem to align. But then he meets the beautiful Lady Jocelyn (Shannyn Sossamon) and ignites a rivalry with a knight of noble birth, Count Adhemar of Anjou (Rufus Sewell). 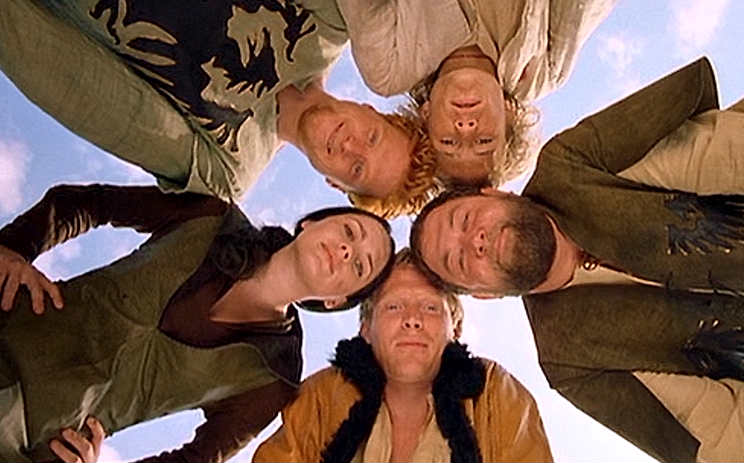 You know when the opening credits play to a rollicking version of “We Will Rock You,” this isn’t going to be the average kind of medieval film. In fact, you may even wonder if, from the DVD cover or synopsis of A Knight’s Tale, you’ve put the right disc in. This type of filmmaking is an acquired liking and as with everything else, it won’t be to all viewers’ enjoyment. For my two cents, this is exactly the kind of film that a night in watching fluff is all about. Over the years, I’ve seen A Knight’s Tale several times, but until recently, it had been a long time since I watched it. As it played again, I realized that most of the film is slapstick more often than not. Everything we visually see contradicts the idea of the story we have affixed in our minds.

From the painfully obviously contemporary costume design to the dancing and depiction of independent women, the only thing “middle ages” about this film is the chain metal and lances. Or that’s how it sometimes seems. In no way is this a criticism. It’s quite the opposite in fact. It’s the eccentricities of this film that make it stand out. 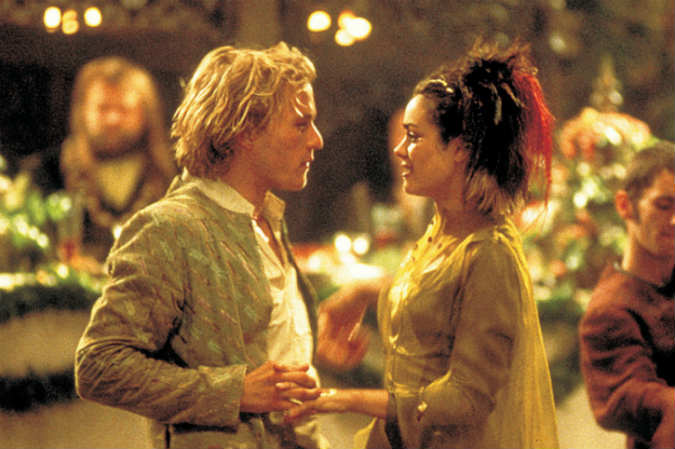 Tucked amidst the humor are some hard-hitting lessons about the important value of loyalty and all it means as well as honor. These are all prominent concepts that feature well against the funny script, and of course, Heath Ledger leads the rest of the film with a superb performance. The rest of the cast ensures the film is a good time (the chemistry between everyone is off the charts good) and the five members of Will’s team is a very memorable ensemble cast. The romance is also pretty decent in this. Not up to par with other films of this time period, but it’s definitely present with a real sense of romantic sparks that works nicely in this story.

When all is said and done, those looking for a good laugh without graduating to a contemporary setting might find a new treasure inside A Knight’s Tale. It’s one I found a new appreciation for and discovered again just what a fabulous tale it is – all while it jousts its way towards its own sense of good old-fashioned entertainment. A Knight’s Tale is available and reasonably priced on DVD and to rent or own on Amazon Video.

Have you seen A Knight’s Tale? What’s your favorite thing about this film? Sound off below.

Content: if you’re bothered by nudity, there are two comedic instances of the male backside, and side nudity present. A Knight’s Tale is rated PG13.

114shares
We use cookies to ensure that we give you the best experience on our website. If you continue to use this site we will assume that you are happy with it.OkNoPrivacy policy