THE SHOW: Mercy Street
WHERE: PBS
WHEN: Sundays

In recent years, Masterpiece Theatre productions have typically taken place in the 1900s with a particular fascination with WWII and its many-faceted complications and great depth of sorrows. This is why on the eve of ITV’s phenomenal Downton Abbey playing its swan song, PBS introduces us to our new addiction with a new time period. Inspired by the stoic lives of the volunteer nurses and doctors of the Civil War, this is Mercy Street.

Nursing has given Miss Mary Phinney (Mary Elizabeth Winstead) a new purpose in life. Mary lovingly cared for her ailing husband (a German Baron) until his death. Now with the country divided in a Civil War, Mary has put her self-taught nursing experiences to good use. In pursuit of helping her fellow Union confederates, she volunteers as a nurse.

Elsewhere, watching everything she has known be whisked away, Emma Green (Hannah James) has to adjust to a new way of life. Her family’s hotel has been conscripted to the Union cause, leaving her family to either leave or stay in a Southern city taken by the North. Every day, Emma brushes shoulders with the opposite side of the fight, holding out hope her beau will return safely. As she searches for him in the small group of Confederate patients housed in the hospital, Emma finds herself doing well as a voice for the injured men.

These two women find ways to work together as they make a difference. Meanwhile, the lives of the doctors including Dr. Jed Foster (Josh Radnor), a modern thinker, and Chaplin Henry Hopkins (Luke Macfarlane) intersect with those of these two women. 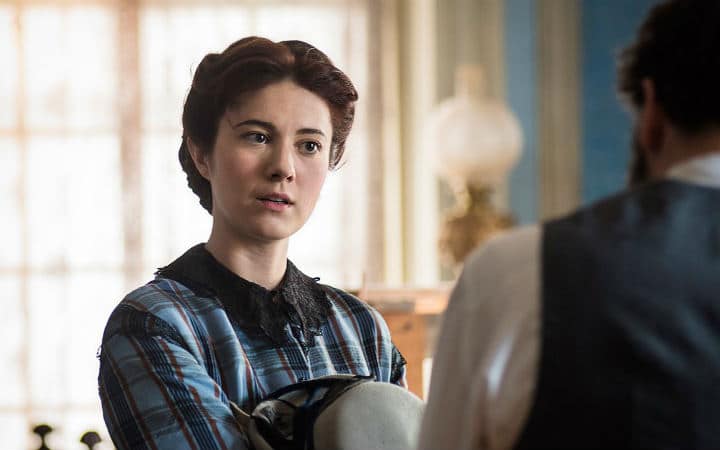 Watching this pilot is something of a “rude awakening.” Being accustomed to the sophistication as glimpsed in the age of jazz or the bittersweet hope of those living in WWII, a Civil War drama presents something different. The drastic change in setting and location keeps things interesting without sacrificing the soapy goodness we so love about this genre.

This pilot was both exactly as I pictured and completely different than what I anticipated. The tone of the drama isn’t as dark as the period ordinarily demands. Plus, the production itself needs some ironing out before it can be declared a masterpiece. The pilot was too frenzied and lacked a bit of the polish period films seem to wear like a shining star, yet that doesn’t mean there isn’t plenty of potential waiting in the wings. Indeed, it’s quite the opposite. I’m torn on my overall opinion of the pilot because the audience is immediately thrust into chaos (there’s no gentle nudge into Mary’s world; we are rapidly hit with everything at the precise time she is) makes the introductions and explanations harried. Given this is the pace at which Mary’s world changes, I sort of admire this style of filmmaking because it forces us to, in some sense, walk alongside our Northern heroine.

However, none of my petty complaints can detract from my opinion that Mercy Street is going to be and in many instances, already is, spectacular. It has a respected Hollywood name (Ridley Scott) serving as producer and includes beautiful costume designs. Plus, it’s nice seeing a period that has been absent from PBS’ Masterpiece for a long time, perhaps even dating back to their string of Austen remakes, after which “bonnet” period pieces became extinct. Or rare at best.

As I watched Mercy Street, I was taken aback at how “light” this series was. There are moments of drab sorrow that do slip into the script such as the death of a young teen clutching a lifeline to his father or the harsh realities of which brave men get the better care. Still, something about the scripting and direction has a lighter feel that I didn’t anticipate when considering the era and network. That being said, I rather appreciate the fact that there is a compromise in the tone without coming across as being a poor production choice.

Starting out, the romance is reduced to nothing, though Emma is desperately searching for her beau and there are some flickers of sparks between other characters as well. Whether or not this will grow into anything, I don’t know. Perhaps, for now, all of the characters will throw themselves into bettering the lives of their patients. Either way, I think I’m going to enjoy these characters. They’re going to have complexities that extend beyond the hints we are showered with, and in particular, the two things I’m curious about will be the mystery (or lack thereof?) regarding Mary’s husband, and the potential, tenuous friendship that might be drawn between Mary and Emma. The cast is brilliant and of course, the costumes are stunners!

Mercy Street is being pushed as a replacement for Downton Abbey, which isn’t a fair comparison considering their vast differences, both in location and era. Still, if you’re ready for a new Sunday night Masterpiece fix, catch Mercy Street. It’s a beautiful start to what I hope, will be a new period drama fixture.

Comment down below with your early impressions. I’d enjoy reading them.

Romance Rating
(with hope and room for further development)

Our romance-themed entertainment site is on a mission to help you find the best period dramas, romance movies, TV shows, and books. Other topics include Jane Austen, Classic Hollywood, TV Couples, Fairy Tales, Romantic Living, Romanticism, and more. We’re damsels not in distress fighting for the all-new optimistic Romantic Revolution. Join us and subscribe. For more information, see our About, Old-Fashioned Romance 101, Modern Romanticism 101, and Romantic Living 101.
Pin this article to read later! And make sure to follow us on Pinterest.
By Rissi JC on January 20th, 2016