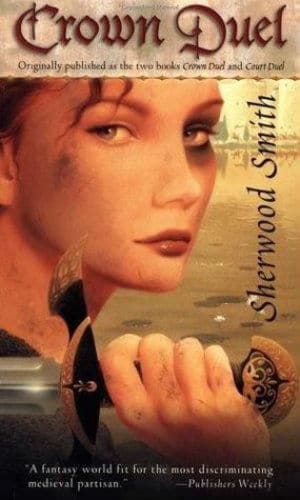 Crown Duel was originally published as two novels, Crown Duel and Court Duel, but has been re-released in recent years as one volume.

Meliara Astiar of Tlanth — Mel —  is not what anyone expects when they think of the title countess. She and her brother, Branaric — Bran — have been raised far away from Court life by their widower father.

Mel has spent her entire life running wild with the village children, growing up with freedom that comes from an absent father.

Mel has spent her entire life running wild with the village children, growing up with freedom that comes from an absent father.

But the life that has been on the edges of Meliara’s world for so long is galloping towards her and her brother with alarming speed. The ruler of the kingdom of Remalna, Galdran Merindar, has broken a Covenant that threatens the livelihood of the people of the realm. His greed to overtake the wood that makes up the forests where the Hill Folk live and steal the Fire Sticks that the populace uses for light and warmth will trigger a war.

On his death bed, Mel and Bran’s father has them agree that they will lead the people in a revolution against Galdran in order to keep the Covenant. But Mel and Bran are ill-equipped to lead an army, full of people even less equipped than they are to fight. Mel and Bran agree to their father that they will do all they can to stop Galdran. They begin the revolution with the resources that they can, but it is clear that Galdran’s troops outnumber them. Using ingenuity and whatever element of surprise they have, Mel leads her people against Galdran’s vast army into bouts of confusion.

As the weeks pass and Mel’s people lose their ground against the army, Mel takes a desperate measure to break into the enemy’s camp, to see what they’re up against.

Returning to her camp, Mel’s foot gets caught in a trap, that, ironically was not set by the enemy, but by her troops. Wounded and captured, Mel fights through to try and escape. Several failed attempts by Bran and their people only make things worse for Mel. The Marquis of Shevraeth has plans for Mel, to take her to the capital directly to Galdran, as he and the King had a wager going of who could capture her first. But Mel has other plans for escape, though as she and the Marquis travel to the capital, she realizes with her broken foot, the means for her escape are limited.

At the capital, Mel resolves to keep her pride, but is humiliated in front of the king and the entire Court. Imprisoned with absolute no means of breaking free, Mel has a visit from the Marquis, who seems to be an infinitely more complicated man than she realized. When the door to her cell is mysteriously unlocked, Mel escapes to the country, with plans to get back to Bran and her people. On the run, and exhausted, she is taken in by a family who nurse her back to health. But with the royal army on the hunt for her, Mel flees again, leading several people, including the Marquis, on a chase across the realm. As she continues to fight for her people, Mel knows her limits, and that her resourcefulness might run out.

Will Mel manage to take down Galdran in the way she originally envisioned?

Will Mel manage to take down Galdran in the way she originally envisioned? Will her people finally get out from under the reign of a tyrant?

In the second half of the novel, the stakes have changed, and though Mel didn’t know the rules of war, she knows the rules of Court even less so. As Mel maneuvers the glitz and glamor of courtiers and those vying for the crown, she must learn to make her own way, as she did when she was on the run. The Marquis, as mysterious as ever, could prove to know more than he reveals, but Mel finds it extremely difficult to trust him.  Others from the Court are just as untrustworthy, but Mel finds a handful of friends, including Bran’s fiancé, Nee, willing to show Mel the ins and outs of Court life.

Mel is a great protagonist, likable and relatable, and works as a funny narrator since she doesn’t try to hide her flaws, nor dumb down what is happening around her.

A letter sent to Mel from another Court member hints at dealings behind closed doors that could derail all that Mel has worked toward.

With the battles behind her, Mel’s life has taken a new turn that she must fight equally as hard for.

Crown Duel was one of my favorite novels as a teenager, and re-reading this novel as an adult, I was still impressed by how Sherwood Smith manages to make politics interesting in this fantasy world. The politics are not simple, but the writing is so articulate that it makes the politics engaging, even for readers who might not necessarily be attracted to heavy politics mixed with their fantasy. The two halves of the novel compliment each other, with war as the main focus in the first, and romance in the second. Mel is a great protagonist, likable and relatable, and works as a funny narrator since she doesn’t try to hide her flaws, nor dumb down what is happening around her. The other characters in the novel, including the Marquis, keep the reader guessing, making the novel a wonderful read. With a lush, well-crafted landscape, Smith’s world of Remalna is one that is a delight to return to time and time again.

Mel’s world in Crown Duel would look great on the big screen, with enough content for two films. A director such as Rupert Sanders (Snow White and the Huntsman) could give Remalna a dark edge, and give the characters life. Rose Leslie, most famously known for her role as Ygritte on Game of Thrones and Gwen on Downton Abbey, could bring the strength and resolve needed for Mel’s character. Ygritte and Mel share some of the same stubbornness! For Bran, I’d cast Brenton Thwaites (Jonas in The Giver, Prince Philip in Maleficent), who could bring a charming, but also a rough edge to the role. For the Marquis, Bill Skarsgård (Roman Godfrey on the TV show Hemlock Grove, and Matthew in the soon to be released third film of  the Divergent series, Allegiant) could give the character the mysteriousness that the character demands! Rounding out the cast as Nee, Adelaide Kane (Mary Stuart on the TV series Reign) would be a nice fit, as she definitely knows how to work a period piece, and command a room!