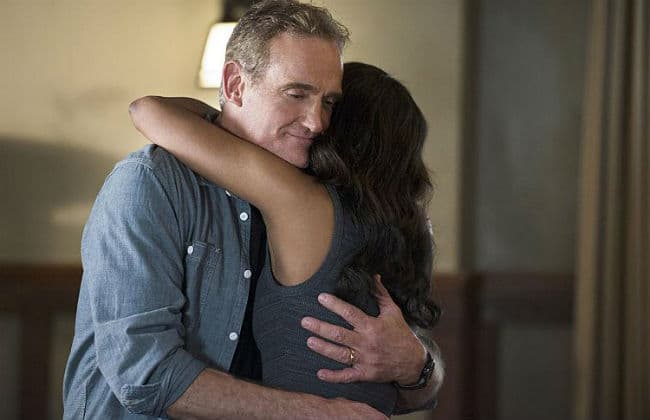 Tuesday night’s episode of The Flash, Gorilla Warfare, wasn’t impressive with its meta-human hunting (at least in my opinion since I’m not at all interested in Grodd who was the “big bag” of the night). But then that’s just me and maybe the majority likes the whole ape-running-lose craziness. However, in terms of character insights and additional depth, the episode was really quite good.

First we pick up where last week left off; Barry’s road to recovery. 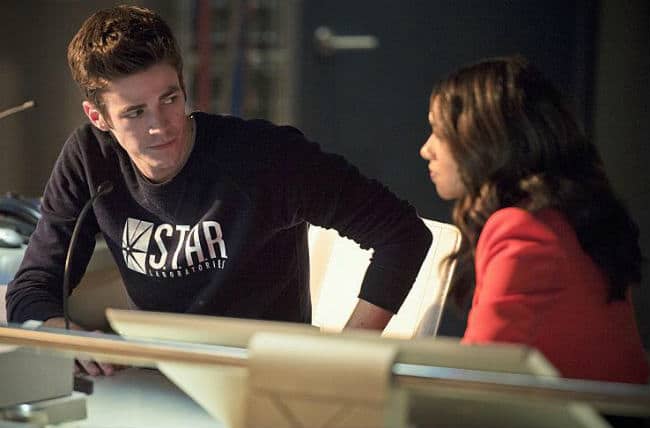 Following the attack on Central City’s peace and their champion, The Flash (all of which was sphere headed by Zoom), Barry Allen has more than emotional scars to heal from. Barry’s body is rapidly healing from his spinal injury according to Caitlin, but his mind is another story. Barry tries to take his mind off his defeat by continuing his training regimen, slowly building up his strength. But even as Joe and Iris try to get through to him, no one affects the shattered confidence doled out by Zoom. That is until Iris enlists the one person who can reach him: Henry Allen. 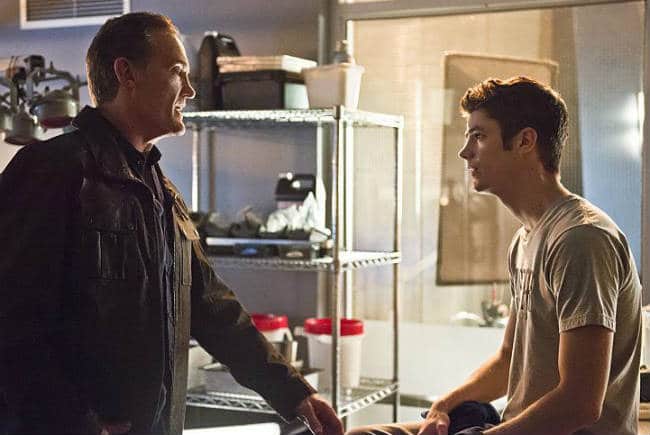 Henry knows what it’s like to have his name dragged through the mud. He understands the place Barry is coming from. But he also believes Barry has a lot more to give. Barry once gave him hope when he was at his worst, now it’s time for Henry to return the favor.

Elsewhere in the episode, Barry isn’t the only one besieged by feelings of guilt. Earth-2 Wells is also feeling the pressure of his part in Zoom’s attack. In fact, he’s experiencing such remorse that he makes plans to leave. Much to everyone’s surprise, Caitlin refuses to lead him to the breach in S.T.A.R. Labs or let Cisco assist his return with his speed canon. She believes that as a team, they all need Wells in order to defeat Zoom. They cannot protect their city without him.

Hoping to reach Wells, she appeals to him through his daughter and promises their help if he would stay and fight with them. As a team. This leads them to a new idea. If they can figure out a way to close all of the additional breaches, leaving only the S.T.A.R. Labs option open, they might have an edge. For now, Wells seems willing to stay put.

The Return of Grodd

I’ve never really cared for anything that involves apes, so seeing the return of Grodd and the King Kong-esque plot with Caitlin in “Gorilla Warfare” was something I could take or leave. But since he was back, the story unfolded regardless of my thoughts. Back to his old tricks, Grodd controls the mind of a doctor in order to obtain a serum. Naturally, the death of this scientist is a case assigned to Patty and Joe. Patty later learns the serum is used for Vertigo (a name familiar to Arrow fans) or for mind control purposes. 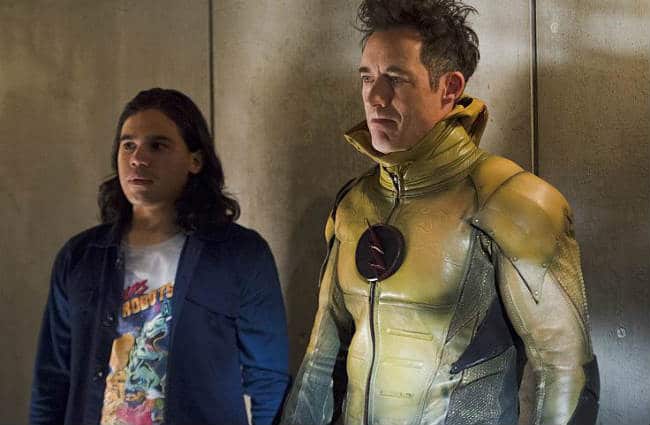 During this time, Grodd gains control of the one person who was kind to him: Caitlin. When Caitlin comes to, she’s in Grodd’s lair. It’s here she learns that Grodd wants her to help him create more of him. While she’s gone, Cisco and Wells make every attempt to find Caitlin. As they are prone to do, they dig up three possible locations and set a plan in motion. With the help of the former Eobard Thawne’s (Dr. Wells) Reserve Flash suit (this stirs up all kind of bad memories for Barry), they make plans to fool Grodd. They want to distract him into believing that Earth-2 Wells is the “father” of Grodd, Eobard Thawne. 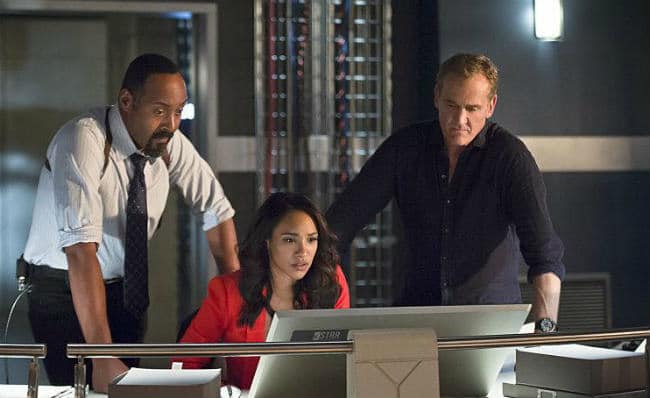 Grodd doesn’t fall for the trap, but everyone manages to get away with mere scratches. Back at the labs, the team has to brainstorm how best to deal with Grodd. Despite Caitlin’s sympathy for the beast, they cannot let him roam freely. Instead, they decide to send him to Earth-2 where he can live among his own kind. Thanks to his father’s pep talks, Barry regains his confidence and with the help of Cisco’s gadgets, reenters the field in a successful mission to send the gorilla through the portal.

Since the episode was lighter on the dangers, a light shone on some of the potential and in progress romances. The one with the biggest reveal was Cisco’s first date with Kendra. Cisco only knows her as Kendra, the barista, but on their first date, which involves a movie and hand holding, Cisco has a vibe. What he sees (a winged creature) scares him off and he leaves their date before it can get started. Later, he tries to make it up to her by wooing her with a picnic meal. Their kiss slips the last piece of the puzzle in place: it wasn’t a creature Cisco saw, it was Kendra herself. A Cisco/Kendra centric relationship might be doomed from the start since Kendra is about to become a major player on Legends of Tomorrow, but the idea of Cisco having a girlfriend is a fun thought. 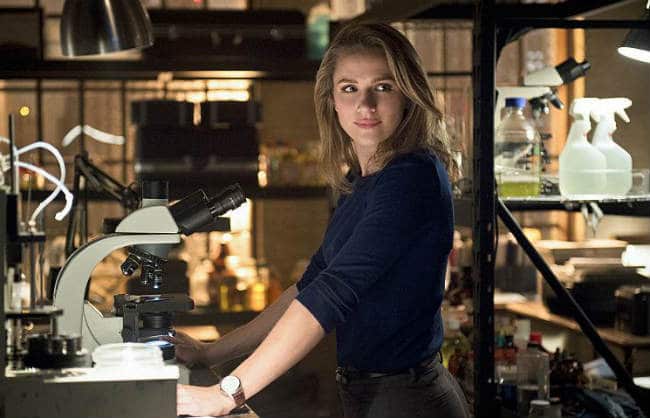 Patty and Barry’s relationship also makes an appearance. Worried about Barry (who she is told is ill), she attempts to make contact with him by offering to bring him soup. Barry refuses but is later caught in a lie. After seeing his father off at the bus station, he follows Joe’s advice and goes to see Patty at the station. He tells her the only thing he can. He wasn’t really sick, and instead he was visiting with his father. If they’re going to have a relationship, she needs to trust him and he needs to trust himself. They end their conversation with smiles and Barry leaning in to give Patty a sweet kiss.

– For the first time in many episodes, an allusion was made to Joe having a biological son. I’m betting this is indicative of a future where we’ll be seeing the long lost son of Detective West’s.

– Patty continues to be a bright spot addition in season two and given her growing curiosity, I suspect she won’t be left out of the Team Flash loop for much longer.

– The writers continue to intrigue me by the presence of Earth-2 Wells. I’m conflicted whether or not he can be or should be trusted. Thoughts?

What’d you think of ‘Gorilla Warfare’? Did you like it? Have any thoughts on the characters in this installment, and where they might be going? Comment down below with your thoughts. As always, I’m open to discussing The Flash with you all. And on an unrelated note to Tuesday’s episode: how amazing does December 1st’s The Flash and Arrow look? Pretty epic methinks!