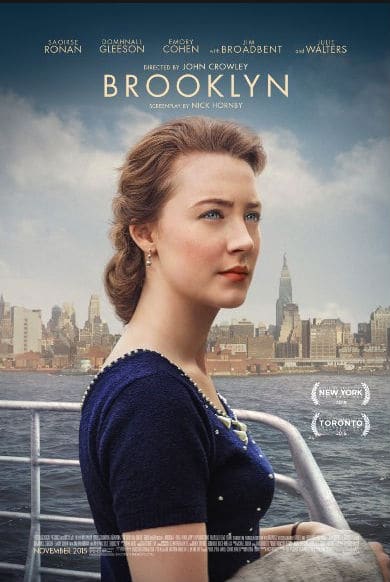 Brooklyn (2015) is a film about an Irish immigrant in the 1950s and the choices she must make in life and also, therefore, love. Directed by John Crowley, starring Saoirse Ronan, Domhall Gleeson, and Emory Cohen, it’s a beautiful watch and my favorite movie of the year. Here’s why!

How to Immediately Fall In Love With Brooklyn

Brooklyn has the feel of a classic film because it has all the elements that warm your heart. Saoirse Ronan plays a young woman from Ireland who immigrates to Brooklyn in the 1950s, leaving behind her mother and sister in search of a better life. She lives in a boarding house and works in a fancy department store, bitterly lonely until she adjusts to life in Brooklyn.

After a while, she starts to like living in Brooklyn as she begins attending class at Brooklyn College and dating an “Italian fella” named Tony Fiorello. (Somehow, this is now a super attractive name to me. Like, I really wish I could date a Tony Fiorello now.)

It’s the 1950s, and for some reason because of that I feel like saying “dating is in full swing!” but what I really mean is that in movies people seemed to go to swing dances and date. Which is what Tony and Eilis do, and they fall in love. This was such a wonderful part of the film…it’s simple, it’s sweet, it will just make you so happy to watch. He’s not a questionable guy with a bad past, he’s just an honest plumber living with his family. They’re from different cultures, but in the time of immigration it seems less conflictual to marry outside one’s culture because you’re in the melting pot and you have to assimilate. Or…is it even more conflictual because all you can do as an immigrant is hold on more tightly to your own culture?

This question of where your heart and loyalty lies is explored when a family emergency sends Eilis back to Ireland, where she grows comfortable, back at home. Oh, home, that whisper of a word you can never hide from. It always finds you. So many movies and books have the theme of returning to your roots, but for immigrants this conflict – between home and a new life – is inexpressibly difficult. It was heart-wrenching to try to imagine how Eilis, and so many others, must have felt coming to America. Eilis does not just have to decide between an Irish and an Italian man, she has to decide between home and her new life in Brooklyn. I think of rom-coms where the character vainly struggles to follow their dreams as a writer instead of a teacher and those struggles seem silly in light of this character struggling to decide between following her heart when it means traveling so far and sacrificing everything she’s ever known.

To make this film exceptional, the acting and cast were superb, featuring Julie Watson from Harry Potter, Jim Broadbent, and even Felicity from Arrow! Emory Cohen was made to play adorable 1950s Italian men and Domhall Gleeson was striking as his tall, suitable, kind Irish counterpart. The ladies from the boarding house provided a sort of community for Eilis and provided some pleasant humor. Saoirse Ronan was dizzyingly good, and I really recommend this movie for all to see. No part of it was boring – in fact, Eilis’s story, from start to finish, was engaging and compelling. It’s parts humorous and parts quietly sad to see her leave on her own, a naive, lonely girl and become a confident woman taking her place in Brooklyn as the film goes on.

The story is both gripping and touching while honestly, completely ordinary. But it’s always the regular things in life that make for the most touching, real tales and Brooklyn capitalized on that. I mean, how many people have had to leave beloved family behind and cried about it daily? Millions! Billions! But even though immigration is the backbone and the basis of this country, the movie made me stop and wonder just how hard it is to do.

I imagine that if I were an Irish immigrant (or an immigrant at all) I would have cried many tears at this lovely film, for it isn’t a gritty historical drama on the struggles of immigrants, but a smooth, lovely film that pulls at your heartstrings while touching on those many conflicts. Many, I think, would identify with the fears of being alone in a new country for the first time, the wonders of first love, and the feeling of family tugging you back home. Do you go for the first-love passionate romance that comes with sacrifice or a comfortable, ideal one surrounded by things that make you happy and a person who could as well? I used to always answer, obviously the former, but family and home carry a strong weight. (I mean, we’ve all seen Sweet Home Alabama.) Eilis’ love triangle is incredibly stressful but very good, which was surprising to even me since I had already picked a favorite.

Brooklyn made me go home and play only 1950s hits and again wish that I could somehow visit that time period. It’s a film that made me want to use the words “exquisite” and “marvelous” in this review – I want more movies like this! During the film my sister and I emotionally clutched each other’s hands (particularly at close-ups of Emory Cohen’s face) and made slight sobbing noises at Eilis’s tough decisions and overall felt like our hearts were warm. Because that that was how the film was. Heartwarming.

Brooklyn is based on the novel of the same name by Colm Toibin.

RATING: Brooklyn is PG-13 but the content is mainly PG, save for one sex scene.

*I tried to watch this movie twice, but the second time it was on a Saturday night in NYC and for some reason every New Yorker in the world was out seeing it because all 3 theaters I went to were sold out (who could have foreseen such?)! Alas, I had to settle for Crimson Peak instead. Which was a good period drama, but Brooklyn was better (sorry Tom Hiddleston!).