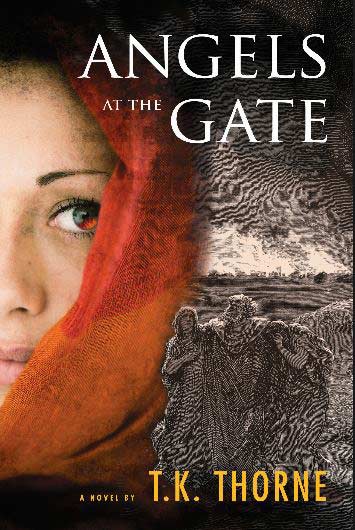 Angels at the Gate Review

Adira enjoys her freedom living in her father’s caravan traveling through the lands of Canaan.

However, Adira’s freedom comes at a price, for her entire life she has been raised as a boy, and no one — other than her father, Zakiti — knows the truth.

As “Adir”, she is able to move freely about the caravan and learn the skills of her father’s trade, instead of being regulated to more female duties.

The caravan is traveling to their tribe’s elder Abram. Three mysterious men, one old, two young, who are not part of Adira’s family have joined the caravan. They are unlike anyone she has ever seen before, and rumors have started about who they really are — giants or angels — and Adria is curious about their origins. On the way to Abram, Adria’s father reveals the motivation behind their journey to Abram; she is to stay with Abram and his wife Sarai. Adira is on the cusp of womanhood, and Zakiti fears that she will not be able to settle down with a good enough man if she stays living under the guise of being a boy for much longer. Adira is outraged but has little choice to disobey her father’s wishes.

After a fall from a horse and an encounter with a wolf leaves Adira with a fractured rib, she and Zakiti accept assistance from the mysterious men. Adira learns their names, Raph, and Mika, and finds out that they are brothers. From their first interaction, Adira begins to have feelings for Raph; feelings she never experienced before. To repay Raph for his kindness in tending to her ribs, Adira makes a deal with him. He doesn’t speak their language very well, and having been at her father’s side while he made trades and contracts with people of different places, Adira has a good grasp of language and agrees to teach Raph and Mika. They start their lessons, and Adira is able to spend more time with the brothers. As the caravan reaches Abram and Sarai, Adira knows that her time with the caravan will soon end. But Abram’s nephew Lot wants to host Adira and her father at his home in Sodom. Raph and Mika, whom Lot sees as exotic, come along as well.

Adira cannot deny her feelings for Raph, and wonders if marrying him will provide her the opportunity to stay with the caravan and not have to leave all that she knows behind.

The city of Sodom does not appeal to Adira, who is used to the open expanse of the world rather than being gated in. While in the city, a lightning storm strikes, seemingly set off by Raph and Mika. This begins to rise suspicions about the men, and Lot is certain that they are, in fact, angels. Adira is not so certain, but she does know how she feels about Raph. Her father has returned to the caravan to deal with some problems that arose, and Adira, Raph, and Mika leave Sodom to make their way back to the caravan. Unfortunately, tragedy strikes when a raiding party attacks them, taking Raph and killing Adira’s father. Adira decides to go after the raiders, and Mika comes along with her.

As they journey the desert, on the hunt for the raiding party, they are taken in by another caravan. Adira decides to keep up her facade of being a boy, and though they are cautious, her gender is revealed and Mika lies to their hosts that they are married, wanted by dangerous men and that Adira dressed as a boy for protection. His lie is good enough to satisfy the hosts, and they are left alone. Adira and Mika discuss their options of what to do to figure out where Raph is, and Mika reveals that Raph was taken because of a special token they carried; a box of great power. However, Raph does not know how to use it, but Mika does, and he is racked with guilt that his brother was taken instead of him. A chance encounter with the raiders again, who attack caravan’s herd of camels, brings Adira closer to her father’s killer and Raph’s kidnapper. The caravan is able to rescue another person from Adria’s past: the cook from her caravan. He reveals that he was able to kill the man who killed Adira’s father and that he knows where Raph is, in Babylon. The second part of her journey is set, and Adira and Mika leave the caravan behind to travel to Babylon.

It is in Babylon that Adira must confront a king for the Raph and Mika, face her feelings for the two brothers, and decide what she wants for her future. Her journey will take her from the city back to Canaan and through the desert once more, before her true fate is revealed.

T.K. Thorne gives Adira a strong voice, one that will draw readers in from the first page. With historical novels such as this, it is easy to place a character with modern sensibilities into a plot that cannot sustain it, but it works incredibly well here. The emotional journey that Adira has is a coming of age story, but her character shows that people can change their path; that they don’t have to live up to what others expect from them. Adira is one tough woman, and I loved the way in which the author brought in historical details to give her a well-rounded personality.

Adira has her faults, but she is able to overcome insurmountable odds to seek redemption and justice not only for her father, but for herself.

There is a good balance of romance and action in the novel, and without one overpowering the other. Adira has her moments of uncertainty — which of the brothers does she really love? — but the romance is more than a love triangle and provides the story with an emotional depth that isn’t always present. Her world is slightly romanticized overall, but the harshness of the desert isn’t. Adira experiences both joy and pain, and at the close of the novel, the reader will be satisfied with her choices. I would highly recommend this to readers who loved Anita Diamant’s The Red Tent.

Angels at the Gate would work best as a feature film, providing audiences with great geographic views of the Middle East, imagined as it once was. As I was reading, I was imagining scenes from Tarsem Singh’s The Fall because the aesthetic of wide expanse of beautiful locations in that film could also be used here.

As Adira, I would cast Odeya Rush, most recently seen as Fiona in The Giver and soon to be seen in the film Goosebumps. She has shown that she can handle action and romance, and I think she would bring vulnerability to Adira’s character while also playing up her strengths. For Mika, I would cast Daniel Sharman. In his roles on the shows Teen Wolf and The Originals, he can play up mysterious, and he’d bring that to the role of Mika. For Raph, I’d cast Jamie Blackley, most well-known for his roles in If I Stay and Snow White and the Huntsman. As Raph, he’d be a good counterpart for Daniel Sharman’s Mika, and from If I Stay, Jamie has definitely proven he can play a good romantic lead!

Our romance-themed entertainment site is on a mission to help you find the best period dramas, romance movies, TV shows, and books. Other topics include Jane Austen, Classic Hollywood, TV Couples, Fairy Tales, Romantic Living, Romanticism, and more. We’re damsels not in distress fighting for the all-new optimistic Romantic Revolution. Join us and subscribe. For more information, see our About, Old-Fashioned Romance 101, Modern Romanticism 101, and Romantic Living 101.
Pin this article to read later! And make sure to follow us on Pinterest.
By Clarissa Hadge on October 13th, 2015