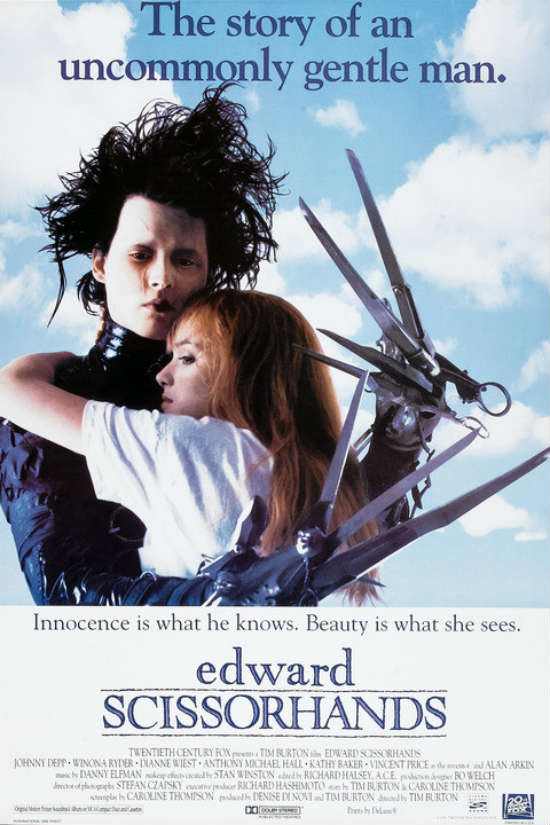 This article contains movie spoilers for many of Tim Burton’s films. Proceed at your own risk.

There are many films that combine two or more genres that one would think should not work together. Sometimes this works to brilliant effect while other times not so much. In some cases, these kinds of films make the audience wonder what the creators were thinking. Two genres that may not always fit together and is quite unusual are romance and horror. Can this unlikely combination ever work? Can the genres ever complement each other?

For some moviegoers, myself included, this is the right kind of recipe needed to hold interest. The romance can serve as a break from the horror and unrelenting suspense while the suspense and horror can add some thrills to a love story people have seen millions of times. Sometimes the mixture of these genres is just what some audiences need to be invested in the movie from beginning to end. Personally, I can never watch straight up horror films, they must have another genre mixed in, such as comedy or romance, and I can make it through the movie without having nightmares later.

One filmmaker who is often known for mixing these two genres together fairly well is Tim Burton. I have been a fan of Tim Burton’s for many years and though not all of his films are perfect or masterpieces, I still think he has made his mark in Hollywood, specifically in how his films rarely fit into Hollywood molds. If one watches enough Tim Burton movies, whether he is directing, writing, producing or some combination, one will notice how he likes to use the same tropes over and over again and this is evident in the romances that are present in many of his films.

Though I am not a huge fan of this particular trope, I like it sometimes and sometimes I think it can work. In Big Fish, I like how the concept is shown when Edward Bloom sees the love of his life, Sandra, at the circus and time literally stops as he walks toward her and all they focus on is each other.

When Peg takes Edward to her house and shows him the photographs of her family, Edward pauses at the picture of the daughter Kim. Peg describes what she is like, implies her age, and says when Edward can meet her. When she asks him if she is beautiful, Edward gazes at Kim’s photograph and expresses happiness, possibly for the first time since his creator died, when he smiles a little.

In Corpse Bride, when they first meet, Victoria shows Victor true kindness when she compliments his piano playing. During their wedding rehearsal, Victoria is the only one to show him patience, calm and understanding even when he makes so many mistakes trying to get through the rehearsal correctly. On Victor’s part when he first meets Victoria, he shows her kindness, respect, and even acceptance when she confides her childhood dream of marriage to him and her subtle desire to learn to play the piano. During the setting of the film, women were virtually meant to be seen and not heard. As a result of their repressed environment, many men would scoff at Victoria’s dreams and probably discourage them. Victor never did. These few hours of knowing each other and their tender, earnest moments were all it took for these characters to want to be together. Victor even says so to Victoria in a scene later in the film. “This morning I was…terrified of marriage. But then, on meeting you, I….felt I should be with you always, and that out wedding could not come soon enough!” Victoria says she feels the same.

In Edward Scissorhands, not only must Edward endure Kim’s original jerky boyfriend but also Kim and Edward face the prejudice and fear of the town.

In The Nightmare Before Christmas, Sally doubts she will ever end up with Jack because he is so focused on his Christmas goals and seems oblivious to her affections. Her song has always been one of my favorites in the film and perfectly illustrates her emotions and her character.

In Sleepy Hollow, Ichabod Crane subtly shows his affection for Katrina by holding her hand and gazing up at her.

In Big Fish, Edward plants Sandra’s favorite flowers in the yard in front of her house and woos her like a gentleman.

Not all gestures of love are grandiose

In The Nightmare Before Christmas, Sally gives Jack a gift basket with a lovely butterfly potion in a wine bottle. The gift brightens up Jack’s night but Sally, who is much too shy to face him, runs off before he can thank her.

When characters find love, they hold onto it in life and in death

In Beetlejuice, Adam and Barbara do not panic after finding out they are dead. Instead, Adam says being together is heavenly even in death and their tedious bureaucratic system.

Though I am not a fan of Tim Burton’s Planet of the Apes and I am sure many others would like it erased from their memory, the above picture does help make the point, no matter how uncomfortable it makes some viewers.

In Edward Scissorhands, Kim is one of the few who see past his deformities and sees his inner beauty and innocence.

In Sweeney Todd: The Demon Barber of Fleet Street, Mrs. Lovett shows her love for Sweeney in various ways despite him being more focused on his revenge. Her love for him sometimes blinds her to the consequences of their actions and thanks to a selfish decision she makes, they both end up getting hurt.

Portrays love even in old age

In Big Fish, despite all the hardships Edward and Sandra stay together and share an incredibly sweet moment in the bathtub.

In Beetlejuice, Adam and Barbra are summoned to entertain the living. Even when they rapidly decay, they still look at each other with deep love.

Even in hopeless and complicated situations, people can find love

Gotham is possibly one of the most dangerous and hopeless cities around. But despite that, Vicki Vale could not help but be enamored by the dark knight.

One cannot get more complicated then Bruce Wayne/Batman and Selina Kyle/Catwoman. Despite the complications, the feelings they have for each other grow even when they are in their spandex.

Characters are willing to sacrifice anything for those they love, even if that ultimately means letting them go

In Corpse Bride, Emily lets Victor go so he can be with the woman he truly loves and is alive.

In Edward Scissorhands, Kim moves on to live a normal life but part of her hearts still belongs to Edward. Meanwhile, Edward lives up on the hill and creates ice sculptures of her and everything else that he feels is wonderful. It is so sweet and fluffy one could call it cavity inducing.

What’s your favorite Tim Burton love story? Sound off in the comments…