The season premieres of Miss Fisher’s Murder Mysteries have consistently been served on platters of excellence, and episode one of season three, “Death Defying Feats,” starts the season off with a bang! This is not because the murder is a beheading (it was intense and shocking) but because the episode starts with JACK AND PHRYNE GETTING READY FOR AN OFFICIAL DATE AT HER HOUSE! We soaked up the slow-burn romance for the past two seasons and quite honestly while I’ve been dying for them to make progress, I wasn’t sure if I could handle it, after all of those wordless steamy eye-contact conversations. Their love is such a dream. They understand each other so well that their eye contact is the basis for their conversations (and the crux of the show). Here are several photos of said eye contact for your viewing pleasure:

Anyway, I digress from season three. Our quietly star-crossed lovers are interrupted by murder and ill-timed family visits before their date can begin (because the writers are cruel and the world is out to thwart them). A woman has been beheaded in a circus act gone awry (the Miss Fisher screenwriters like circus episodes, I think. Or the writer of the novels does. Luckily I like them too. It is a win-win situation.) and Jack and Phryne team up to solve the crime! However, the episode should be called Jack is Jealous because the main focus is his jealousy. Was this, therefore, my favorite episode? YES. YOU CAN BET ALL OF MISS FISHER’S EXQUISITE HATS THAT IT CERTAINLY WAS. 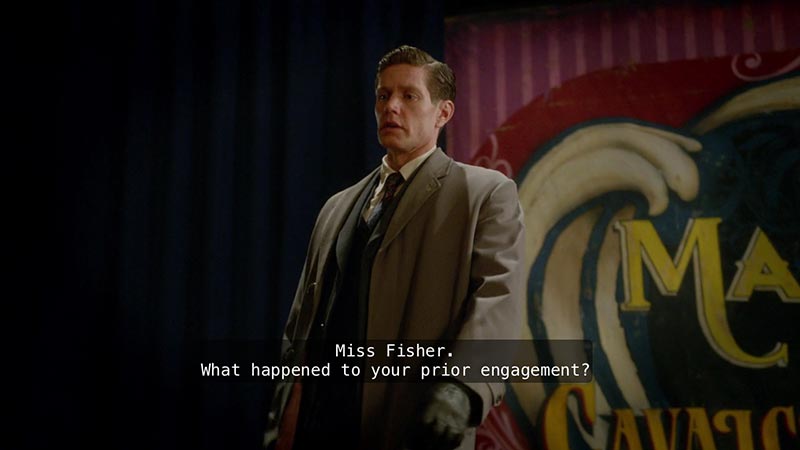 Translation of Jack’s icy politeness: “Yeah, what happened that you had to go BREAK MY HEART after we FINALLY were ABOUT to go on a DATE after EONS of sending love through our eyes?? I was ready to send love in other ways!!” 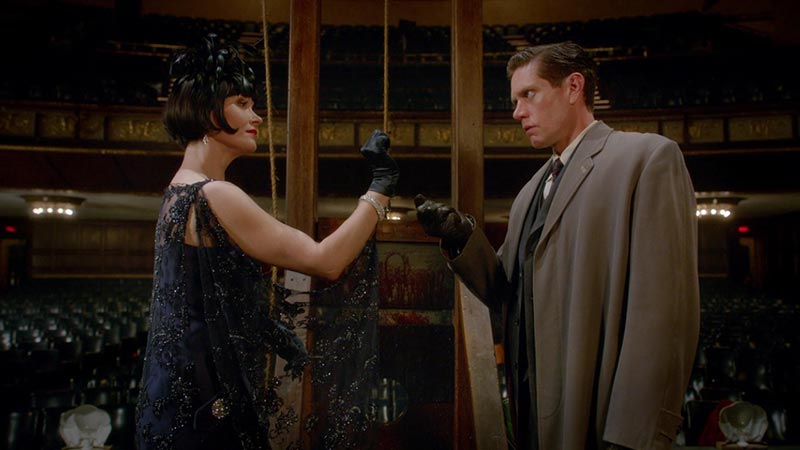 Miss Fisher dismisses his tawdry concerns by focusing on the beheading at hand. Jack tries to stay icy and polite, but he cannot help but be swayed by Miss Fisher’s irrepressible charm.(Because he JUST LOVES HER.) 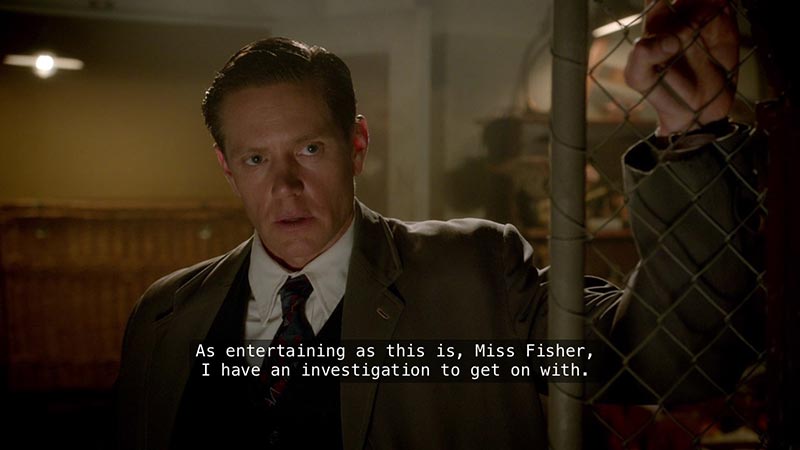 But soon, all good humor is LOST between them because Miss Fisher is being her flirty self around OTHER BOYS! Look at this cold, professional aloofness! 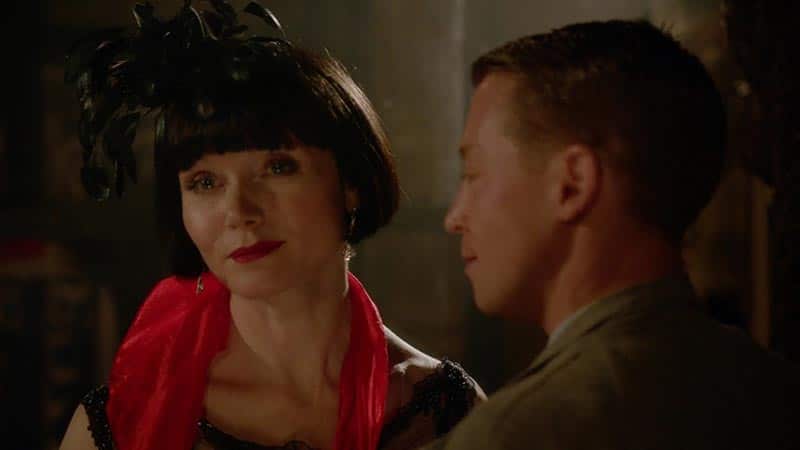 Miss Fisher appropriately responds with a disapproving pursing of her lips at Jack’s silliness. She only has eyes for him, obviously. She is just trying to wheedle information out of unsuspecting men in her usual blameless way! To everyone’s utter delight, the jealousy continues! And to no one’s surprise, Miss Fisher handles it as efficiently as everything else. 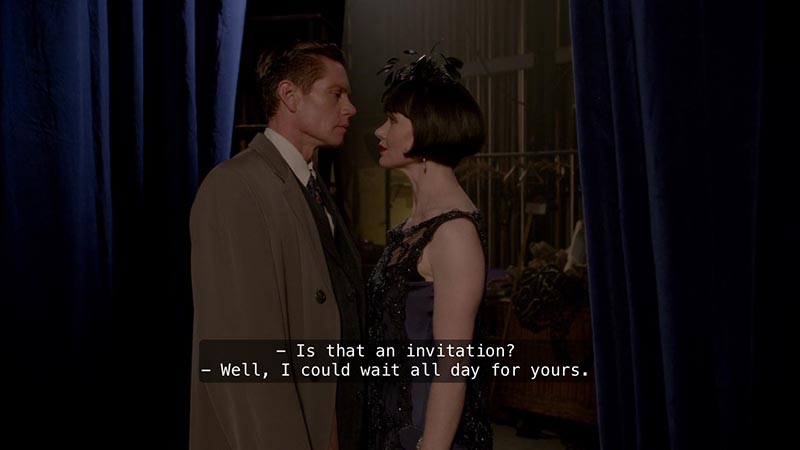 She also flirts him up a bit because he’s being an idiot and SHE OBVIOUSLY LOVES YOU JACK! (Actually, it is not always obvious. See: Lin Chung, tango dancer, anarchists, circus performers etc.) 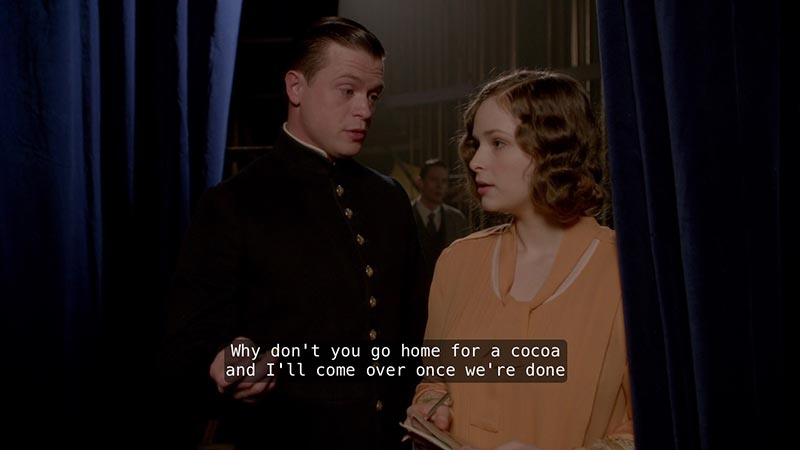 In the meanwhile, we get a glimpse of the cutest couple to ever grace TV, as they discuss what sounds like a GREAT plan to me. Hugh and cocoa?! What more could you ask for, Dottie? (The answer to that question is: equal footing, partnership in detective work, etc, but the idea of Hugh and cocoa is so distracting that the other issues slipped my mind.)

Anyway, Miss Fisher apologizes for standing him up and invites him for another date. But this, too, does not turn out well, and poor Jack waits hours for Phryne’s arrival. When she does arrive, he has a passionate speech ready for her, in one of the most adorable, memorable scenes of the show. Jack admits his dislike of her “parade” of men and his insecurity of not being liberal enough for her. Honestly, if that doesn’t make him perfect for her, I don’t know what can. The speech showed how deep his love was for her, and addressed a possible issue in their potential relationship. 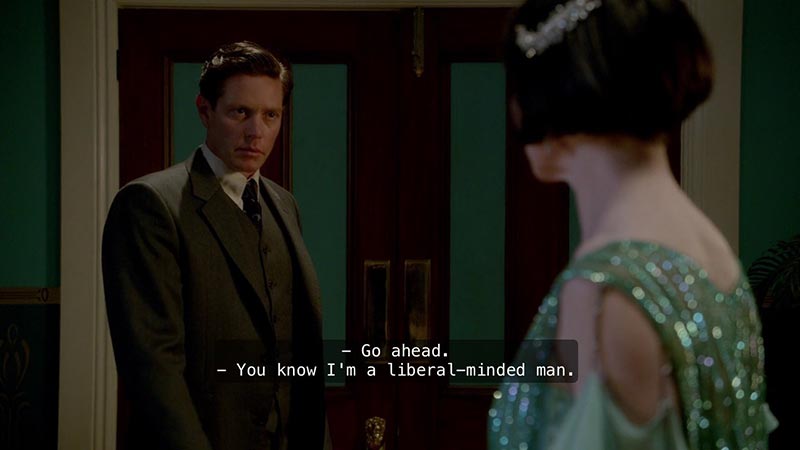 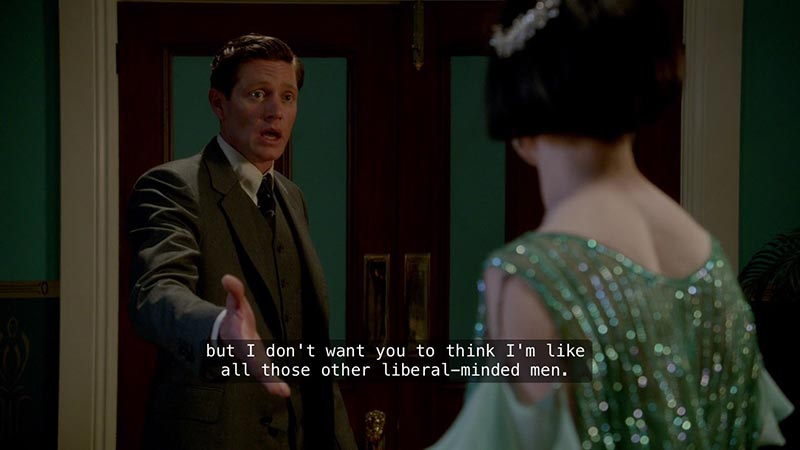 No Jack! You are too special to be grouped with them!!! Also, you have a hot sleuthing detective coat!! Did any of them have that!! No!!! 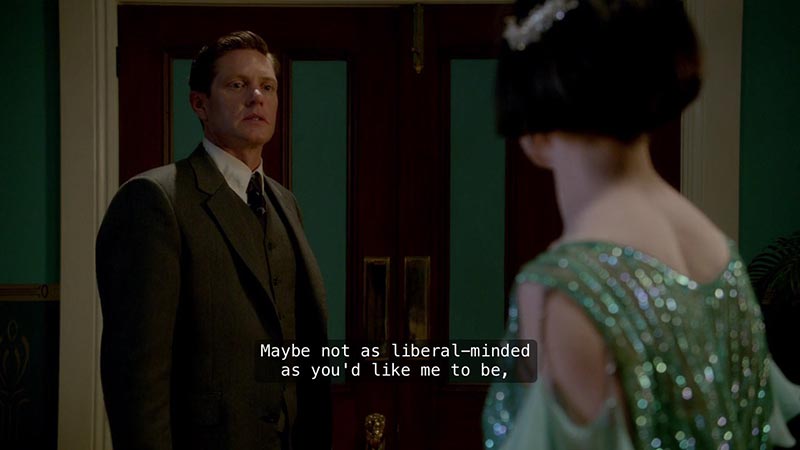 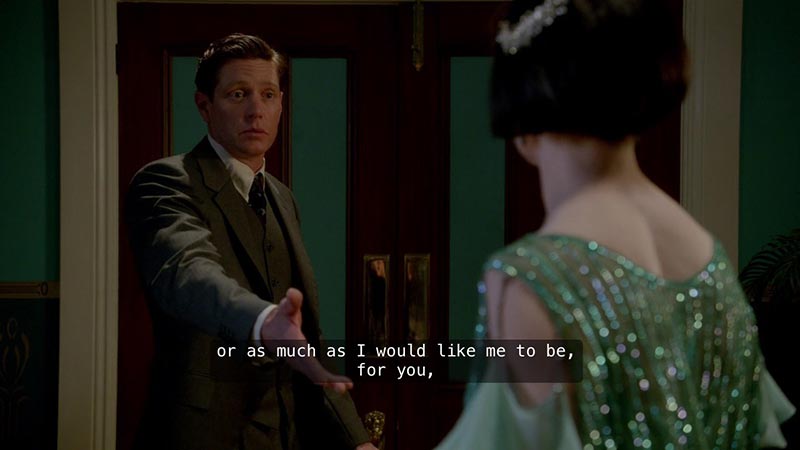 This line is really what got me. Aw, Jack! 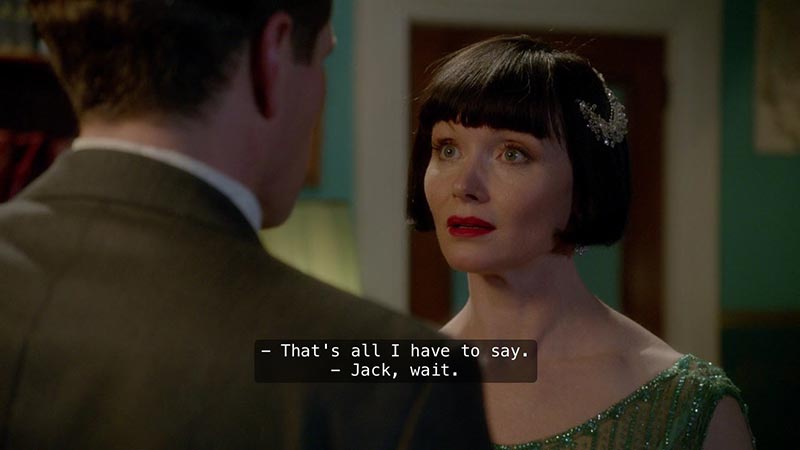 It was nice to see Miss Fisher a little bit thrown off her game, rather than her constantly suave self. She also looks quite beautiful here in this green! Jack must’ve eaten his heart out. Jack felt like a proper fiend, I suspect, when he woke up after he got very drunk and knocked out by a door. But look on the bright side, we got to see how cute he is all rumpled and confused!

The rest of the episode focuses on Dottie’s attempts to work together with Hugh, and Hugh’s rebuffs of her help because he’s uncomfortable with her being as important as him in detective work. Hugh is a fan of facts, I think. He has to follow procedure. The sky is blue. Water is wet, etc. I would not blame Dot if she rolled her eyes.

Dot plays a larger role than usual in stopping the killer at the start of season three. One of the real highlights of the show is Dot’s character growth from the obedient, innocent, biscuit-baking Catholic maid to a girl who knows her worth. I liked how the show portrayed her, though, because she’s as much the assertive girl as she was in season 1, asking Hugh to the ball herself. She’s just more on board with Miss Fisher’s antics and ready to commit to sleuthing and being a working woman.

The team solves what turns out to be a thrilling crime, with Phryne as per usual casually performing some life-risking acts to find the killer.

My only concern was: will they ever have their date?! Thank god Netflix has the entire season up! Stay tuned for another Miss Fisher’s Murder Mysteries Recap!

What did you think of the season 3 premiere episode of Miss Fisher’s Murder Mysteries? In love with Jack and Phryne as much as I am? Sound off in the comments…

Our romance-themed entertainment site is on a mission to help you find the best period dramas, romance movies, TV shows, and books. Other topics include Jane Austen, Classic Hollywood, TV Couples, Fairy Tales, Romantic Living, Romanticism, and more. We’re damsels not in distress fighting for the all-new optimistic Romantic Revolution. Join us and subscribe. For more information, see our About, Old-Fashioned Romance 101, Modern Romanticism 101, and Romantic Living 101.
Pin this article to read later! And make sure to follow us on Pinterest.
By Amirah Yasin on October 1st, 2015