There are some films that just dance onto the screen, proceed to do a happy jig and leave a smile on the face of the audience for the entire run of the film. The Decoy Bride is one such film. Starring David Tennant, Kelly MacDonald and Alice Eve, the story is a clever and adorable addition to the romantic comedy genre and one of my comfort films. It was released in March of 2012 in both the US and the UK.

I do want to give a warning, there is a near-drowning in this film, so please be aware of that.

RELATED: Music Video Vault: The Decoy Bride-Hide You Far Away 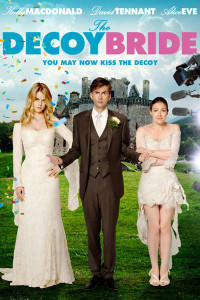 The film opens with the wedding of eccentric yet famous movie star Lara Tyler and author James Arber being crashed by determined paparazzi. Because of Lara’s fear of the paparazzi and her disdain for the way they hound celebrities, the two need to find a place that’s remote for their wedding. This leads them to the island of Hegg, which James had used as the site for his first novel, The Ornithologist’s Wife, Lara’s favorite book.

Hegg is part of the Outer Hebrides and is, for the most part, inhabited by older couples. Our first introduction to Hegg is through the eyes of Katie Nic Aodh, a young woman who finds herself back on the island after trying desperately to leave it.

The Laird of the Island, hearing that a large group of Americans are coming to the island for a marketing conference (the cover for the wedding), convinces Katie to help him write a guidebook to Hegg; a logical choice as she is, in fact, a writer.

Previously, Katie worked in Edinburgh, writing for an online catalog company and was engaged to a guy who performed in a band. He cheated on her, so she went home to care for her sick mother and mend her broken heart. He had told her that she was just one song, not an album, a theory that weaves its way throughout the film.

Marco Ballani, the most determined member of the paparazzi, who chases Lara across the world, follows James and Lara to Hegg. Lara sees him and runs away, getting lost on the island. Lara’s agent Steve, who is very good at his job, has the idea to find a decoy bride to throw Ballani off the trail. Once the picture has been taken, he figures, Ballani will leave and the wedding can proceed as planned.

Katie, as the only single young woman on Hegg, is chosen to play the decoy. Through a series of accidents, James and Katie end up actually married. The plot thickens as Katie and James realize that they have met before and she had criticized his book. As James has written the only book about Hegg, and it is really a terrible book, they immediately butt heads about it, her work, and their situation.

Meanwhile, Katie’s mother is dying throughout the film and just wants to make enough money to travel the world before she dies. To accomplish this, she calls the paparazzi to the island to get wedding photos. Lara tracks her down and, as fits into her personality as one of the nicest, most genuine people ever, they are able to talk and become friends of a sort.

Luckily, Lara tells Katie’s mother where she wants to meet James, so he and Katie set out to become divorced. The more time they spend together, the more their mutual attraction grows. As they are married, trying to get divorced, engaged to other people and avoiding the paparazzi, Katie, and James find themselves trying to figure out what to do with their careers and what this attraction means for them. The film is clever and really quite hilarious, as it follows two people in the strangest of situations on one of the strangest days.

The film is clever and really quite hilarious, as it follows two people in the strangest of situations on one of the strangest days.

James has been trying to write a second book for years, but he’s got a bad case of writer’s block while Katie is just trying to make her mark on the world as a writer. They give each other lots of things to think about, and their time together does change them both for the better.

Out of respect for people who have a thing about spoilers, I’m going to talk about the ending below the spoilers line. Before I get to that, though, I do want to mention that the story is different enough from other romantic comedies to feel fresh and different. MacDonald and Tennant have great chemistry, and they also play off of each other brilliantly in the comedic moments. This combination makes the movie sweet and fun. Alice Eve is great as Lara Tyler, and the three of them keep the story from becoming a typical love-triangle by conveying the humor and the clever writing.

Katie and James get divorced though she takes the plunge and tells him that maybe he and Lara aren’t right for each other after all. In that case, he could stay there, with her. In a call-back to her ex’s words, she says that she knows, she’s just a chapter, not a whole book, as he leaves. They are both obviously torn about how they feel about each other.

Then, the story flashes forward to a year later.

Katie’s mother has died. Lara continues to be a genuinely nice person, funding a trip for Katie and her mother to travel the world before she died. As the ending unfolds, we learn that James and Lara ended up not getting married when they realized that they really weren’t right for each other.

Katie’s guidebook to Hegg has taken off, a second edition is being published and she is suddenly in demand as a writer. James publishes a second book that is only one chapter long, dedicated to his wife.

As Katie is leaving, James arrives on Hegg to talk to her, asking if she read his book. She hasn’t, but learns that the dedication read, “To my wife. A chapter can be a book.” This, of course, contradicts what she said to him at their divorce. Determined to not let her get away again, he tells her about his new book, she puts together the pieces and realizes that he loves her. I assume they live happily ever after, helping each other be better craftsmen and people in general.

There is one other thing that I want to talk about and that is the Lara/Marco thing at the end. While I understand what the film is trying to do, the fact that Lara falls in love with her stalker, for lack of a better word, makes me a bit uncomfortable. The best I can see is that when she’s in disguise and they’re talking, she discovers that they have a lot in common, particularly when it comes to how they work and how they express themselves.

On one hand, it was nice to give Lara an alternative to James; she’s a great character who you only want the best for as the film progresses. I think that maybe the idea was to emphasize that she was more in love with the idea of James than the actual man, but to me, it comes across as a bit creepy, especially in contrast to the main love story between Katie and James (which is consistently adorable).

The Decoy Bride is an adorable and quirky romantic comedy with fun characters, beautiful scenery, great music and a plot that will keep you laughing. It’s an underrated little gem of a film. Yes, it has some plot issues, but at one hour and 29 minutes, this is a great film to watch every time you need a laugh.