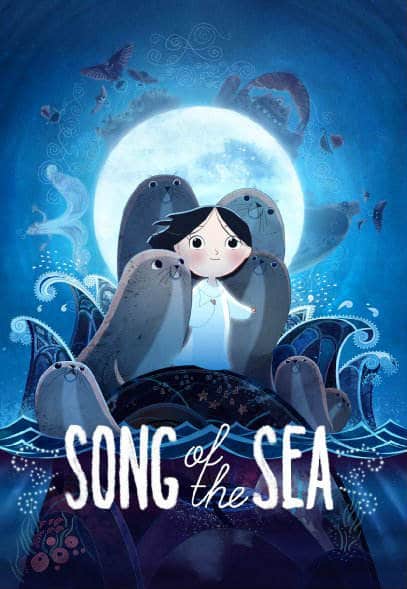 Song of the Sea is the newest animated work from the Irish animation studio Cartoon Saloon and director/writer Tomm Moore, who also brought us The Secret of Kells. I had already seen The Secret of Kells and though I did not fall head over heels for it like many people did, I still admired it for its animation, art style and how it was willing to tackle darker themes then most animated films. As a result, my expectations for Song of the Sea were high and I was excited to see more of Irish mythology. Song of the Sea is film that left me speechless in the best possible way. 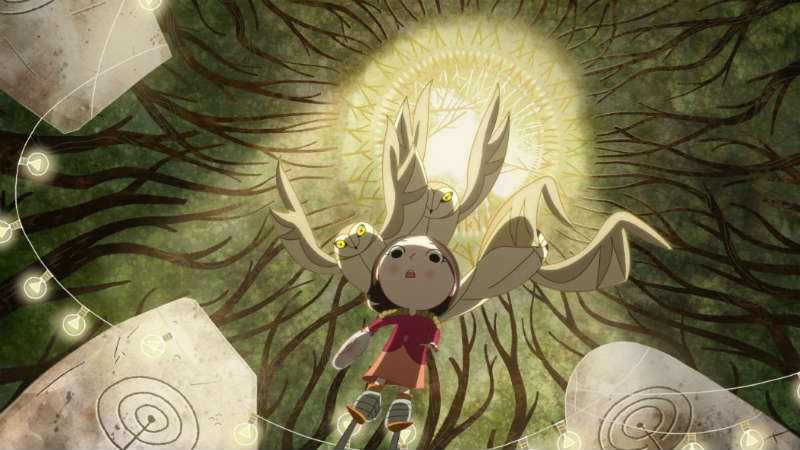 The film is based on Irish mythology of the selkie and is about two Irish siblings named Ben and Saoirse who discover a world of myth, magic and mystery which is in great danger, and is right alongside the human world, filled with a variety of fey folk: selkie, fairies, elves and witches. The children attempt to learn the secret of their magical heritage while they also uncover why and how their mother died.

Song of the Sea deals with grief, loss and the ways to handle such complex emotions.

I unfortunately cannot go into much more detail about the plot without getting into spoilers. However, I will say that the plot takes many turns and a few of those I did not see coming. Personally, I was completely engrossed in the story throughout. The film tells its story at a steady pace as if it is telling the audience, “Look around and enjoy because there is something for you to see at every corner.” The film is filled with quiet moments where the characters can be themselves and the audience can really soak up the atmosphere of this beautifully crafted world.

The film’s themes and messages are subtly placed and not hammered over the audience’s heads. Like The Secret of Kells, Song of the Sea does not talk down to its audience which is something that I always appreciate, especially when it comes to animated films. Song of the Sea deals with grief, loss and the ways to handle such complex emotions. The film also delves into a very adult concept with such subtlety and grace that it is easy to miss on the first viewing. The concept of refusing to deal with emotions that one needs to work through. Connectedness is another important theme: connectedness between humans, between nature and the human developed world, and between myth and reality.

If I had to find problems with the story, and keep in mind these are nitpicks, it would have to be that people without much knowledge of Celtic mythology might find it difficult to fully grasp the plot’s basic conflict. In addition, Song of the Sea never completely explains the “rules” of the mystical world that the children must save. However, to be fair the film is not really about that but rather about the relationship between Ben and Saoirse, which is right where the film needs to be. 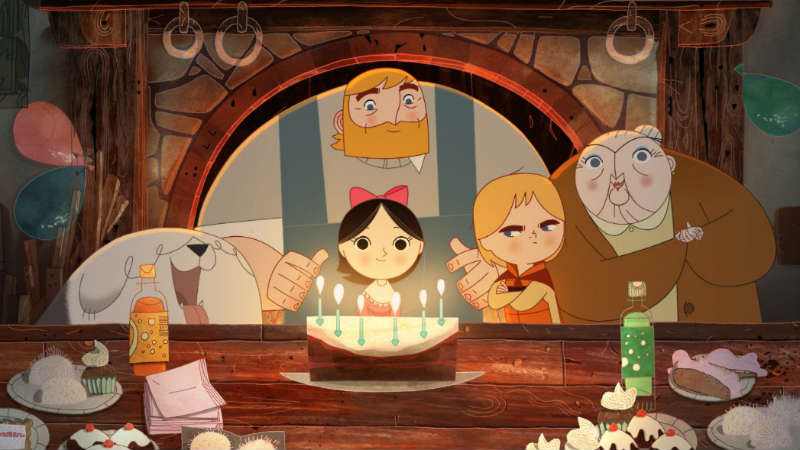 The characters are all enjoyable with each one having a subtly and emotional weight to them. Ben is the eldest child in the family and had a loving and close relationship with his mother. After his mother dies however he becomes bitter and resentful of his younger sister, blaming her for their mother’s death. Like several older siblings, Ben is irritated by everything his younger sibling does and does not do. He keeps the memory of their mother alive by telling her stories and remembering her songs. It is in my opinion that Ben is the character who goes through the most character development. Throughout the movie he must learn to not only come to terms with his own grief but also appreciate his sister. I found his character and development to be very realistic for a child his age, such as acting out because he does not know of any other way to express his feelings, and I understood why he felt the way that he did.

Saoirse is the youngest child in the family and despite her age, has not spoken a word. Throughout the movie, she must find her special song and her own voice. She is a sweet and lively child but also stubborn and determined. She always tries to get the attention of her older brother. She has an inexplicably strong connection to the ocean and all things from the sea. She feels the most comfortable in the sea and is happiest when swimming with the seals. It is a testament to the animation and visuals of this film that Saoirse feels like a fully fleshed out character despite hardly saying very much at all.

Conor is a light house keeper and the single parent of Ben and Saoirse. Some people find him to be an incompetent parent but I find him to be a rather sympathetic character and a parent who merely does what he thinks is best. His actions, even when they are made out of anger, still come from a place of love for his children and wanting to protect them. As the years pass he becomes bitter, grows distant from Ben and only Saoirse can put a smile on his face. He is still grieving for his lost wife and he must learn how to be there for the people that still need him.

Granny is Conor’s mother and has always held the belief that a lighthouse is too dangerous a place to live for children. She is fussy and always believes she knows what is best for others. I personally found her to be the weakest character but at the same time, she too is only doing what she believes is best for her family.

The magical characters are all very energetic and lively with each one having their own memorable designs and eccentric personalities. Each one feels like something not of this world and that is precisely the point. There are also some interesting parallels between a few of the magical characters and a few of the human characters such as the owl witch and a sea god. To say more would be spoiling but I will say that each character, even if their role is minor, is memorable and have subtlety to them that makes them enjoyable to watch. 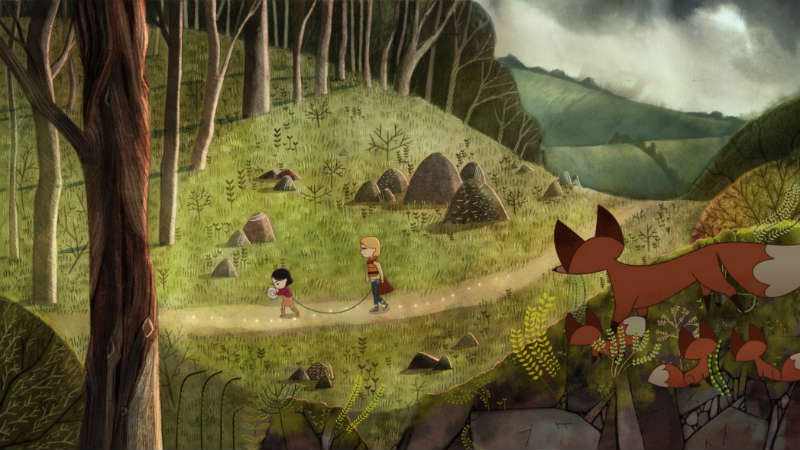 The animation is gorgeous. Just about every surface from seaside cliffs to colorful forests, are adorned with elaborate and beautiful line work. The landscapes and seascapes are so skillfully layered and framed that they could easily stand alone as paintings in an art gallery.

The character designs are mostly comprised of simple shapes such as circles with the human characters and more square-like for the fairies. They all move fluidly and realistically. Another nice element of the animation is how the animators would use computer animation to portray fairy light and magic. In addition, a hybrid of computer animation and hand drawn animation was used to animate the sea and crashing waves. The animators and editors did it in such a way so that the computer animation successfully blended into the 2-D world without looking out of place.

The animation for this film and The Secret of Kells was partially inspired by Samurai Jack. Tomm Moore has said in interviews that he and the other animators were inspired by Genndy Tartakovsky’s animation style and his ability to get a cinematic look out of something made for TV.[1] The film did not have the kind of budget that the films that it was competing against did the year it was released and so the artists had to choose an animation style that would work for their budget while still being lovely to look at and cinematic.[2]

The animation for both The Secret of Kells and Song of the Sea and the wonder and beauty they convey make me feel sad that the majority of the animation industry are doing computer animation. Both of these films are some of the greatest examples of what 2-D animation is capable of doing. 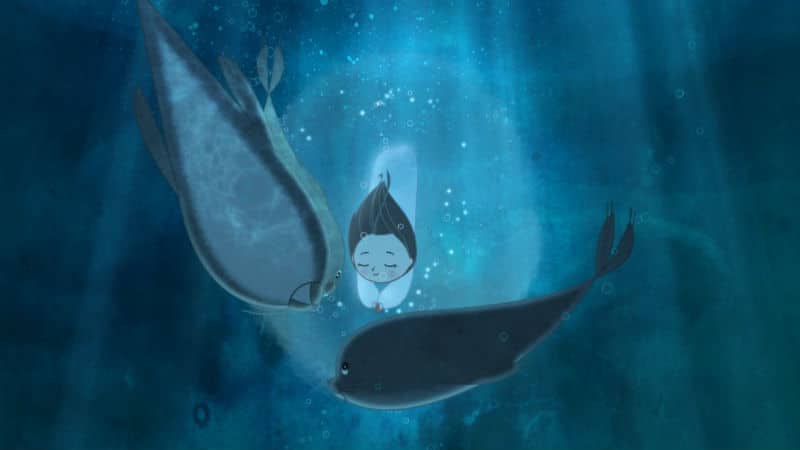 Though this is not technically a musical, I still want to talk briefly about the music of this film as it plays as much of an important role in telling the story as the animation. The film’s score was composed by Bruno Coulais, who also composed the score for The Secret of Kells. He also collaborated with the Irish folk music group Kíla. The music of the film fits the mood perfectly without ever being overwhelming. The music helps portray the various emotions the characters are feeling while also helps to establish the overall tone of the film. Another interesting element of the film’s score is how the singing voice of the mother is carefully layered throughout, which gives the mother a presence even after she dies and gives richness to the film.

Between the animation and music, Song of the Sea has the capacity to mesmerize the audience into wide eyed, silent wonder while telling a story that is charming, lovely, joyful, sorrowful, emotional and thought provoking. It is a film that personally left me wanting more and had me glued to the screen from start to finish.

[1] See more of the interview at http://thefilmstage.com/features/interview-tomm-moore-talks-the-secret-of-kells/

[2] See more of the interview at http://www.awn.com/animationworld/tomm-moore-talks-song-of-the-sea