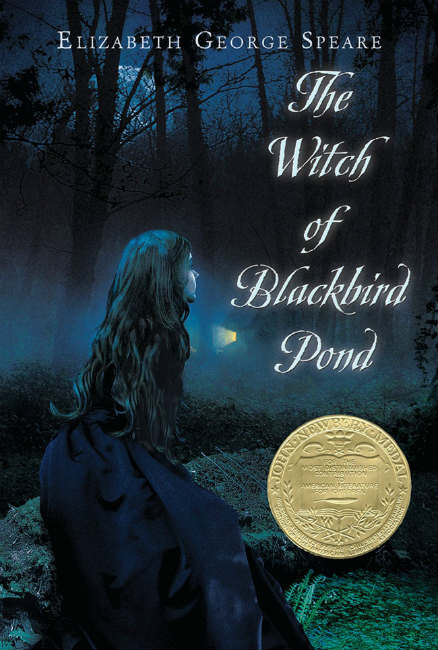 The Witch of Blackbird Pond, which won The Newberry Medal in 1959, is a children’s (or YA) novel that captured my imagination from the time I was a young girl. I must have been about 12 when I first read the book. Since then, I’ve read it many times. This latest reading, however, was my first in many years. How different a book reads from the perspective of a girl filled with youthful ambition and wide-eyed optimism than a grown woman looking back with an air of nostalgia. Would the story that filled many of my young hours still be as magical as I remember? Or would I find I had outgrown the story like an old skin ready to be shed?

Thankfully, The Witch of Blackbird Pond is a story that stands the test of time. From the very young to the very old, this wonderful piece of historical fiction by Elizabeth George Speare is a delightful and moving read for all.

From the very young to the very old, this wonderful piece of historical fiction by Elizabeth George Speare is a delightful and moving read for all.

The Witch of Blackbird Pond tells the story of 16-year-old Katherine Tyler (or “Kit” as she prefers to be called) in 1687 who leaves her childhood home of Barbados after the death of her grandfather. From there, she boards the New England ship the Dolphin to take a voyage to the Puritan town of Wethersfield, Connecticut. She goes with the hope and expectation of living with her Aunt Rachel and Uncle Matthew (as well as her cousins Mercy and Judith).

Along the way, she develops a friendship (and attraction) to the Captain’s son, Nat Eaton. She also befriends John Holbrook, a young man who plans to study in Wethersfield with the Reverend Gershom Bulkeley.

Upon her arrival to Wethersfield, it’s clear that Kit is different from everybody, an exotic bird in the wrong part of the world. It’s these differences that quickly inspire suspicion among some of the people of the town, particularly Goodwife Cruff who has a particular hatred for her. The suspicion then develops to dangerous levels when she befriends Hannah Tupper, the town “witch.” Eventually, the accusation of witch turns to Kit herself. But can she escape? Or will she be condemned to die?

One of the greatest aspects of The Witch of Blackbird Pond is Elizabeth George Speare’s ability to create such three-dimensional characters that they become real to you. Not one character in the story is painted as a one-dimensional villain or hero. Every character has flaws and strengths with human layers, which can sometimes be forgotten in the world today of political correctness (something I don’t believe belongs in storytelling).

Take Uncle Matthew. He’s a hard man, a staunch Puritan set in his ways, but as you (and Kit) get to know him you understand why. You also grow to love him and to see his courage underneath the rough exterior.

Even Kit herself is not without flaws. She’s impulsive, at times judgmental; even a bit snobbish in the beginning. Kit’s grandfather was a slave owner and she herself had a slave whom she sold. But instead of condemning her for her ignorance, the writer gives us her journey as Kit grows as a person. Katherine Tyler is a wonderful, feminist character who isn’t afraid to fight for what she believes in and will do whatever it takes to rescue those she loves. She is no damsel in distress, yet she accepts help when she needs it.

The historical part of the story is also superb. No doubt Elizabeth George Speare researched the time and locale intensively before writing the novel. The imagery and historical details bring you to this time and place, making you feel like you are actually there. And who says time travel isn’t real?

The Witch of Blackbird Pond is also a wonderful, love story. The growing affection between Nat and Kit is sure to make any teen girl’s heart go aflutter. It also works as a lovely reminder to us adults of what it felt like to be young and falling in love for the first time. That kindred spirit connection and love built on trust and friendship is what makes the relationship between them special. For anyone who loves relationships like Anne and Gilbert, then you will probably love the story between Nat and Kit.

On top of all the reasons that make The Witch of Blackbird Pond great, there’s just something about the story and characters that subjectively speak to me. Perhaps that’s what makes a great read in general. The best books are the ones who speak to us, are they not? They have a truth that touches our hearts and souls while also igniting our imaginations. That is what The Witch of Blackbird Pond does for me. Maybe it will for you too. It’s the kind of story that reminds me of why I fell in love with reading in the first place. The optimism, goodness, and feeling of being different spoke to my young self. And still does. It’s hard to say if books, movies, and shows like these help shape my human perspective (like Shirley Temple movies

It’s hard to say if books, movies and shows like these help shape my human perspective (like Shirley Temple movies, Road to Avonlea TV Series, L.M. Montgomery novels or even The Witch of Blackbird Pond) of hopefulness, empathy and kindred spirit love (whether romantic or otherwise), or if I was drawn to these stories because they speak to who I am and how I see the world. In other words, I believe that everyone has a story to tell and is worth listening to. And that’s the message that The Witch of Blackbird gives without being preachy. Like any good Beauty and the Beast story, Kit learns to love and understand a woman condemned by the community for being different. But she also learns to love herself.

In all, if you’re looking for a great Young Adult book to read, this award-winning children’s novel is a great choice. Especially if you love historical fiction, historical romance or even supernatural stories. While this isn’t a supernatural book, it has the qualities of one without actually being magical. Forget that this may have been a book you read as required reading in Middle School, and read it for what it truly is – an imaginative and wonderful book that will capture the imagination of readers everywhere.

I have been wanting this novel to be turned into a film since I was a young girl. Since they were in my age group, I used to imagine Elijah Wood (because of Nat’s intense blue eyes – yes, despite his sandy hair) and Anna Paquin in the lead roles. But actors in their early thirties are much too old now. So, while, I don’t have specific actors in mind, I still believe this would make a fantastic film. I honestly don’t know why there has never been an adaptation. The structure of the story plays like a movie from the introduction of the characters to the ultimate climax. Hopefully, one day my dream of seeing this story adapted to film will come true…Puritans, witch hunts, a period drama romance, unrequited love…what wouldn’t there be to love?

Have you read The Witch of Blackbird Pond? What are your thoughts on the book? Are there any books that speak to you? Share in the comments.

Our romance-themed entertainment site is on a mission to help you find the best period dramas, romance movies, TV shows, and books. Other topics include Jane Austen, Classic Hollywood, TV Couples, Fairy Tales, Romantic Living, Romanticism, and more. We’re damsels not in distress fighting for the all-new optimistic Romantic Revolution. Join us and subscribe. For more information, see our About, Old-Fashioned Romance 101, Modern Romanticism 101, and Romantic Living 101.
Pin this article to read later! And make sure to follow us on Pinterest.
By Amber Topping on June 5th, 2015

2 thoughts on “Vintage YA Review: The Witch of Blackbird Pond – A Delightful Feminist Work of Historical Fiction and Romance”