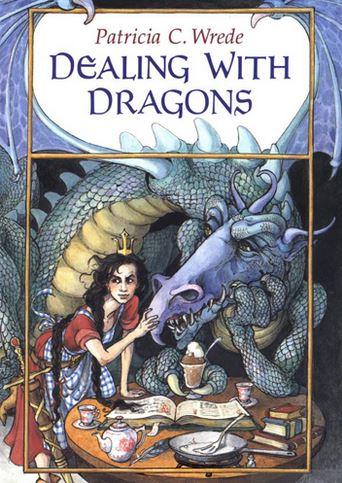 One of my favorite books as a kid was Dealing With Dragons by Patricia C. Wrede. As a fan of fairy-tales, I suppose this should have not come as a surprise to me. While Dealing With Dragons is not an adaptation of any specific fairy tale, it builds on the established world already created by the genre. Wrede has a delightful way of turning fairy-tale tropes on their heads and this story is no exception. This is a book for fairy-tale fans, though fans of Robin McKinley, Tamora Pierce, or Lloyd Alexander’s Chronicles of Prydain might particularly enjoy this story. Fans of Dealing With Dragons might also enjoy M.M. Kaye’s The Ordinary Princess, a tale about another princess who doesn’t want to live the life expected of her.

Dealing with Dragons is the first book in The Enchanted Forest Chronicles, which primarily deals with the interactions among three distinct groups; the Society of Wizards, the Kingdom of Dragons and the Kingdom of the Enchanted Forest. While the Enchanted Forest is mentioned, this book really sets up the conflict between the Wizards and the Dragons, setting the stage for what will follow in the other three books (Searching for Dragons, Calling on Dragons, Talking To Dragons). At about 200 pages each, these books are a fun and a fairly quick read. Wrede somehow manages to convince her readers to take the world she has created seriously while they are laughing at it. She seems to have a knack for writing in a humorous style that also conveys, when necessary, gravity.

We have as our heroine Cimorene, who hates her heritage as a princess because she finds it dull. The title of the first chapter, “In Which Cimorene Refuses to Be Proper and Has a Conversation with a Frog,” really sets the tone for the book beautifully. After years of bullying the palace staff into giving her fun lessons like fencing, cooking, magic, Latin and economics in addition to her princess lessons, Cimorene is betrothed to Prince Therandil. Her parents’ hope that this will help her become a more proper princess backfires when Cimorene runs away and meets the dragon Kazul and her friends. Kazul agrees to take on Cimorene as her princess. As Kazul’s princess, Cimorene’s main jobs are to help Kazul catalog her library and cook for her. Soon, a beautiful friendship is formed.

Of course, no one believes that Cimorene has volunteered to work for a dragon, as that is not proper behavior for a princess. As a result, many knights, including Prince Therandil, attempt to fight Kazul and save her. Cimorene spends the first part of the book getting accustomed to her new role and driving away knights, but the plot thickens when she encounters a wizard. Zemenar is the Head of the Society of Wizards, and he seems to be in many places he shouldn’t be.

While working for Kazul, Cimorene meets another princess named Alianora, a grandfatherly named dragon Roxim, a prince who has been transformed into stone and Morwen, a witch who lives in the Enchanted Forest with her cats. Between learning, cataloging and perfecting a fireproofing spell, Cimorene and her friends try to discover what the wizards are up to. It turns out that the Wizards are trying to collect information on the Caves of Fire and Night, but no one knows why. Most of the Caves of Fire and Night are part of the dragons’ kingdom and full of magic, but all three groups in the series have a claim to them. This makes the Caves a major plot point in three of the four books.

Soon after this discovery, Cimorene and Alianora learn that the wizards are harvesting dragonsbane and have an accomplice among the dragons. Dragonsbane is exactly what it sounds like, and the King of the Dragons is assassinated soon after. Cimorene, luckily, is not your typical princess. She uses her skills in Latin, magic and deductive reasoning to do her part to save the day, sprinkled with a very polite demeanor to almost everyone she encounters.

Wrede writes in the third person limited, so the only character that we can see in the mind of is Cimorene, and as Cimorene starts to piece together the puzzle, so do we. The way Wrede places clues earlier in the book and then refers back to them makes the book just as fun on the subsequent rereads. Although this is one of my favorite books, Wrede writes with a dry sense of humor and people who are not fans of that style may not enjoy the book as much.

I’m not going to tell you what happens in the end, but since this is a fairy-tale retelling, you can probably guess. Overall, the story is solid. What I do find myself wanting is a more in-depth study of dragon politics and more background information; basically, I find myself wanting a history textbook about this world. I also would love more description of the landscape as the author imagined it, though I have a feeling she will expand on the landscape in later books. Another thing I want to mention is that there is minimal romance, as Cimorene spends half of the book trying to avoid getting married. However, there is both potential in future books and a small side-romance, so the book gets partial credit in that category.

Dealing With Dragons is a fun and fast paced fantasy romp that does not get old with time. This book, as I said earlier, sets the stage for the other books in the series while still managing to stand on its own. It discusses dragon politics and the way various magical societies interact, but it also deals with the struggle of being yourself and learning that, at the end of the day, we all have different strengths, and that’s okay.

There is also a running theme of the importance of being polite. In the book, that is to prevent a dragon from roasting you, but the idea holds up in modern society. Manners matter. Despite the two great lessons that can be learned, I’ll be honest, any book with a heroine whose ideal job is the King’s Chief Cook and Librarian is bound to be a winner for this bookworm.

This is one book that I think the world is finally ready to see adapted as a film, and I would love to see done correctly. With the recent rise of CGI characters in otherwise live-action shows, this book (and the rest of the series) could be a delightful quartet of films. Technology is finally at the place where this enchanting and delightful series could be translated with the whimsy and magic it deserves.  I already have some casting ideas. Here are the four roles that I have ideas for: Jemima West as Cimorene, Colin Morgan as Mendanbar (I know he’s not in this book, but I want to plant that seed in everyone’s heads), Emma Thompson as the voice of Kazul and Emma Stone as Morwen.

Who would you cast in The Enchanted Forest Chronicles?

“I have not the pleasure of understanding you”