WHO IS HARRISON WELLS? 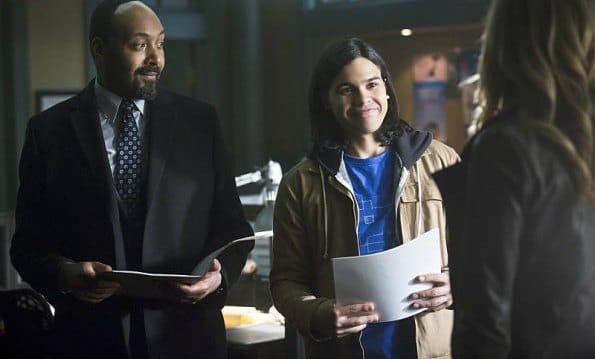 Tuesday night’s episode posed the question we have all wanted to know (or I have): Who is Harrison Wells? By all accounts he’s not the man former co-workers held in such high esteem. With another Arrow/The Flash crossover-like concept, last night’s episode again pushes some interesting theories. The opening lines are particularly so…

“I’m getting faster. Faster than I’ve ever been and lately I wonder if someone’s chasing me.”

It all begins with Team Flash (Barry, Eddie, Cisco, Caitlin and Joe) meeting up at Joe’s house. It’s there they hope to begin strategizing their plans for what to do about Wells. That begins with Cisco and Joe planning a trip to Starling City, while Caitlin continues to be adamantly against a crusade to take down Wells.

With Joe and Cisco off on a road trip, the safety of the city is left to Eddie and Barry. When a bank employee is caught on camera stealing clients safety deposit jewels, she is arrested. The woman adamantly claims innocence, which forces Eddie and Barry to consider the alternate option. There is a new meta-human in Central City. Before they can plan their next move, Iris walks into the station, still sporting a cold shoulder towards Eddie. That same day, a 911 call about stolen goods puts Barry and Eddie in the meta-humans path. Once Eddie is on scene, the meta-human bests him. Barry tries to wrap the case with an arrest, but underestimates the guy’s power. He’s a shape-shifter. He can adapt and take on anyone he touches.

The hunt for the man presents new challenges for Barry. If he were to be touched by the shape-shifter, he could potentially take on Barry’s powers. Fortunately, Wells I.D.’s the man. A search begins for Hannibal Bates. Barry and Eddie track down the woman they think is Hannibal’s grandmother. Before they can question her, she vanishes. Hannibal is actually impersonating his grandmother and with a new disguise, he makes a run for it. Eddie and Barry give chase, but Hannibal gets the upper hand when he manages to shift into Eddie’s form (and shoot two cops). This jeopardizes Eddie’s career after the police cruiser’s video camera captures his actions. The DA has to bring charges in spite of what Barry says. This brings Iris to the station in tears over this latest turn of events… 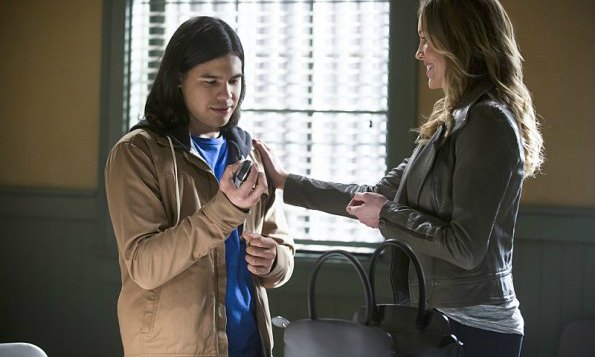 Once in Starling City, Joe and Cisco take their questions about Wells (since he used to live there) to Quentin Lance. While at the station, Laurel walks in on the conversation and Cisco meets The Black Canary. (Which of course makes Cisco hyperventilate with excitement – after all, he loves the Black Canary: “I…love you. I mean, I love the way that you beat up criminals and…wait. Why are you telling me this?”) Laurel’s reason for confiding in Cisco is a practical need; she has technologically she wants upgraded. 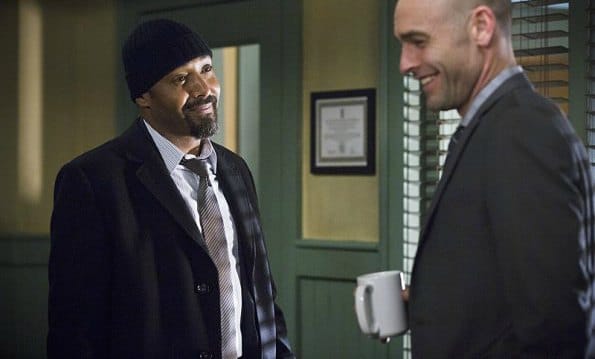 Cisco and Joe search the crash site where they hope to find proof that something more than a car wreck happened. As Cisco uses his cool gadgets to search the grounds, Joe and Lance discuss their daughters. Joe tries to offer some advice after hearing Lance and Laurel are on rocky ground because of her secret. Joe believes that sometimes people “lie for love, especially when it comes to family.” Interrupting them is Cisco’s discovery of a body buried in the ground.

Later, Joe wraps up his investigation in Starling City. Cisco excitedly returns Laurel’s modified gadget which he dubs “The Canary Cry.” As thanks, Laurel gives Cisco a photo of the two of them. But it doesn’t come without a warning: if he shows it to anyone, she’ll kill him. Cisco: “That’s just an expression, right?” Laurel: “Nope.” Even in limited screen time, these two were awfully cute together.

In the more recent episodes, the girls have been kind of… boring. None of them have really gotten a stand-out story or much time to prove what they might be capable of. Last night offered a bit more substance for Caitlin who detests the idea of investigating Wells. She pursues an investigation of her own. Afterwards, she takes a chance and visits Wells in his home. Before Wells can get to the door, Barry whisks Caitlin away before she can reveal their investigation. Caitlin feels a sense of loyalty to Wells because of his support during the nine months after the particle accelerator event. 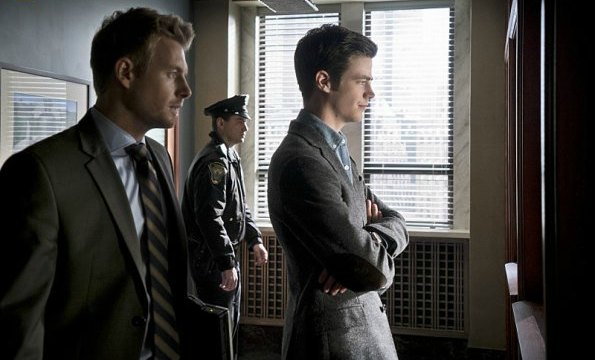 Barry makes an effort to save Eddie (how far these two have come) from prosecution (the DA discounts proof Eddie didn’t fire a weapon) by removing him from police custody. Eddie instead asks him to fix this mess the “right way.” Soon after Barry leaves him (back in police custody), Eddie shows up at Joe’s house with a story of release. But instead of Eddie, it’s Hannibal and he takes Barry’s identity with one touch.

Just as Hannibal is about to leave, Caitlin shows up with a theory she can stop Hannibal (or as she dubs him “Everyman”). Unbeknownst to her, she brings the meta-human back to S.T.A.R Labs (where he kisses her in the body of Barry, much to her later embarrassment when she discovers he’s not who he says he is). At the labs, Iris inserts herself with investigative ideas Eddie is being framed (she notices a discrepancy in Eddie’s shooting hand). Anticipating Hannibal (not Barry) is in their presence, Wells disarms him. Then Iris and Caitlin make an attempt to transfer Hannibal into police custody, but a clever ruse assists his escape. Again. Caitlin finds Barry tied up where Hannibal left him unconscious, and with a good slap across the face, he’s back.

Caitlin, Wells and Barry regroup with a new strategy to capture Hannibal. A cell ping leads them to him at the airport, where an epic battle ensues. During which Hannibal takes on the appearance of Caitlin, Iris and then Eddie. Barry uses his speed to stick Hannibal with the needle. Barry then uses the security video from the airport to clear Eddie’s name. Eddie is cleared and confesses the truth to Iris: he’s been helping the Flash. 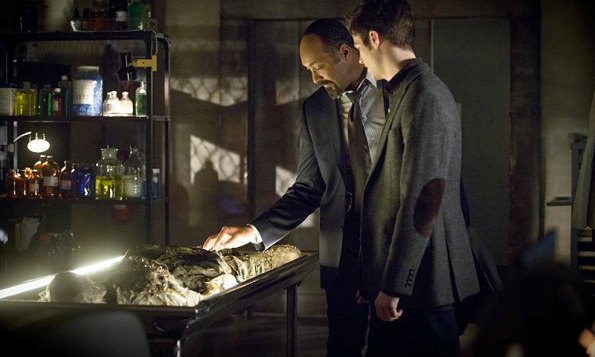 They discover that the body Cisco uncovered is really Wells. The DNA matches, so they now know Wells is not who he says he is. Back at the station, Wells and Joe exchange words where Wells asks Joe how his trip was. Wells is clearly always one step ahead of everyone else.

Later, Cisco’s 3-D model of the lab reveals Wells is hiding something. Caitlin, Barry and Cisco find Wells’ secret room, which Barry’s handprint unlocks. Inside they find the yellow suit and the 2024 newspaper image of The Flash’s mysterious vanishing act…

This episode was really quite good (those scenes with Joe and Lance were great), but I didn’t think it lived up to the promise of what its episode title suggested. There really wasn’t anything more learned about who Wells is. Instead it was more about those around him chipping away at his secrets. That being said, it was still a solid, enjoyable episode.

What (if any) ramifications do you think Eddie’s admission to Iris will yield?

The promotional spots seem to suggest Wells and Team Flash are going to be at odds. What do you think is coming up?

Join me again next week for a recap of “The Trap.”