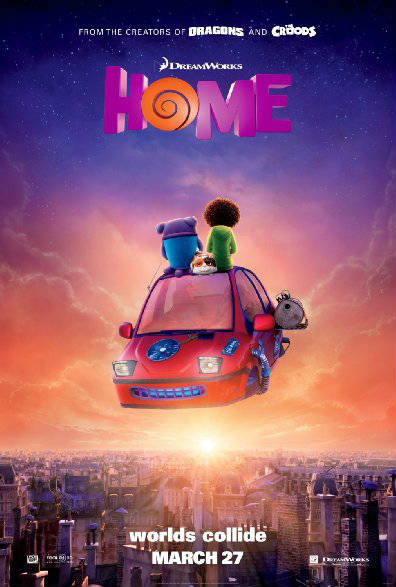 At this point, we all know DreamWorks Animation needs Home to do well. With the exception of The Croods and How To Train Your Dragon 2, their films have not been doing very well in terms of box office ever since Rise of the Guardians. They have been losing money ever since, having to close down one of their animations studios, laying off 500 animators.

Disney has no qualms about kicking their rival when they are down, putting a stop to a potential deal with Hasbro by threatening to pull off its brand licensing from the toy company should it buy DreamWorks Animation. DreamWorks desperately wants to be bought and go private as Wall Street does not have very much faith in their products. DreamWorks also pushed the release date of Home back, which shows even they don’t have much faith in their own product and the trailers for the film did not do much to represent what the film is about. The DreamWorks promotional department really needs to change their marketing techniques. Going into this film, I was not sure what to expect but I was hoping beyond hope that it would be good.

Home is about an alien race known as the Boov who come to Earth and take it over in the first ten minutes of the film. They place all the humans in camps and now Earth is theirs. We follow one particular Boov called Oh. He often makes mistakes and one of his mistakes results in him becoming a fugitive. While he ducks to escape his fellow Boovs, he meets a human girl named Gratuity “Tip” Tucci and they team up trying to find her lost mother with the looming threat of the Gorg approaching to destroy the planet.

Now the story, for the most part, is pretty typical. There is the really eccentric outcast who teams up with another character who also feels alienated and they must prove themselves. It is a basic story that appears in many animated films. Another issue I had with the film is that there were so many inconsistencies that the writers did not explain. I know this is an animated film and most animated films are perceived as “kids films” but I do not think that gives this film an excuse to not explain certain elements.

One of the best aspects of this film is the third act. It is excellent and made the first two acts looks terrible when compared to the third act. The ending was beautifully constructed and well executed. There is a scene in the third act with no dialogue. The animation and music was used to convey the emotions of the scene with affective results. It was simply lovely and I left the cinema with a smile on my face.

I can understand some people liking the humor, some people disliking the humor or, like me, have mixed feelings about the humor. Humor is very subjective after all. Some of the humor I liked such as how many of the Boov use human creations incorrectly due to not understanding their purpose or mistaking its purpose for something else. Such as using a tire as clothing or a trash can as a helmet. There were some other jokes that I did not like such as the toilet humor. Though, thankfully, it did not dominate the humor of the film.

The film also has really good messages and themes as well though I will say the writers make them quite obvious. One is about how the desire for a home and sense of belonging is universal. The film also is about the importance of empathy. The Boov genuinely think forcibly removing the inhabitants of a planet and herding them up in select areas, is dong them a huge favor just by showing up. The film tackles this line of thought through a scene of Oh and Tip having a conversation about her feelings regarding the Boov’s invasion. The film says that the greatest thing one can do to become a better person is to try to envision how one’s actions impact the lives of other people and how they would feel.

The film also has a message about not running away from your fears or your problems. The Boov as a species are the masters of running away and Oh must learn the consequences of this philosophy and what the effects are for everyone involved. Even if one might know something is 100% true, including something that involves the individual, it can still not be true. Life is a journey realizing just how wrong one can be then dealing with those realizations as gracefully and compassionately as possible. Home earns its emotional climax because it takes these ideas seriously. The characters go through real maturity and growth when they realize how wrong they could be and that, I think, is something viewers of all ages can appreciate.

Oh is very unique, friendly and always has a positive attitude. Oh’s facial expressions, gestures, and changing colors depending on his emotions and mood make him such an endearing character. Thank goodness for that because I was worried that he would be annoying. Yet, somehow he works and he is a character I enjoyed spending time with.

Gratuity “Tip” Tucci is a fully realized character; she is a bright, resourceful, smart, spunky, compassionate heroine who I think anyone can look up to. She is also realistic both in terms of body proportions and personality. This realism is demonstrated in a scene of her discussing with Oh about her feelings of being an outcast when around her peers she says, “7th grade girls are mean.” Being a 7th grade girl myself at one point, I remember how unpleasant my peers could be and I personally felt a connection with Tip. Her struggles as an immigrant from Barbados are talked about and handled well.

The relationship between Tip and Oh, though rocky at first, really grew on me as the film continued. I really felt their strong bond and connection as they spent more and more time together. I was genuinely invested and felt it was sweet, touching and frankly, adorable. Tip’s pet cat Pig is also adorable and a bundle of personality in a way only a cat can be. Tip’s mother Lucy and Oh’s fellow Boov Kyle are minor characters but they are still enjoyable. Captain Smek is the leader of the Boov and is a steady source of slapstick and visual gags. Overall, I would say the characters are entertaining and fun, though the most developed ones are the two main leads, as it should be.

The animation is wonderful, especially with the backgrounds and the great use of color and the creative and unique character designs. I really liked the unique designs, culture and technology of the Boov. I have never seen aliens done in this fashion and I also really loved how they changed color based on their emotions. The technology was interesting and had this bubble theme to it that surprisingly worked. I really appreciate how the animators were able to convey so much emotion through the characters expressions, subtle eye movements and gestures, often without dialogue. There is so much detail in this film. Such as the way Tip’s hair moves realistically in the wind and the prints of Pig’s paws on the glass of the car. The film is filled with little touches like that. I also really liked what Oh did with Tip’s car after he fixed it, making it run on slushie drinks, it is so creative and a delight to behold.

Even with the story problems, obvious messages, and mixed humor, I am still glad I saw Home. It may not be as thematically complex or emotionally mature as a Laika film but it is still an enjoyable DreamWorks film. Younger children, I imagine, will certainly enjoy Home. It is entertaining, fun and not completely bogged down by pop-culture referencing. The film has fun and likable characters, unique and creative animation, and an excellent third act. That final act was worth the price of admission and made the movie. I sincerely hope this film does well. I’m rooting for DreamWorks Animation. I adored Rise of the Guardians and Mr. Peabody & Sherman and I want to see them to continue to make their entertaining, wacky, weird, and offbeat films with diverse and varied casts.

We need to support DreamWorks Animation because they are not afraid to depict characters who do not fit modern Eurocentric definitions of beauty. They depict women and men with varying skin colors, weights, body types, body imperfections, noses, hair, and how different people are in real life. If we lose DreamWorks Animation, we will lose a unique and diverse animation studio. We will lose diversity in story-telling, body positivity, and unique stories.

Our romance-themed entertainment site is on a mission to help you find the best period dramas, romance movies, TV shows, and books. Other topics include Jane Austen, Classic Hollywood, TV Couples, Fairy Tales, Romantic Living, Romanticism, and more. We’re damsels not in distress fighting for the all-new optimistic Romantic Revolution. Join us and subscribe. For more information, see our About, Old-Fashioned Romance 101, Modern Romanticism 101, and Romantic Living 101.
Pin this article to read later! And make sure to follow us on Pinterest.
By Moriah Burbank on April 5th, 2015