Author D.A. Karr of books including the sci-fi thriller LINK, is here to take our Petticoat Personality Test and tell you all about her book as well as a little bit about herself. Read on to find out which classic first edition book she’d love to own! And keep reading for a sneak peek excerpt of LINK!

Tom Clancy. He’s quite an adventurer and a natural.

Gone with the Wind.

No. They’re computer programs written by programmers, not written words or paint strokes on canvas.

D.A. Karr has been writing books and screenplays for the last ten years. Her experience and employment includes firefighting in the U.S. Forest Service, law enforcement, IT engineering, and several years with the Space and Naval Warfare Systems Center San Diego (SSC San Diego). She has a Master’s in software engineering.

D.A. Karr enjoys writing in a variety of genres including sci-fi, thriller-mystery, historical fiction, and screenplays.  She is the author of several books including LINK, The Legend of Pendyne, and The Racehorse with Magic Shoes.

To learn more, go to http://www.racehorsewithmagicshoes.com/ 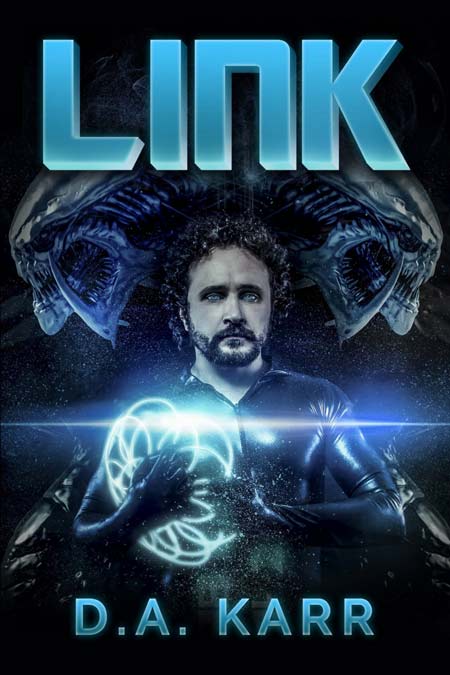 LINK, by D.A. Karr, is a sci-fi thriller set in the year 2800, in a future apocalyptic world. It is suspenseful, intriguing, and action filled. Tom Clancy and Clive Cussler fans will enjoy reading this book.

As the Earth shifts on its axis, all the continents either divided into small islands or converged into desert or ice. Humankind is caught in a war of survival and time.

Captain John Garrick of the Phoenix ship is a time enforcer at the National Space Time Enforcement Agency. He discovers that the N.S.T.E.A has sealed a deal to deliver time technology to the notorious outlaw, Menser, in exchange for Charles Ramsey, the ousted ex-president of the United Sectors.

Garrick plots to stop the deal from being carried out, and he and the Phoenix’s crew prepare for the inevitable fight.

LINK has a classic sci-fi theme of good guys versus bad guys… If you’re a fan of Battlestar Galactica, LINK definitely has some of its great panache which makes it enjoyable.

Suddenly an ear-piercing boom was heard across the desert as the Phoenix broke the sound barrier.  The golden warship pitched then dived hard to the left, circling, slowing its descent. It was pre-dawn in Mediteranea, only to be dimmed by eerie reddish-orange clouds of dust.

The Naimen territory of Mediteranea, once a thriving sea town, was barely visible through the red dust. The Mediterranean Sea disappeared when the meteor hit leaving nothing but desert turned to dust, inhabitable only to criminals and drifters.

The Phoenix lowered its thrusters slowing the massive ship, as it sunk its struts in the desert sand.  The ship shuddered slightly as her hull settled into the gravitational pull of the desert. Hidden by a vast craggy outcropping, blending into the landscape, Phoenix glowed red against the rock walls like a Chameleon letting the heat dissipate into the hot desert air.

Becker looked out the shielded windows at nothing but red dust, “Lieutenant Chiang! How bad is this dust?”

Garrick got out of his seat as Farber, Gillie, and Wexler joined him on the Command Center, “Not good at all. Maybe to our favor. Phoenix is hidden behind these rocks, then maybe we can get in and out of this hell hole unnoticed.”

Becker advised Garrick, “We can’t stay on the ground for more than four hours in this dust, before the engines choke.”

Garrick didn’t divulge his real plan, but he never went by the rules either, “I agree. If we’re lucky, this won’t take long.” Garrick’s only concern right now was Phoenix, and getting rid of Menser.

Garrick replied, “Good idea. Less chance of being recognized too.”

Becker responded, “Just take what you need. Small arms only.”

Gillie, Wexler, and Farber left the bridge to pick up their gear. Garrick turned to Becker, “What’s the distance to the city from here?”

Becker looked at the scan grids, “From this viewer, maybe one, maybe two klicks.”

Garrick looked out the shielded windows at the craggy wall hiding Phoenix, “Too close but at least we’re behind this rock.”

Suddenly, Becker grabbed Garrick’s arm unexpectedly however, for a different reason, “Garrick! I know what you’re feeling. There’s something wrong here. Really wrong. I’m giving you a direct order! Find Menser and take him out. Blow the Penteract. Understand?”

Garrick contemplated Becker expecting a different conversation, “My hair’s standing up on my neck. I’ve got a bad feeling myself.”

Becker seemed concerned, “One last thing. You’ll be out of communication with Phoenix. So you’re on your own.”

Garrick answered knowing he had his secret weapon in his pocket, “I’ve got A.L.I.S.”

Just then, Gillie, Wexler, and Farber came back dressed in desert gear with breathing masks. They had an extra robe for Garrick.  Gillie handed the breathing mask to him, “Here Cap.”

Garrick put his robe on and hung the mask around his neck, “Stay away from the Dragars. They can smell humans a mile away. They’re dangerous.”

Farber replied meekly, “I just wished your blue genie is following behind us.”

Garrick pointed towards Mediteranea, “She’ll be close enough. City is that way. Find Menser and the Penteract. Get it?”

Garrick ordered, “Link!” Then A.L.I.S. disappeared waiting for his command.

Our romance-themed entertainment site is on a mission to help you find the best period dramas, romance movies, TV shows, and books. Other topics include Jane Austen, Classic Hollywood, TV Couples, Fairy Tales, Romantic Living, Romanticism, and more. We’re damsels not in distress fighting for the all-new optimistic Romantic Revolution. Join us and subscribe. For more information, see our About, Old-Fashioned Romance 101, Modern Romanticism 101, and Romantic Living 101.
Pin this article to read later! And make sure to follow us on Pinterest.
By Amber Topping on March 30th, 2015