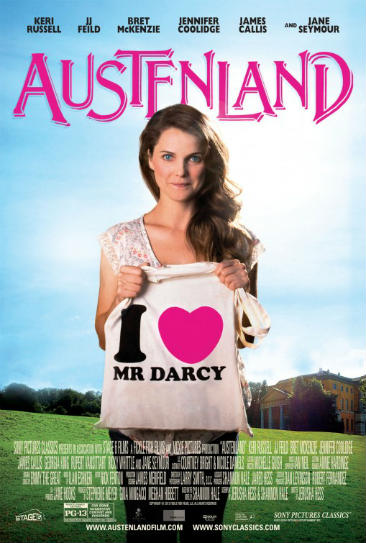 THE CLASSIC MOMENT: Nobley hops a flight to America to see Jane

As someone who admires Austen’s original stories as seen through the lens of BBC adaptations, I find myself just as enthralled by any contemporary interpretations of Austen’s works – no matter the form. The comedy Austenland is not really a reimagining of an Austen story so much as it is a story about a women obsessed with Jane Austen (her bedroom alone attests to that -it’s covered wall-to-wall with Austen paraphernalia) and Mr. Darcy whom she believes is her fantasy. She is so desirous of an Austen experience that she jumps at the chance to visit an all-exclusive vacation spot called Austenland.

Following scripted romance, Jane ends her vacation with a less-then-happy experience. She’s ready to be done with her Austen infatuation after being misled over the experience she was promised at Austenland; an experience that Jane poured her savings into. When she realizes this, it gives Jane a sense of self-purpose and empowerment. Checking in for her flight, Jane’s uncomplicated getaway soon turns into a disaster as her two almost-loves chase her to the airport. The first, Martin is an actor hired by the owner of Austenland as a stable hand. The second is Henry Nobley, the nephew of the owner. Martin (the token Wickham-like character) attempts to win her back with a great speech (not of his own volition). He tells her he’s sorry and still wishes her to stay in London to spend the “night together.” His attempts to woo her with his fake charm fix nothing. Jane retorts to his promises of romance, “You’re an actor!” Henry (in full dress costume) is next on the scene trying to win back Jane – to convince her that he has fallen for her. His attempts to convince Jane don’t end much better.

The two men get into a shoving match, and Jane attempts to get them apart without success. When they are done rolling around on the ground, Jane steps up onto a suitcase and lets her frustrations out, “Did you hear that England,” she yells, “I am officially over it!” And off she goes to make her flight. Henry follows her and gently taking her elbow tells her, “I never lied to you.”

Slowly, leaning in, Jane whispers in Nobley’s ear, “It doesn’t even matter anymore that you weren’t real. You were perfect. Thank you.”

Off she walks away and Nobley is left with a look of hurt on his face as he watches his love walk away.

Upon her return to America, having learned that fiction doesn’t deliver what it promises, Jane gets busy. She clears out her bedroom of any and all Austen decorations. She packs it into boxes – including her life-sized Colin Firth Mr. Darcy, and sets them in the living room. Calling her friend over for tea, she begins to make the tea and there’s a knock on her door. In the door walks Nobley. With her back to the door (and assuming it’s her friend), Jane asks her if she’d like a cup of tea. Nobley looks around the room, he seems both ill at ease nervous and even notices Jane’s life-size Darcy. His male voice answers Jane’s question of wanting tea, “Love a cup. Thank you.” Jane spins around surprised to see Nobley in her tiny kitchen space.

“What are you doing here?” she asks.

“Well, you left this,” he hands Jane the sketchbook she was rarely without while at Austenland.

“Thanks… you could’ve mailed it,” Jane replies with a small smile of uncertainty.

Seeming to come to his senses, Nobley take Jane’s words as a dismissive gesture and says, “I… could have. You’re right.” A look of embarrassment passes his face as his logical side kicks in and Nobley realizes that Jane seems to want nothing to do with him. “What was I thinking?” he asks aloud and with a shake of his head, he turns to leave.

Confused herself, Jane looks down at her sketchbook and realizes that she’s letting Nobley walk away. Then she runs after him and calls out, “Wait a minute. You know I’m not going to report your aunt, so it was a little overkill to send you.”

Again, jaded against what she thought was her fantasy, with a smidgen of sarcasm, Jane says, “Mr. Nobley – or whoever you actually are…”

“I used to think my aunt’s profession was somewhat grotesque. But the truth is, I enjoyed stepping into history. The idea of a simpler world where love is straightforward and lasting… I believe we have that in common.” At this point, keeping eye contact with Jane, Henry moves closer to Jane, who backs a step away from him. He tells her, “But all of this is secondary to the fact that I am completely mad about you.”

Jane’s reaction is still one of disbelief – Henry’s genuine confessions haven’t won her over and she continues to put him off as she stumbles through a reply, “All right. Well you may have been mad about Miss Erstwhile, but you… you don’t even know me. I…” she indicates her small apartment with its decorations more suited to a young teenager’s room than a successful, grown woman’s.

“You are Miss Erstwhile. I saw you in the theatrical. You were Horrifying.”

This clicks with Jane and she responds with a bit of indignation and flirty banter, “Whoa. Wait a minute. You were horrifying. I was… I wasn’t great.”

With a smile and a look of tenderness, Nobley sincerely responds with affection in his voice, “My point exactly. Neither one of us are capable of pretending.”

Not about to be deterred, Nobley tries again to convince Jane he’s not a figment of her imagination: “The night of the ball you said you wanted something real. I’d like to think I am real.” Moving closer yet, he then asks, “Is it possible that someone like me can make you happy? Will you let me try?”

Neither one of them speaks; they stand there a breath away from each other. Jane’s longing look suggests she’s teetering on the edge of believing Nobley. They slowing lean in towards each other. Nobley slowly leans in to kiss her and then Jane speaks, “No. See, people don’t do this. This is my fantasy, this isn’t…” and she walks away.

Henry follows, “Have you stopped to consider that you might have this all backward?” He cups her face gently with his hands and with conviction and a face full of love, Nobley confesses, “Jane… you are my fantasy.”

When she doesn’t pull away, Nobley smiles, leans in and sweetly kisses Jane. They break apart and with a happy look on her face, Jane finally is convinced that this moment is anything but a scripted scene.“Tally-Ho,” she happily exclaims. Smiling at her reaction, they both lean in again and kiss. Jane puts her arms around Nobley’s neck, stands on her tiptoes and an unspoken acceptance of his love seems to be sealed with their kisses. Jane has met and found her fantasy with her very own Mr. Darcy.

Did you like Austenland? What about this ending? I honestly think it’s one of the best, most sincere and sweet romantic comedy endings I’ve seen.