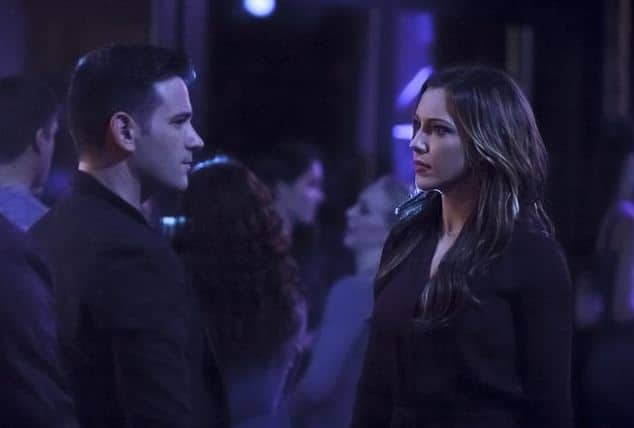 While last week was one of my least favorite episodes, “The Return” was quite the opposite. Usually, the flashbacks can get a little dull for me at times, so when I heard tonight’s episode was the one a season devoted mainly to the past, I wasn’t really looking forward to it. But this season’s “Island” episode wasn’t going to take place on the island or China. Instead, it was all about Oliver’s original return to Starling City, a return he had to keep secret from his friends and family. What took place was like a nostalgic trip back to season one and I loved it. 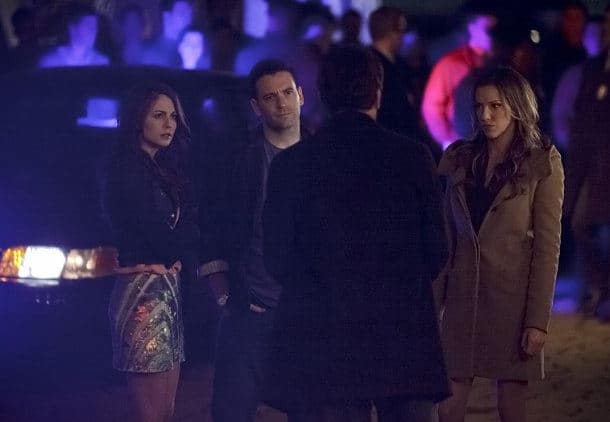 Turns out the only reason Oliver and Maseo were still alive (after their attempted escape), was because of Oliver’s Starling City knowledge (the place China White was going to buy a dangerous weapon). Oliver also needed to get into Queen Consolidated without being seen (he’s supposed to be dead after all). But keeping his distance proves harder than expected. At the first sight of Thea, Oliver is awestruck. He follows her to his “grave.” Unfortunately, Thea went there to meet a drug dealer. On the bright side, Tommy shows up to tell the guy to take a hike. He then tells her, she’s “not” invited to his “21 and over” party. Well, we knew Thea would go anyway. Still, I miss Tommy.

Later, Oliver breaks into Queen Consolidated to gain information about an employee with connections to China White and an Omega bioweapon. While he downloads files, Oliver finds one from his father at the same time. He also witnesses an awkward girl with glasses calling him “cute” (but more on that later).

Aside from Oliver in the past, we see Diggle with his brother Andy. It’s nice to see their closeness (including Andy telling Diggle he was stupid for divorcing Lyla). Hopefully, we get a flashback episode devoted to the two brothers.

At Tommy’s party, Oliver shows up wearing a hoodie so no one sees him, and observes everything that goes down: Laurel and Tommy talk, Tommy isn’t too happy when Thea shows up, and then there is that drug dealer again. Thea buys some more drugs, but afterwards Oliver will have none of that: first telling the guy to stay away and then coldly killing him once he’s recognized as dead Oliver Queen.

Of course the cops show up (including Quentin and his old partner), Detective Lance drunk. He’s upset to see Laurel hanging out with another loser billionaire. After Sara’s death, he doesn’t get why she hasn’t learned her lesson. He’s also upset about her giving up on saving the world with her new corporate job…

Maseo then turns up with a gun to Oliver’s back (Oliver sort of went AWOL), but Oliver doesn’t want to go. He doesn’t care about stopping the bioweapon; he only cares about helping those closest to him, especially seeing firsthand the mess he’s made in being dead. But then Oliver watches a video recording his father left for him, a video about making the right choices, a video that tells Oliver he can save the city. Knowing that the bioweapon could potentially kill a lot of people, Oliver arrives just in time to save the day (and Maseo), taking down China White in the process. Unfortunately, his heroics don’t end his servitude to A.R.G.U.S. Instead, General Matthew Shrieve arrives to tell Oliver that they need him to debrief in Hong Kong and then Oliver can go anywhere he likes (somehow I doubt it).

Meanwhile, Tommy crosses paths with Laurel coming out of her new job at CNRI, Laurel deciding to help save the world (or Starling City) rather than go to San Francisco. Tommy then adorably asks Laurel out to dinner. 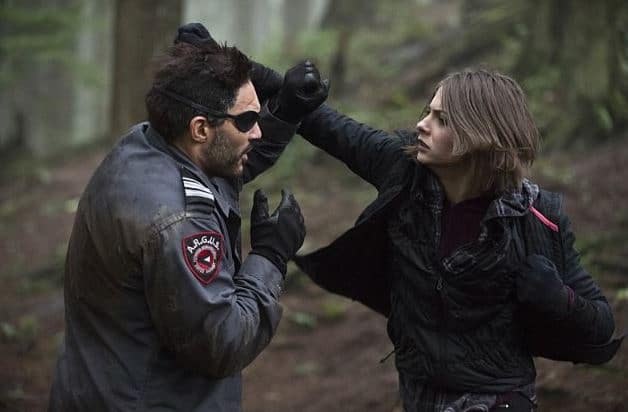 In the present day, Thea and Oliver are training on the island, when Oliver realizes Slade had escaped his prison cell. That could mean only one thing: everyone he loved was once more in danger. Oliver and Thea had to get off that island and fast. Too bad Malcolm set up the whole thing in order for Oliver to gain back his killer instinct…

Soon, Slade attacks and wins the first battle, placing Thea and Oliver in what used to be his prison cell. He still wants Oliver to pay for Shado, for “killing” the woman he loved. On a side note, it irks me that Slade’s demeanor still hasn’t changed over all this time. He was a good man before Mirakuru. Why can’t he become one again? Given enough distance from the drug, I hoped Slade could seek redemption for his choices, become saner once off Mirakuru. It’s a pity the writers didn’t make this choice as I think it makes more logical sense. Rant over.

Slade then leaves Thea and Oliver to rot in prison (like Oliver did to him) while he makes it back to their plane to escape. After a conversation about truth (since Slade planted some seeds into Thea’s mind about Oliver’s secrets), the two siblings find a way to escape. Luckily for them, the prison was meant for grown men and Thea is pretty small…All Oliver has to do is dislocate her shoulder so she can press the open button. Ouch.

Once free, the two run for the plane, but it’s not long before Thea breaks and demands the truth about Sara. Finally, Oliver tells Thea that Malcolm killed Sara by using her to do his dirty work. Knowing that she is a killer, when they again face off against Slade, she has a lot of rage. The three fight it out, until finally Oliver and Thea overtake him. Thea holds up a gun, but Oliver tells her not to shoot, that she’s not a killer. She just gives Slade a battle wound, the two siblings returning Slade to his prison cell.

There, Slade remarks that Thea has been touched by darkness, snidely pointing out that Oliver has lost his father, his mother, and now his sister, but what about that girl with glasses? How long before Oliver loses everything and loses being Oliver Queen? Oliver really needs to take note of this and fight for Felicity. Seriously! He’s done enough hiding behind a mask as Laurel pointed out last week. 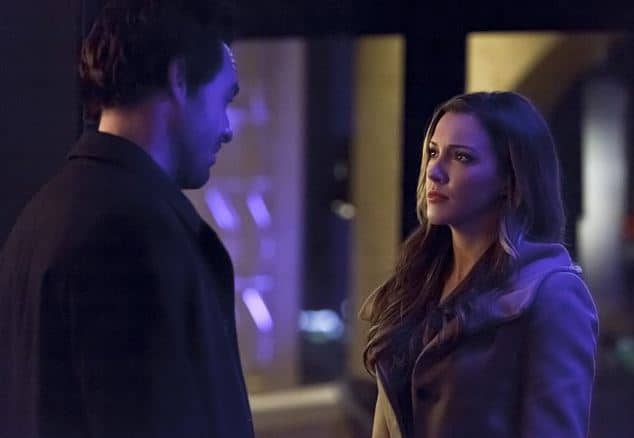 Love was not in the air between our two father/daughter relationships on the show. After Thea realized Malcolm turned her into a killer and had her kill a close friend, Thea wants nothing to do with her “sick” father. But because they need him to defeat Ra’s, she will work with him but never be his daughter ever again. Malcolm looks ticked at Oliver for telling Thea the truth, but I can’t say the man didn’t deserve it.

Then there is Quentin Lance and his daughter Laurel. While Quentin was an alcoholic in the past (and said some rotten things to Laurel after she attempts to take a corporate job in San Francisco), he still had a strong bond with Laurel. They were still a duo. Then, the present day happened. At Sara’s grave, Quentin admits he’s not upset about Laurel becoming the black canary (yes, he said “black”), he’s upset because she betrayed him. Laurel didn’t let him grieve. Tempted to pick up a drink, Laurel says that they can go to a meeting. He agrees, but to different meetings. Ouch. I get the feeling things will be icy between the two for a while.

So, there wasn’t much romantic in this episode (except I have to admit I kind of loved seeing Tommy ask Laurel out because I love these two together), but I would be remiss without bringing up the adorable Felicity Smoak scene at Queen Consolidated. While I’m slightly confused about her timeline (when did Felicity start working at Queen Consolidated again?), I loved seeing past Felicity walking the halls at night, checking computers.

Oliver hides as he watches this strange girl talk to herself. She looks at Oliver’s picture, and can’t help but say aloud, “You’re cute. It’s too bad you’re, you know, dead.” 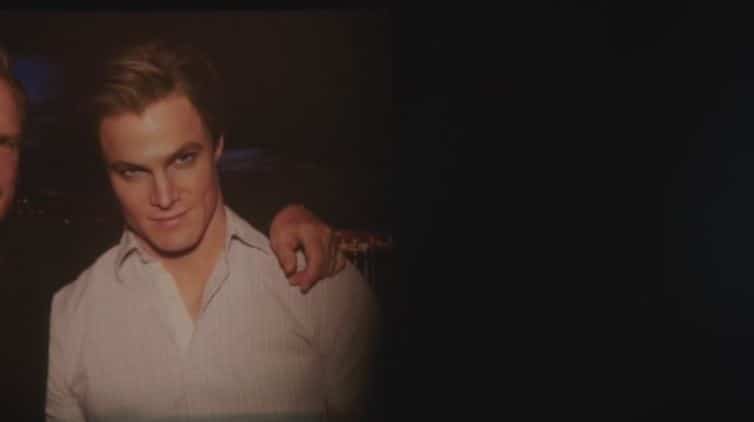 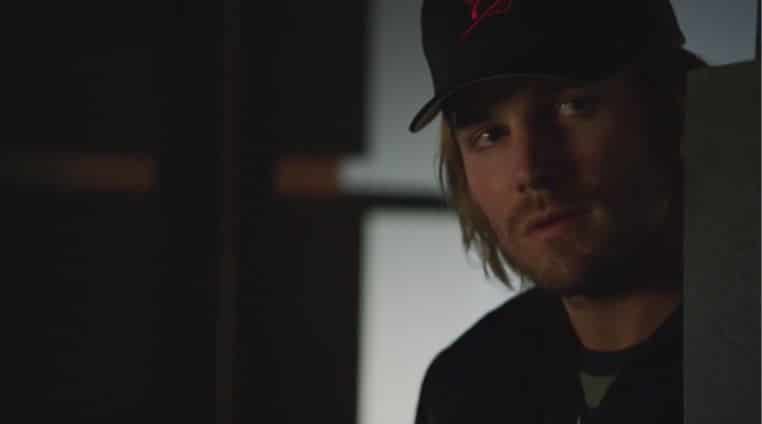 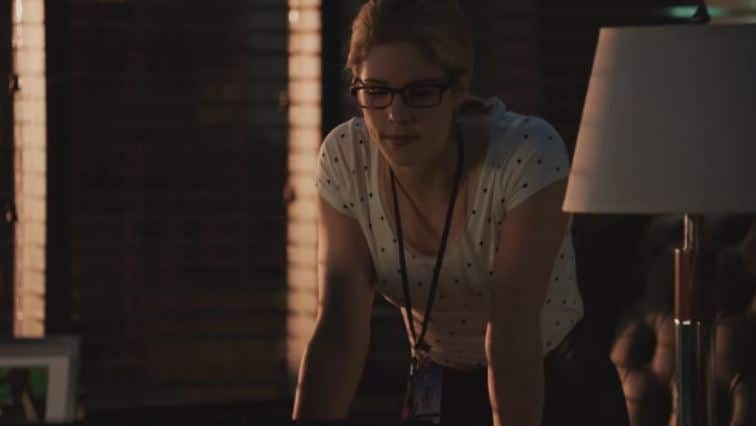 Oliver observes in interest, smiling after Felicity’s awkward declaration: “I really need to learn to stop talking to myself.” 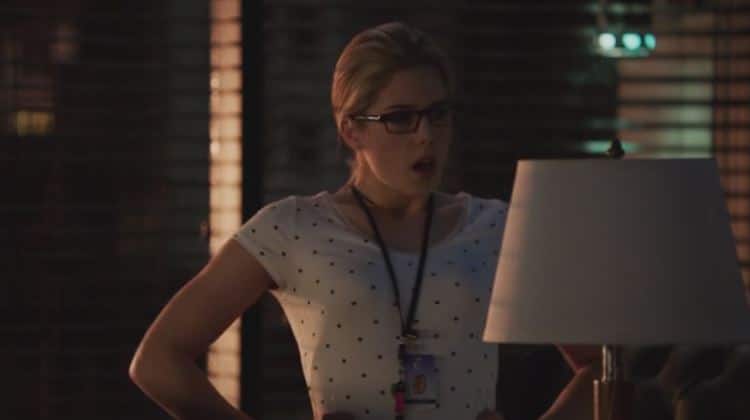 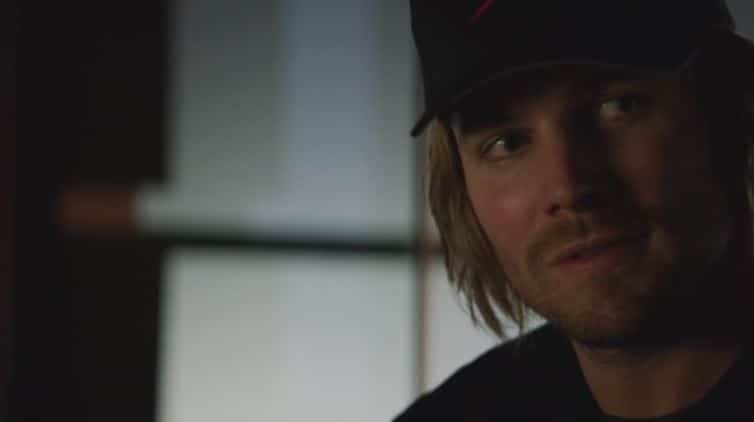 He then watches as Felicity walks away. 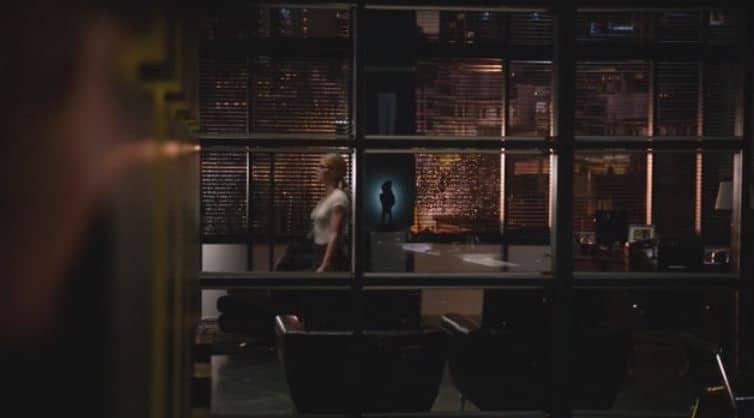 This brief moment really puts Oliver and Felicity’s first scene together into a new sort of context: why did he choose Felicity to help him again? 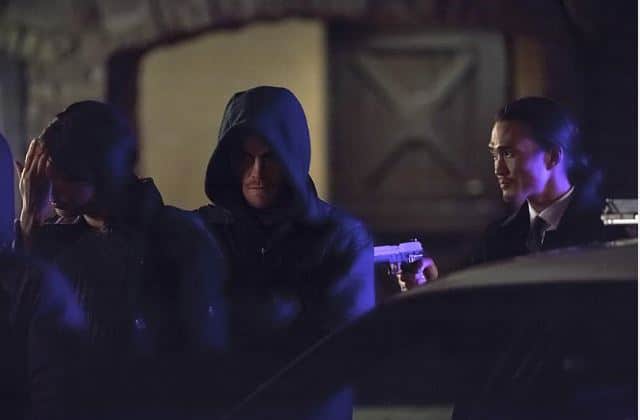 Oliver: Yeah, I pulled the hoodie down to cover my face.

Maseo: That disguise wouldn’t work even if you smeared grease paint all over your face.

What did you think of “The Return?” Did you wish Moira had returned (I did)? Love Felicity and Oliver’s short scene? Sounds off in the comments…