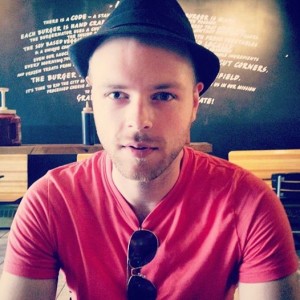 Toronto filmmaker Michael Lippert, the talent behind the new comedy PURPLE SQUIRRELS, is here today to take our “Petticoat Personality Test” and tell us a little bit about himself and his latest project. Read on to find out what movie romance makes him swoon! And don’t forget to take the time to learn more about PURPLE SQUIRRELS!

What’s a movie that inspires you?

La Dolce Vita. It’s so happy and sad and funny and painful and innocent and bitter and hopeful and cynical and earnest and sarcastic and sweet and rebellious and stylish and spiritual and fuck it, let’s eat.

What was any movie you found yourself going to the theatre to see on numerous occasions?

2001:A Space Odyssey. That’s one of the ones that you haven’t really seen unless you’ve seen it in a theatre. It just doesn’t make sense on anything smaller than what it was intended for.

Nothing, I’m filling this out.

High School Musical 3 and Bat Out of Hell 2: Back Into Hell

If you could be any animal what would you be and why?

Bird. Fly anywhere. Look down on everything. Sounds good to me. If I’m going to be one, might as well be an Eagle.

What is an example to you of a great female character?

Melissa from Purple Squirrels. She’s smart, funny, edgy, doesn’t have a filter, hot, smart enough to use it to her advantage, and could have any man but doesn’t want any of them. And that’s just the first episode.

Are there any writers that influence you?

What movie romance makes you swoon?

Nothing beats Richard Gere coming into the factory to get Debra Winger in An Officer and a Gentleman.

Has there ever been an ending to a story you wish you could rewrite?

I’d change the shot at the end of Taxi Driver so that you can’t see if it’s actually Cybill Shepherd getting out of the cab.

Anything can be considered art if you make a good enough argument for it.

Alongside his full-time job as a HR Specialist, Michael Lippert is a Toronto-based Filmmaker and Recruitment blogger. His works include the short film The Girl With The Flower (https://www.youtube.com/watch?v=6bLCmlcKHO4), the new Canadian Dramedy Purple Squirrels (https://www.youtube.com/watch?v=FWsCHH9Ee38) and industry blog Notes From the Recruitment Desk (http://www.notesfromtherecruitmentdesk.blogspot.ca).

Mixing the coming-of-age-in-the-city dramedy of Girls with the corporate satire of Office Space, Purple Squirrels is a brand new half-hour comedy show. It tracks the trails and tribulations of three recent grads who get their first big break as Recruiters in a downtown Toronto staffing agency, selling the most unpredictable commodity of them all: People.

The half-hour pilot episode First Day/Last Day, was shot on location at a real Recruitment Agency in Toronto over a weekend. It premiered on October 18th2014 for one night only at Big Picture Cinema in Toronto. It can be streamed free here (http://www.purplesquirrels.ca/promotional-material-and-video). We are currently in the process of securing funds for Episode 2, Interview to a Kill. Anyone wishing to contribute can do so here (http://www.purplesquirrels.ca/episode-two-funding)

Our romance-themed entertainment site is on a mission to help you find the best period dramas, romance movies, TV shows, and books. Other topics include Jane Austen, Classic Hollywood, TV Couples, Fairy Tales, Romantic Living, Romanticism, and more. We’re damsels not in distress fighting for the all-new optimistic Romantic Revolution. Join us and subscribe. For more information, see our About, Old-Fashioned Romance 101, Modern Romanticism 101, and Romantic Living 101.
Pin this article to read later! And make sure to follow us on Pinterest.
By Amber Topping on February 16th, 2015