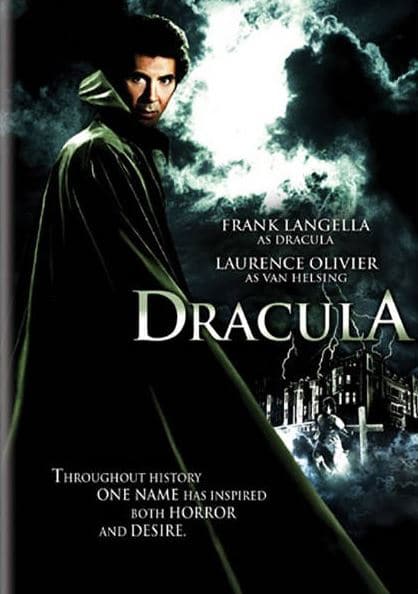 There have been numerous adaptations of Bram Stoker’s Dracula, so it goes without saying that I haven’t had time to see every interpretation of the iconic bloodsucking monster. This includes, for me, the well-known 1979 film starring Frank Lagella. For some reason, I pictured a cheesy 70’s TV movie and never sought it out. Recently, in all my vampire research for other articles on The Silver Petticoat Review, Lagella’s Dracula (1979) kept coming up. Soon I realized that not only was this Dracula not a TV movie, but it also starred the legendary classic actor Laurence Olivier as Van Helsing. Now I was intrigued; now I knew I had to see it. But did it live up to my new or old expectations?

With Gothic imagery and scenery in the style of a Bronte novel, the film is quite the visual masterpiece. John Badham as director created a work of art, each shot purposeful, creating the perfect eerie atmosphere, an atmosphere worthy of this frightening creature of the night. While some may argue that this isn’t Stoker’s Dracula (most movies about the iconic monster aren’t anyway), it doesn’t matter because the re-vamping of the plot works as its own mesmerizing entity. Right from the start, Lagella’s charisma as Count Dracula meshed with Badham’s Romantic, Brontean style captured my interest. My eyes were glued to the screen because there was something just so fascinating about this re-telling of the famous novel.

While most versions now seem like they are retreading old territory, this Dracula (even though it came out in 1979) felt refreshing and new. And for those who prefer the horrific, terrifying monsters of old, you won’t be disappointed. One of the most surprising elements for me was just how creepy and frightening this film could be at times. When Dracula scales walls, it gave me chills. Lagella’s performance is also very devil like, with a seductive persona that scares and intrigues. One can easily understand why many could fall under his evil, yet tempting spell.

For those who love the more romantic vampire figure, there is much to love here as well. In most modern adaptations of Dracula (perhaps Coppola did it first), Mina plays out as more than just Dracula’s victim but a love interest for the creature as well. While the two are telepathically linked in the classic book, new interpretations take that relationship further in interesting ways. Here, however, Mina does not play out as Dracula’s great love. Instead, Mina’s role is reversed (though Mina also plays Helsing’s daughter) with the character of Lucy. For instance, Lucy is the one engaged to Jonathan Harker. It is an odd choice, but it is a choice that works. Dracula, while villainous in every way, can’t help but be compelled by the strength of Lucy. He’s drawn to her just as she is drawn to Dracula’s darkness. He will do anything to be with her, the selfish romance between the two both sinister and captivating. A part of you wants the two to have a happy ending because the chemistry is so evident between the characters.

Aside from the romance, the performances from all the players work fabulously. From Renfield, Mina, Lucy, Harker, to Dracula, one of the biggest stand outs clearly falls to the great Laurence Olivier. While his accent isn’t flawless, it doesn’t matter because his magnetic presence when he stands against Dracula is menacing. I believe he is a true foe to the monster. Truthfully, it was a real treat to see this legend of Gothic romance in film (Wuthering Heights and Rebecca) play the part of Professor Van Helsing.

As a whole, the film really is wonderfully done and is also very beautifully shot (I love the grayish tones), yet I do have a couple of misgivings. First of all, there is one violent image in the movie I found completely unnecessary and should have been cut. When Mina awakes from the dead as a vampire, she breaks into the asylum and drains the blood of an infant. Showing us the image of this infant was a disturbing, ghastly choice to make. I didn’t need to see it at all and the image churned my stomach. Sometimes, what you don’t see works so much more than what you do see.

My other misgiving comes down to a scene of uncomfortable misogyny (probably accidental…). After the film closed, I didn’t know what to make of the message the film was making, either for good or bad. All I know is that something didn’t sit right. Let me paint a picture… A large part of the film follows Lucy’s attraction and desire for Dracula who she decides she wants to be with forever because he brings excitement and passion into her life. When Dracula starts giving Lucy his blood to turn her, the three men (her father, fiancée, and Van Helsing) lock her up in her room. I get that they are just trying to save her (and Lucy really did need to be saved from becoming an undead monster), but the presentation of this dilemma just felt wrong.

When Lucy escapes, she attempts to flee towards the Count’s home, only for the three men to capture and literally hold her down. This holding of her down felt too much like it was only the men that could protect this “weak” girl from her own silly desires. The symbolism, while I think meant to be in a good place, came off as almost abusive and sexist. After her capture, she is then locked up in an asylum. Needless to say, a couple of weeks later and I still don’t know what to make of it…

CONTENT NOTE: This is Rated R with some sensuality and violence, but not explicit at all. Overall, this feels more PG-13 to me, and was released before the PG-13 rating.

Check out more of our Vintage Reviews and Film Reviews

Don’t miss: Who is Your Vampire Soulmate? Take Our New Quiz

Our romance-themed entertainment site is on a mission to help you find the best period dramas, romance movies, TV shows, and books. Other topics include Jane Austen, Classic Hollywood, TV Couples, Fairy Tales, Romantic Living, Romanticism, and more. We’re damsels not in distress fighting for the all-new optimistic Romantic Revolution. Join us and subscribe. For more information, see our About, Old-Fashioned Romance 101, Modern Romanticism 101, and Romantic Living 101.
Pin this article to read later! And make sure to follow us on Pinterest.
By Autumn Topping on December 5th, 2014