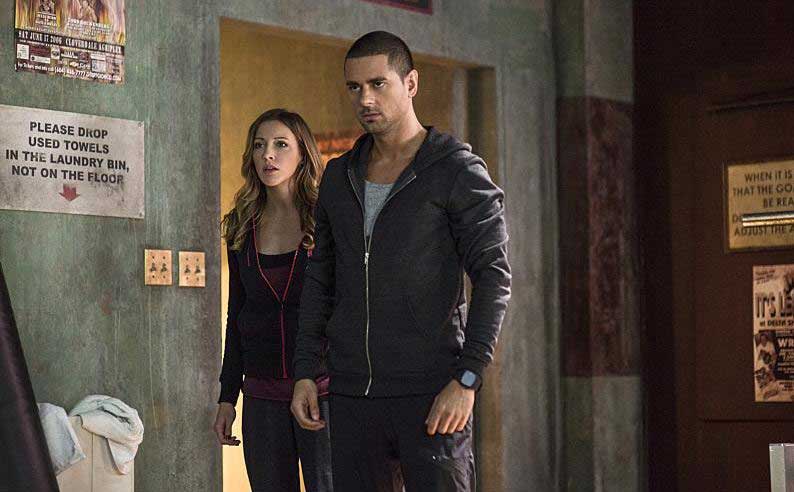 The trajectory of Laurel’s destiny as Black Canary is in full swing this week (appropriate since they just released those cool promo pictures of Laurel in her soon to be Canary costume), but that doesn’t mean it’s an easy journey for our-would- be vigilante. Thankfully, for Laurel that is, her trainer Ted Grant used to be a vigilante as well. Unfortunately for Ted Grant however, someone is framing him for a string of vigilante murders, but who would do such a thing? This week’s flashbacks were all about memory. As Oliver and Maseo attempt to ascertain an important envelope from a perp pertaining to the whereabouts of Chien Na Wei, their perp gets hit by a car while running away from Oliver. Sometime during the chase, he hid the envelope, but where did he hide it? It seems ‘where’ is hidden in Oliver’s memory.  With the help of Maseo’s wife Tatsu (who hates Oliver and just wants to get rid of him), Oliver remembers where the envelope was thanks to meditation, a technique that becomes useful later on in the episode… 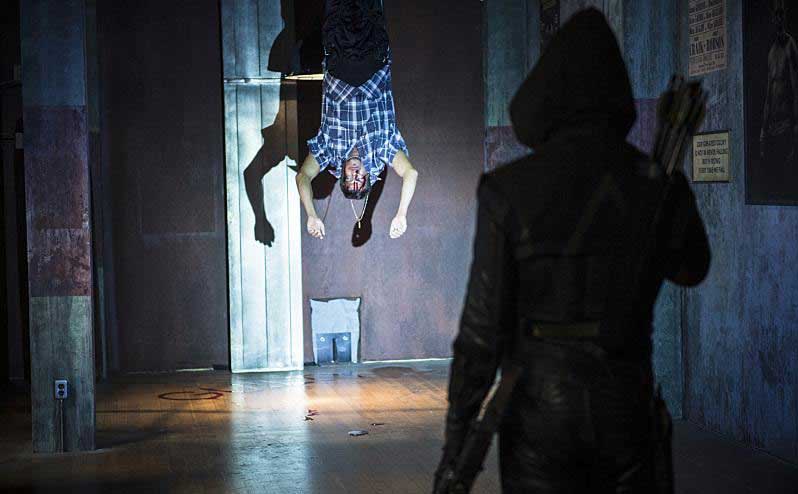 During an attempted heroin bust, Team Arrow crosses paths with some vigilante justice other than their own, but this time there’s murder involved. Someone is killing criminals and painting the word guilty near their bodies. Everything points to Laurel’s trainer Ted Grant when one of the bodies ends up in his gym. Laurel proclaims his innocence as she was having dinner with him (later on her father even quips that Laurel really knows how to pick them).

Oliver doesn’t trust Ted even though Laurel does, and tracks Ted to another hanging dead body. Oliver and Ted fight it out until Ted convinces Oliver he’s being set up. They work together, with Laurel, to find the real killer. When Oliver and Ted face the real vigilante, Oliver realizes Ted knows who the killer is. Once arrested, Ted tells Laurel who it is and why he didn’t want to say anything. Turns out, Ted used to be a vigilante, but a vigilante that didn’t kill. Not only that, but he had a partner, a partner that did kill someone six years back (making Oliver’s hypocritical tirades earlier even more laughable since Ted isn’t even a killer at all). Ted abandoned his partner and now his partner wants revenge.

With one last attempt at revenge, Ted’s old protégé kidnaps Ted and Laurel. Laurel smartly calls Felicity (the go to when kidnapping is involved). Felicity puts her on speakerphone and then Diggle and Oliver take off to rescue them.  Oliver arrives on motorcycle, but gets taken down. Thankfully, Roy arrives to help. Laurel, Ted, and Isaac (the vigilante) get in an accident. As Oliver and Diggle help Ted and Laurel, Roy stops Isaac with some nice moves.

But that’s not the end of the episode’s vigilante justice, “Guilty” ending on a cliffhanger with a completely different kind of vigilante: one obsessed with Oliver.  Her name is Cupid, and Cupid means business, killing the vigilante Isaac. The sin is always greater in others after all… Because Ted Grant and the Arrow cross paths, Oliver finally realizes that Laurel has continued training after he told her not to. He is kind of bossy. Oliver even attempts to convince Ted to stop training Laurel because it’s bad for her; Ted saying that Laurel makes her own choices. Yes, she does, though Oliver isn’t wrong about Laurel not realizing how difficult the path she’s chosen is going to become. After the ordeal is over, Laurel asks Ted to train her as a vigilante. She wants help avenging her sister’s death, but does Ted know Laurel wants to kill Sara’s killer? It’s unclear, considering how against murder he seemed throughout the entire episode. Only time will tell. As for now, I’m really enjoying Ted and Laurel’s interactions. They seem like a great match. Elsewhere in the episode, Roy admits to Felicity about his dreams (I loved seeing these two work together). He thinks he might be Sara’s killer, but is there any proof? Felicity runs some forensics, and while the evidence is inconclusive (including there being no Mirakuru in his blood), the story of how Roy killed Sara, matches with how Sara died. With this new evidence in hand, Roy then confesses to all of Team Arrow (including a present Laurel) that he thinks he’s Sara’s killer.

The team doesn’t take it well (Laurel not knowing how to react at all, considering the murder wouldn’t even be Roy’s fault), and Roy takes off for the moment. In a surprising reaction from Diggle, he tells Oliver that they should abandon Roy, release him from the group because Sara needs justice. Seeing how Ted’s own protégé became a killer once abandoned, Oliver decides to not let Roy go; instead, he decides to stick by his tortured sidekick.

After Roy arrives to save the day, Oliver brings him back to the foundry to use the same meditation technique that Tatsu taught him years back. As his memories return, Roy realizes he didn’t kill Sara that in fact his memories were trying to remind him of the cop he killed back when he was under the Mirakuru influence. Big sigh of relief for everyone I’m sure! Still, Roy is understandably upset that he is a killer.

But is this all a red herring? Could Roy in fact still be the killer? Or perhaps a witness? How did Roy know what Sara’s final words were? Could Oliver be letting Roy believe he didn’t kill Sara, while he secretly researches what really happened?

In Oliver’s flashback in Hong Kong, they mention the “art of concealing a message within another message. In this case, an image.” Could a concealed message be inside of Roy’s memory, another type of “image?”

In any case, there’s some weird stuff going on in this episode in connection to Roy.

Standout Romantic Moment of the Week With no Oliver and Felicity build up this week, the focus turned to Oliver and Laurel instead. While most of their interaction focused on their bickering, that doesn’t mean that there wasn’t a romantic moment thrown into the mix. Sure, the vibe really wasn’t about their passionate love for one another (as I really get the sense Oliver has moved on), but that doesn’t mean they don’t love each other as friends. Oliver will still do anything to protect Laurel. When Laurel is taken captive alongside Ted and his former vigilante partner, they get into an accident. Knocked out, Oliver carries Laurel away from danger just as the car blows up. I admit I have a real weakness for this kind of scene…Call me a romantic sap. 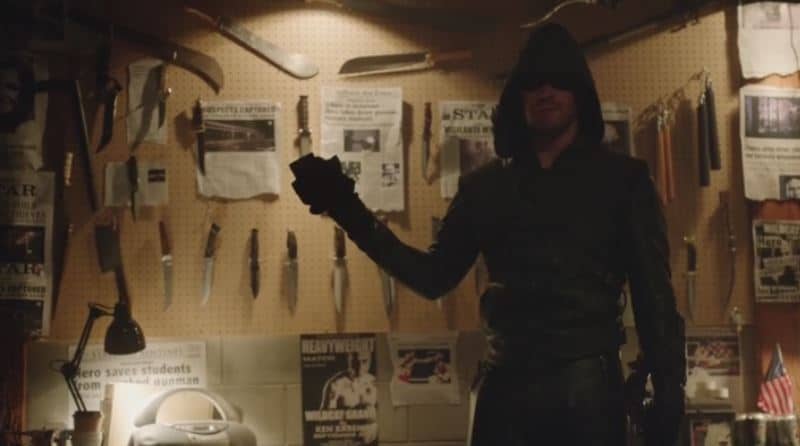 While Roy is supposedly no longer the killer, how did he dream Sara’s exact words before she died? This was kind of a weird edit to be honest. Also, since forensics suggests possible Mirakuru involvement, could Slade secretly be back? Malcolm did mention the prison in an earlier episode…

Was anyone else uncomfortable with how easily Diggle was ready to abandon Roy? It’s not like it would have been his fault if true. I’m not sure I saw this as being in character, though it did work to further the theme of the consequences of abandonment. Thoughts?

Did anyone think Laurel wasn’t the brightest when she told Ted that she and the Arrow used to date? Figuring out the truth would only take a little research to uncover that identity…

What did you think of Guilty? Sound off in the comments.

Stay tuned for next week when I recap “Draw Back Your Bow.”