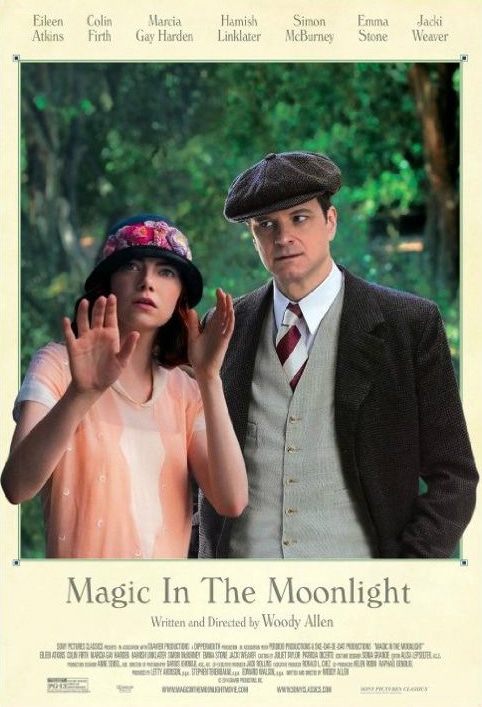 Film: Magic in the Moonlight

Written and Directed by: Woody Allen

Magic in the Moonlight is a film that both delights and entertains. If taken too seriously, this movie could be seen as a silly and even a little preachy (scientific reason vs. faith) comedic romp, but I don’t think the intent of this film was ever meant to be anything but romantic fun. If you enjoy lighter fare reminiscent of the classic romantic comedies of the golden age of cinema, or even a good romantic costume drama, then this movie might be right up your alley. Especially for any diehard Colin Firth fans.

Magic in the Moonlight tells the story of renowned magician Stanley Crawford (Colin Firth) in the 1920s who goes by the stage name Wei Ling Soo. Outside of his stage persona, he’s an arrogant cynic who believes in only rational science, priding himself in proving all spiritualists as phonies. The story takes full swing when his old friend Howard convinces Stanley to join him in the Côte d’Azur to prove that the spiritualist Sophie Baker (Emma Stone) is a fake, who he feels is taking advantage of his good friends the Catledge family. Crawford then goes undercover to the estate pretending to be a businessman, but as Sophie’s abilities become harder to disprove, Stanley soon falls under her spell, despite himself.

The best part of the film is easily the performance given by Colin Firth. With Woody Allen’s fast dialogue (again reminiscent of 1940s screwball romantic comedies), Colin Firth had to memorize so many lines I almost felt exhausted for him. Yet I loved every second. Plus, he was able to once again step into the role of romantic leading man (with a grumpy outward appearance) in a period drama reminding the audience of why he charmed everyone with his breakthrough performance in 1995’s Pride and Prejudice in the first place.

This is Colin Firth at his Mr. Darcy best. Woody Allen must have had Colin Firth in mind for this role from the start of the first draft. No one else could have pulled it off with as much curmudgeonly charm.

This is Colin Firth at his Mr. Darcy best. Woody Allen must have had Colin Firth in mind for this role from the start of the first draft. No one else could have pulled it off with as much curmudgeonly charm.

What of the chemistry then between Colin Firth and the much younger Emma Stone? One of the complaints surrounding this film is the age difference between the two actors. But is it really any different than many classic films that paired older actors with younger women? Think Humphrey Bogart and Lauren Bacall or even Audrey Hepburn. This is not something new. And since this film is purposely paying homage to a bygone era, the pairing actually works, even if the chemistry doesn’t quite sizzle. Besides, it’s Colin Firth and Colin Firth is never creepy. Sure, there are moments when you’re sitting there thinking that the age difference is a little strange, but both are so charming in the roles that I just decided not to care. I smiled from start to finish as did everyone else in the theater.

But it’s not only Colin Firth and Emma Stone alone that shine in this film. Eileen Atkins as Stanley’s Aunt Vanessa is comedic gold. She steals every scene she’s in giving a fun, memorable performance of an older woman who just wants her nephew to be happy. The rest of the supporting players including Marcia Gay Harden as Sophie’s opportunist mother also fit into their roles well. Though I think with another draft or two of the script, all of the supporting characters could have been fleshed out more.

In all, is the magic in Magic in the Moonlight hard to figure out? Not particularly. But it’s so entertaining I didn’t really care. It was fun and charming to watch with beautiful scenery and stunning costumes. I could easily watch this film again and again.

If you’re a fan of Woody Allen’s Scoop (which I loved and found hilarious), then this movie might be for you. Not to mention, if you’re a big fan of Colin Firth as Mr. Darcy then Magic in the Moonlight is a must see – if only for the 5 minute sequence (give or take) of Colin Firth stepping into his Darcy shoes to propose in exaggerated fashion expressing his supposed feelings of love and disdain that will make any Pride and Prejudice fan swoon from the obvious homage.

Have you seen Magic in the Moonlight? What did you think? Sound off in the comments!

Our romance-themed entertainment site is on a mission to help you find the best period dramas, romance movies, TV shows, and books. Other topics include Jane Austen, Classic Hollywood, TV Couples, Fairy Tales, Romantic Living, Romanticism, and more. We’re damsels not in distress fighting for the all-new optimistic Romantic Revolution. Join us and subscribe. For more information, see our About, Old-Fashioned Romance 101, Modern Romanticism 101, and Romantic Living 101.
Pin this article to read later! And make sure to follow us on Pinterest.
By Amber Topping on October 6th, 2014

5 thoughts on “Magic in the Moonlight Film Review: Colin Firth at his Mr. Darcy Best”