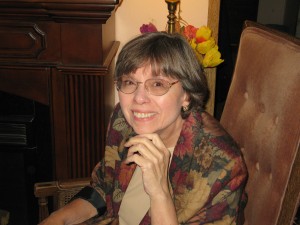 Today we’re excited to have the author Deborah Scott of the novel The Bell Tower here to take the petticoat personality test! So please give Deborah a warm welcome and read all her fun answers below to get to know a little bit about her and her book.

For the all-too-rare period of total relaxation, I enjoy curling up with a traditional mystery; by “traditional” I mean the stories and style of Ngaio Marsh, Agatha Christie, and Georgette Heyer.  Jane Austen is also a favorite. Although not much of a moviegoer, I did actually venture to a theater to see the latest incarnation of Pride and Prejudice.  And I especially liked Toy Story 2.  If it isn’t already obvious, I’ll admit to being comfortably old-fashioned in my choice of entertainment.  I tend to watch episodes of I Love Lucy, The Dick Van Dyke Show, and The Andy Griffith Show, which I preserved on my VCR…yes! I still use that dinosaur of technology!

Hmmm…if by ‘turns you on’ you mean enthralls, captivates, and charms, I’d have to go with Pride and Prejudice’s Mr. Darcy, who captured my twelve-year-old heart years ago when I saw the Laurence Olivier version on television; you can’t go wrong with a handsome, dignified, somewhat fallible but still principled and kind-hearted Englishman of a certain era.

Well, Lt. Wickham, of course, is despicable.  He brought smarmy to a whole new level.  Elizabeth’s attraction to him proves that even the most sensible among us can be fooled.

Beethoven often has that effect; the variety in his compositions is amazing.  Paul McCartney singing Yesterday still makes my heart flutter a bit.  I like toe-tappers, too, that inspire me to get up from my keyboard and move.

From Elizabeth and Darcy to Lucy and Ricky, charm and humor have my vote every time.  Ngaio Marsh’s Alleyn and Troy made her mysteries that much more interesting.

I hate to sound boring, but Elizabeth Bennet has the combination of beauty, intelligence, and gumption that I try to instill in my heroines.

Life’s too busy right now to read much for sheer pleasure, but I’m thinking of digging out my treasured first-editions of Ngaio Marsh’s Alleyn stories.  Every once in awhile I’ll pick up my copy of my first published novel Deathbed of Roses to remind me that it really is possible to find a print publisher.

Mystery Science Theater 3000, she admitted sheepishly.  The worst movies ever made, captioned by Mike and his faithful ‘bots—I dare you not to laugh.

Since I have a private humane society going at my home, I’d have to say a cat because of the species’ beauty, grace, intelligence, and unexpected sense of humor.  Watching one play, whether it’s a tiger cub or a Scottish fold kitten, is as entertaining as anything on television.  I have a precious little rescue Maltese/Bishon, too, so dogs are also a favorite.  Animals in general continue to be a source of joy and fascination.

The Bell Tower, by Deborah Scott.

ABOUT The Bell Tower 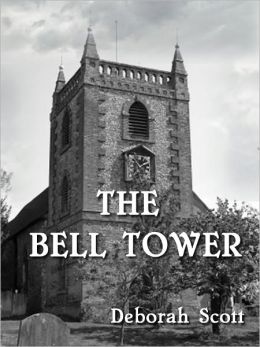 Our romance-themed entertainment site is on a mission to help you find the best period dramas, romance movies, TV shows, and books. Other topics include Jane Austen, Classic Hollywood, TV Couples, Fairy Tales, Romantic Living, Romanticism, and more. We’re damsels not in distress fighting for the all-new optimistic Romantic Revolution. Join us and subscribe. For more information, see our About, Old-Fashioned Romance 101, Modern Romanticism 101, and Romantic Living 101.
Pin this article to read later! And make sure to follow us on Pinterest.
By Amber Topping on June 13th, 2014