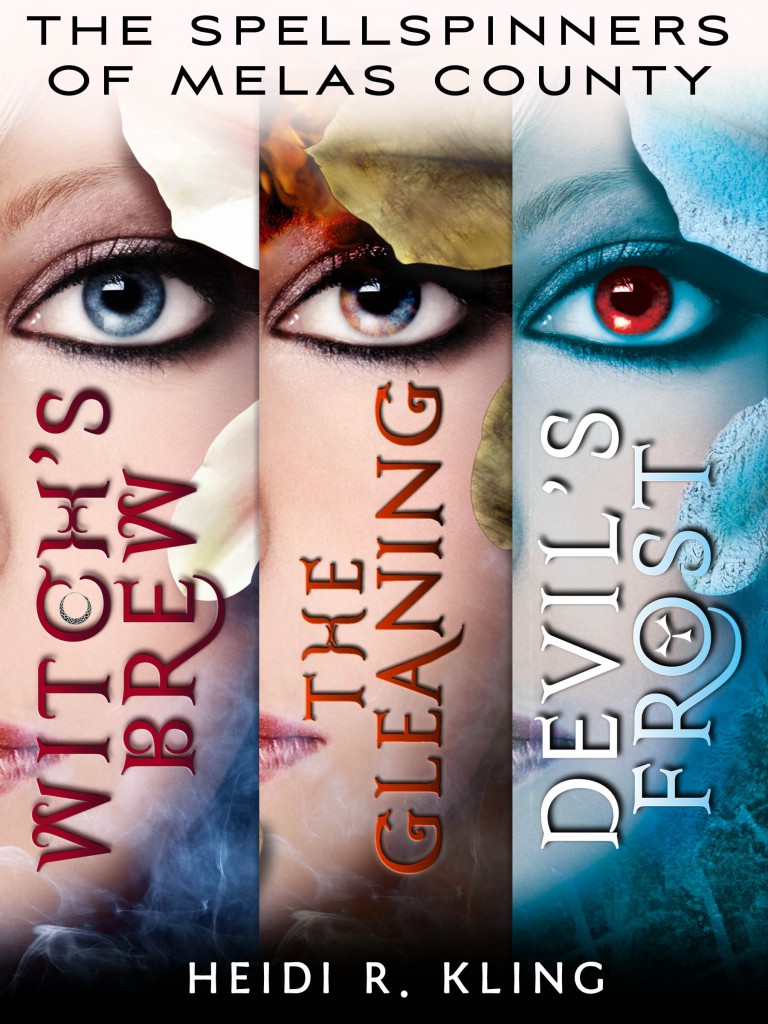 Book: The Spellspinners of Melas County

“Once soulmates, the witch and warlock covens of the California coast have been estranged for a century. Raised to despise and distrust each other, their teenagers meet in the Solstice Stones, a magical battleground where they draw energy from one another to maintain their balance.

Hatred for the warlocks is all 16-year-old Lily has ever known. Until she meets Logan. Beautiful, funny, tender, perfect Logan.

Attracted by forces stronger than their magic, Lily and Logan risk everything to fight for a future together. But when they stumble upon hidden Spellspinners secrets and realize that they may hold the key to uniting their feuding covens, the star-crossed lovers must battle forces, both good and evil, hell-bent on keeping them apart.”

For those who love a good witch tale with a nice romantic twist, The Spellspinners series by Heidi R. Kling is a fantastic choice. Right from the start, I became enchanted by this secret world of witches and warlocks torn apart by hatred and lies. Neither Lily nor Logan know the truth, secrets a constant around them that readers will love to uncover. As the two become more drawn to one another, they begin to discover that their forbidden love just might be the key to uniting the two covens sworn as enemies. But can they even trust each other when they’ve been taught that both sides are deceivers? Witches and warlocks only need each other to maintain balance during the battles they call the Gleaning after all…

Never a dull moment, the romance will enchant you with the story’s magic, leaving you breathless in battle or romantic interludes.

In the style of L.J. Smith (The Vampire Diaries; The Secret Circle), there is a strong sense of destiny and soul mates in the first three books (the story does not end at book 3 so fair warning). Lily and Logan can’t help but be spellbound by the other as if they are meant to be but are they? There is also a mysterious and handsome warlock named Jude that claims he is the one the witches have been waiting for. Never a dull moment, the romance will enchant you with the story’s magic, leaving you breathless in battle or romantic interludes. While the main focus is on Logan (half the story even from his point of view), something about him compels me and I can’t wait to see what Kling does with him in the next installment. As much as I love Logan, I can’t help but feel I might switch sides if he becomes the Damon Salvatore character of the series. I do have a thing for the bad boy.

While the star crossed love remains the central emphasis of the books, the characterization is also believable and well done. Lily has a sister, best friend and a mother that plays strong roles, while Logan also has a best friend and adopted father (Jacob has a fabulously mysterious background) who is the leader of Logan’s warlock coven. Each character comes to life and I believe they are real wholeheartedly. While much of the characterization lay hidden in shadow, when the revelations start to pop out, the characters become even more fascinating (especially the evil Jacob) as I wait for even more truths to be made evident in the next books. However, as much as I love Lily, Jacob, and the rest of the gang, I did wish they were a little less spectacular about everything with just a couple teensy more flaws to be had. Just a personal nitpick though.

Another aspect of the novel that made the experience so much fun is that in the spirit of “Choose your own Adventure,” the reader can make choices while reading the book. You can skip, go back, make a choice between two scenarios, etc. which really made for an enjoyable time for me personally. I liked deciding what choice to make (though I never did any of the skipping).

If you love L.J. Smith, entertaining YA romances about witches or of the paranormal variety of some kind, these books will likely be fun for you. While the books are not flawless and it ends just when you wanted to read the next chapter (though that is a good thing I suppose), I thoroughly enjoyed this series. It is a breeze to read through, one that will keep you up late into the night.

Since this book is still ongoing, I believe that the longevity of the books would make for an excellent TV series. Part Romeo and Juliet and part The Secret Circle, the premise is ideal for television. Personally, I would love a show about a warring group of witches and warlocks destined to be together but cursed to be apart. The intense action scenes would just be the cherry on top.

See my list of The Top 65 Paranormal Romances in Film, Literature, and Television

Our romance-themed entertainment site is on a mission to help you find the best period dramas, romance movies, TV shows, and books. Other topics include Jane Austen, Classic Hollywood, TV Couples, Fairy Tales, Romantic Living, Romanticism, and more. We’re damsels not in distress fighting for the all-new optimistic Romantic Revolution. Join us and subscribe. For more information, see our About, Old-Fashioned Romance 101, Modern Romanticism 101, and Romantic Living 101.
Pin this article to read later! And make sure to follow us on Pinterest.
By Autumn Topping on January 29th, 2014