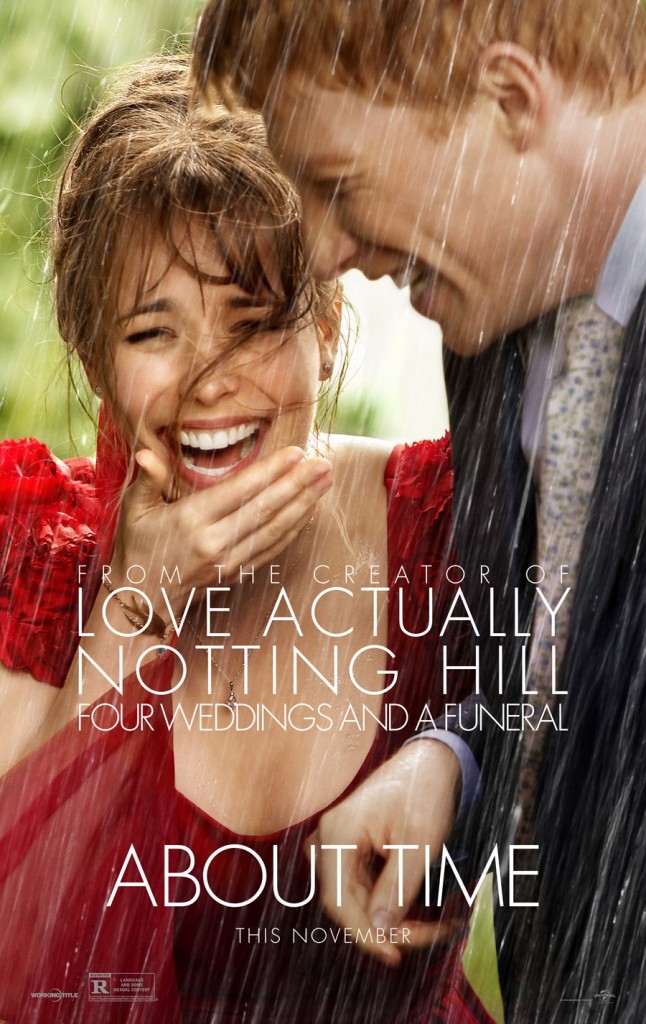 Written and Directed by: Richard Curtis

About Time is not a movie for cynics. Thankfully, I’m not a cynic. The film, written and directed by Richard Curtis (Notting Hill, Love Actually), tells the story of twenty-something Tim (Domhnall Gleeson) who discovers from his father (Bill Nighy) that all the men in his family have the ability to travel backward in time. Tim, a romantic, decides he wants to use this gift to get a girlfriend. Eventually, this works, as he develops a relationship with Mary (Rachel McAdams) and they get married. Of course, all other kinds of twists and turns happen along the way.

Some people will probably try to rip this film apart and attack the logic and rules of how time travel is presented. But this isn’t a film about time travel (as if one can ever actually make it fully realistic anyway) rather it’s a film about love and the human experience. And not just romantic love but also love for family and for friends. And it’s the latter that really helps this film soar.

The story begins with a beautifully crafted Voice Over by the protagonist Tim as he introduces each of his family members, quirks and all. It’s picturesque, shot almost hauntingly in its sentimental beauty. From his loving father, his caring mother Mary, his odd Uncle D to his expressive, albeit peculiar sister Kit Kat and finally to his own awkward, “orange” self, this is a family that is presented to feel very real, very ordinary and human. It’s easy to sit there in the theater and think of your own family, your own past.

As the story progresses and Tim learns of his power, there are many good laughs to be had. This is a Richard Curtis film after all. That said, the funniest parts of the film (as this really is more of a drama) are given to Tim and his awkwardness. It’s funny to be able to see him mess things up and then travel back in time to redo his uncomfortable, embarrassing moments. The supporting characters can also be quite amusing. Particularly the extremely cynical, negative playwright Harry (Tom Hollander) he rooms with for a while.

The romance of the story between Tim and Mary (who happens to have the same name as his mother) is lovely! Rachel McAdams has become the go to actress for romantic leading lady roles, mostly because she plays these parts to perfection with such unassuming likeability and relatability. As the part of Mary, it’s difficult to think of anyone better in the role. The two meet cute in a unique way. In fact, they meet in the dark at a restaurant during a strange dating setup. So the first time these two characters cross paths as an audience all we can hear is their conversation. It’s sweet, endearing and different. Not to mention memorable. We learn Mary is a reader for a publishing company and doesn’t really like people. Again, what Curtis does extremely well here is create very real, human characters.

My favorite part of the film, however, was the relationship between Tim and his father (played wonderfully by Bill Nighy). This is a story about people, family and relationships but the relationship between the father and son was the one with the most emotional punch. Certainly, Bill Nighy deserves a supporting acting nomination for his performance, one I’m sure he’ll never receive. But without giving anything away, I’ll say that how their story as father and son play out by the end is worth the admission price alone. I warn, bring tissues if you’re the type to cry. To be frank, it was one of the most beautiful portrayals of father and son I’ve seen in a really long time on screen, or ever at that.

In all there’s not a lot about this film I would change (it was close to perfect for me). That said, as a personal preference, I tend to like romances that are a little more drawn out. Tim and Mary sleep together almost right away. I know this was to move the plot forward more quickly, but still I prefer more build up. Also, perhaps it would have been better to cut out just one of the “F” words so the film could have received a PG-13 rating instead of an R rating. This is not a crude film by any means. In fact, it’s quite uplifting. And with the PG-13 rating I think it would have a larger audience especially because of the type of film this is. So if you’re hesitant to see the film because of the rating, you may want to reconsider. There are a few moments of language and adult situations, but it’s actually quite close to being a good family film (at least for teenagers and older).

This is a movie that makes you feel in the most sincere way. It’s not manipulative; rather it’s real and honest. You feel because you can relate. You laugh, you cry, and most of all you care. It’s the type of film that makes you stop and think about your life. Mostly it’s the type of film that reminds you to appreciate and soak in every moment of every day. In a film of powerful emotions, this romantic dramedy never ceases to pull on the heartstrings in the best of ways. I can’t recommend it enough.

Read my review of the documentary Stories We Tell.

Read the review of the film The Book Thief.