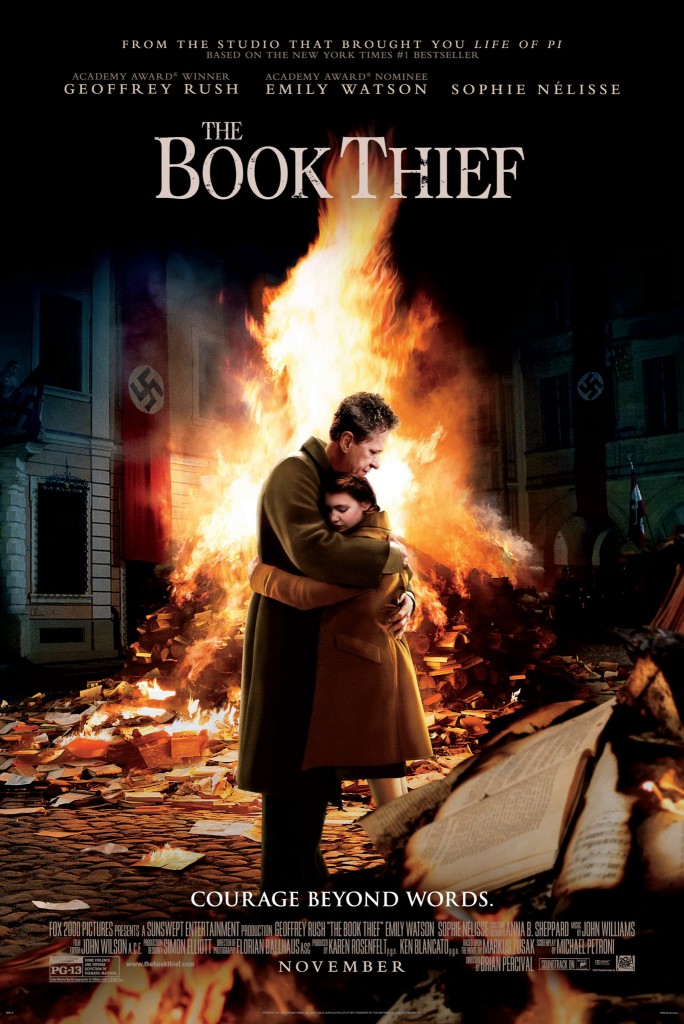 “Based on the beloved bestselling book, THE BOOK THIEF tells the story of a spirited and courageous young girl who transforms the lives of everyone around her when she is sent to live with a foster family in World War II Germany.”

Every once in a while a movie just comes along full of magic and wonder that compels you to sit up and believe in storytelling again.

Coming into The Book Thief having read the amazing book by Markus Zusak, I already knew I was going to love this (unless of course the writer and director completely botched the adaptation up) and love it I definitely did. Every once in a while a movie just comes along full of magic and wonder that compels you to sit up and believe in storytelling again. The Book Thief is such a film.

From the very beginning, I knew this movie was something special. One aspect of the adaptation I feared would be too difficult to translate into film however, was the narrator of Death itself. How in the world could this possibly make sense on the big screen? The answer was simple: tell the movie like a fable or even a fairy tale. The narration by Death was beautifully done (though nothing can live up to the book in this regard) and welcomed the audience into the story as if we like Death were intruders watching the life of a young girl in Nazi Germany. The seamless transition from storyteller (Death) to the actual story about Liesel was beautifully done. I felt just as intrigued by this young girl who steals a book at her brother’s funeral as Death did. My interest never wanes either because not only was the writing in top form but the performance by Sophie Nélisse was also truly spectacular.

In fact, the entire cast was phenomenal; the characters from Zusak’s book coming to life as if from my own imagination. Every actor embodied these beloved characters to perfection. From Liesel (whose accent is very believable and authentic sounding), loveable Hans played by the always fabulous Geoffrey Rush, Rosa portrayed by Emily Watson who captures the “thunder” behind her contemptuous but big hearted personality, newbie Ben Schnetzer as Max (the Jewish refugee they hide in the basement that Liesel reads books to), to the inspired choice of Nico Liersch as Liesel’s best friend Rudy who is just too adorable for words. Everyone put their all into these roles; no one a weak player. Particularly wonderful was the chemistry between the entire main cast including the familial relationships and also ones of friendship (and maybe even a little romance as well in of the sweetest stories to be on the big screen in a while). The performances will haunt you long after you leave the theater. If the Academy Awards were less political, there are several Oscar worthy performances in this film as well that would be very well deserved.

More than just the performances, the characterization behind the characters were also well written. Some of the characters could have remained one dimensional and demonized especially since they were German, but they weren’t. Instead, we were invited into a picture of a small village where regular people get caught up in a war (where Death welcomes many) and live in fear of saying or doing the wrong thing; we are invited to a small street called Heaven. The various characters reveal bravery in situations hopefully none of us will ever have to face in touching situations that never get too sentimental. I also love how we come to understand what is beneath several of the characters such as Rosa (Liesel’s adopted mother) who seems harsh at first but really is good at heart. The focus though on Liesel’s character is the true magic behind this story because it is her story; one that I think will touch the hearts of many.

Part of the reason I loved this film so immensely was in how it dealt with such dark and depressing material. Yes, it gets sad (for those who have read the book you know just how much) but there is also hope and an uplifting feeling about humanity itself that captures the beauty of life and death. While this is a story about World War II and the atrocities of war and even what the Nazis did to the Communists (Liesel’s mother) and the Jews, the way it is told like an oral tale from Death’s point of view makes it dreamlike and enchanted. Some may nitpick the historical inaccuracies of small things or claim this film isn’t dark enough (as if everything in life needs to be hopeless and gloomy) but to me this isn’t a story meant to be perfectly accurate or entirely miserable in spirit. Instead, this is a fable about what it means to be alive, even if that time is short. No matter what, everyone dies and it is beautiful, albeit sad. Even in the darkest of times, we can find hope, just as Liesel does in the books she steals and the words she learns to read.

The themes are also brought out visually, the atmosphere less real and once again fairylike, one scene with the fallen snow particularly stunning like a snapshot into a picturesque village on a postcard. With Death as the narrator, can we truly expect realism? Despite the dark material and time period, if you go into this with expectations of a fable rather than historical fiction, everything will make more sense. Furthermore, the theme of just telling a story through the power of words reminds us how important books actually are. What would we be without the written word? The book burning scene is a powerful reminder of what stories can bring us: optimism and the imagination. Words are power and that is why Hitler wanted so many books banned. They were too dangerous because written words give people ideas. So to surround this entire story as a narrative from Death who greets everyone at their end, reminds all of us to keep telling stories and to keep on reading. Even though we all will die one day, we all have stories (like Liesel) to tell so tell it and also live life to the fullest no matter what the world may offer you.

While the ending of the film leaves out an important part from the book (I can’t spoil it and explain what exactly), this is one film that deserves a full price ticket at the theater. From the brilliant directing from Brian Percival (a wonder at Period dramas such as the romantic 2004 miniseries North and South and several episodes of Downton Abbey), the gorgeous cinematography, an excellent screenplay by Michael Petroni, to all the memorable performances, this movie is one experience you shouldn’t miss out on!

What did you think of The Book Thief? Sound off Below…

Read our other reviews Here

Our romance-themed entertainment site is on a mission to help you find the best period dramas, romance movies, TV shows, and books. Other topics include Jane Austen, Classic Hollywood, TV Couples, Fairy Tales, Romantic Living, Romanticism, and more. We’re damsels not in distress fighting for the all-new optimistic Romantic Revolution. Join us and subscribe. For more information, see our About, Old-Fashioned Romance 101, Modern Romanticism 101, and Romantic Living 101.
Pin this article to read later! And make sure to follow us on Pinterest.
By Autumn Topping on November 29th, 2013