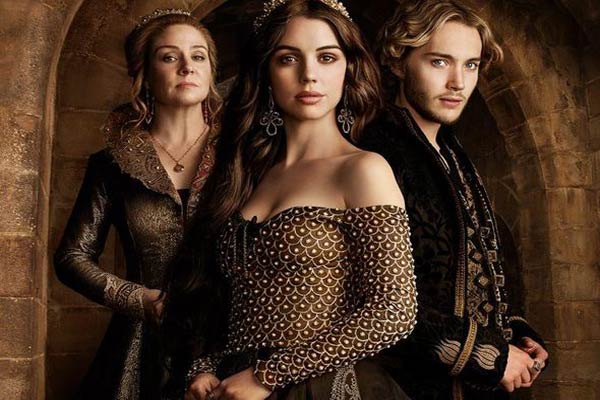 Hidden between the lines of the history books is the story of Mary Stuart, the young woman the world would come to know as Mary, Queen of Scots. The teenage Mary is already a headstrong monarch ─ beautiful, passionate and poised at the very beginning of her tumultuous rise to power.

With danger and sexual intrigue around every dark castle corner, Mary rallies her ladies-in-waiting – Greer, Kenna, Lola and Aylee – and steels herself, ready to rule the new land and balance the demands of her country and her heart.

The CW’s Reign premiered on October 17th of this year to a not overly enthusiastic reply. This author is sorry to say that she was one of those that sneered at the show’s initial efforts.  Think of Pretty Little Liars and Gossip Girl meets the Elizabethan era.

While slightly ridiculous at times, the show is growing in its entertainment factor and is slowly finding its feet and its audience. The story of Mary, Queen of Scots, and her journey to France to meet with her betrothed, Francis, is awash with court intrigue and teen excitement. So all I have to say is don’t knock it till you’ve tried it.

The casting for the show is actually not bad. One great choice was the casting of Megan Follows (Anne of Green Gables) as Queen Catherine. She plays the main villain in the story and boy does she do it well. Her plotting against Mary is the source of much of the drama and adds a nice doom and gloom aspect to it.

Follows is fantastic as the evil queen. Her obvious disdain and dislike of Mary comes across beautifully, and her machinations with the prophet, Nostradamus, are hilarious. Yet, she also shows her softer side once in a while, her reasons behind not liking Mary being that Nostradamus prophesized that Francis’ marriage to Mary would mean his death.  Her love for her son comes across and you can see the mother lion in her willing to protect her young at any cost.

The lead actress, Adelaide Kane, is also not bad. Her portrayal of Mary’s naiveté of court intrigue and the lies that permeate such a large court shines through, as does her genuine character among the schemers and liars in the court.

The scenery and sets are also magnificent. You’ve got the dark forest, rolling hills, and beautiful extravagant castle. The show is being filmed in Canada and Ireland so the splendor of the outdoor scenery is no surprise. The set design is also wonderful though. They’ve really gone to town making the castle and rooms feel like they’re from a medieval royal building. The fabrics are sumptuous and the wood and stonework done is fabulous.

The plot is also quite entertaining. The typical intrigues of the court are just the beginning. There is also murder, blackmail, death plots against Mary, escaped prisoners, a mysterious woman hiding in the walls of the castle, and oh so much more!

Many of the costumes are also gorgeous, and made to feel very much from that period. However, that is where my complaints begin.

Now when you mix something like Pretty Little Liars or Gossip Girl with the Elizabethan period, they are supposed to still be enmeshed in that period, clothes and all. The show does a poor job of keeping that line intact. The costumes of the main young women do not look like they come from the era. Rather, they look like something one might wear on today’s red carpet or other large fashionable event (or even prom). From the fabrics used to the design, everything is just plain inappropriate.

And the costumes are not the only inappropriate thing to enter this show. The choice of actresses to play the main roles is at odds with the time period as well. You have very beautiful girls with tan skin and full lips, something you would not have found among royalty at that time, as tan skin was an indicator that you were poor and could not protect your skin from the sun’s rays.

The interaction between the characters is also something more akin to teens in a modern high school setting. You’ve got your cliques, your boyfriend drama, and feisty misbehaving teens. I’m pretty sure that at that time the younger generation were quite a bit more likely to do as they were told, no questions asked. If your parents wanted you to marry someone, you married them, you didn’t decide you loved your mistress too much to do so. Besides, the mistress could still come along with the marriage. Being married certainly didn’t mean fidelity would ensue.

Another issue I had with the show was the very adult content. Teens might know everything about sex today, but I don’t think they snuck around watching people have sex on their wedding night in that time period. Also, the adult content seems awfully mature for the show’s teen audience. I even felt embarrassed while watching it. I can’t imagine that showing a couple making love, even if it is through a sheer curtain, is appropriate for such a young audience.

One plot in the story is Mary’s friend Kenna’s affair with the King. I’m not sure how other people reacted to a sixteen year old having relations with a middle aged man, but I found it all rather distasteful. Did the shows writers and producers really need to put that in? I for one could have done without it.

Overall, despite the problems I did have with the show, after watching it through its’ current episode, I’d have to say that I enjoy it. It is entertaining if nothing else. And, hell, you get to see men in tight pants. That’s always a win in my book.

What are your thoughts on Reign? Sound off below…