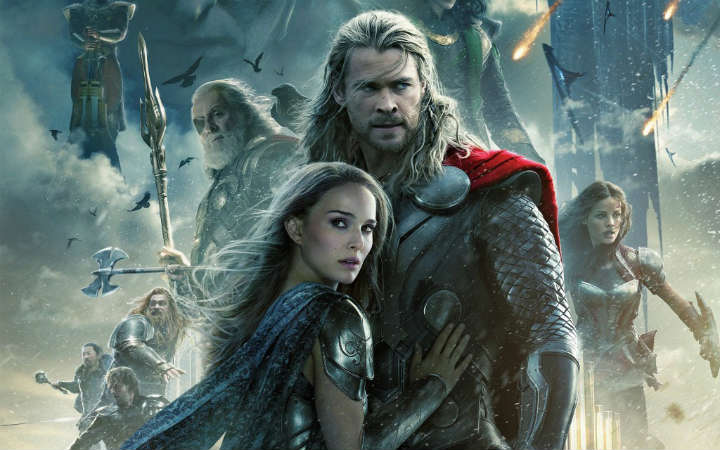 As promised, this is part 2 of our recommended upcoming movies from now until Christmas time (Read Part 1 Here . Like our TV recommendations, this is, of course, a biased list of films relevant to the content of this site. Hopefully, everyone can discover at least one movie that may not have heard of before!

THE MOVIE: A Case of You

WHY YOU SHOULD SEE IT: It has the potential to be a cute romantic comedy.

Young writer Sam has a crush on Birdie, the cute and quirky barista at his local coffee shop. When his conventional attempts to woo her crash and burn, he takes his efforts online, creating an Internet profile embellished with all of the details that would make him Birdie’s dream guy: ballroom dancing, rock climbing, a seemingly endless, escalating series of wacky and unlikely hobbies. When the harebrained scheme is a surprise success and Birdie falls for his exaggerated alter ego, Sam must keep up the act or lose his dream girl forever.

THE MOVIE: Thor: The Dark World

WHY YOU SHOULD SEE IT: With this cast (particularly the Ninth Doctor) is there any reason not to see this?  Plus, the first film was just super entertaining.

Faced with an enemy that even Odin and Asgard cannot withstand, Thor must embark on his most perilous and personal journey yet, one that will reunite him with Jane Foster and force him to sacrifice everything to save us all.

THE MOVIE: The Book Thief

WHY YOU SHOULD SEE IT: Based on one of the best books I have read in years, this film is not to be missed. If you haven’t read the book yet, do yourself a favor and go read it before going to the movie. If you still don’t want to read it, this is a great story that will make for a fantastic film. The character of Death is particularly engaging and fascinating.

Based on the beloved bestselling book, THE BOOK THIEF tells the inspirational story of a spirited and courageous young girl who transforms the lives of everyone around her when she is sent to live with a new family in World War II Germany.

WHY YOU SHOULD SEE IT: This one is pretty explanatory. I’m looking forward to seeing how book 2 is adapted.

Katniss Everdeen and Peeta Mellark become targets of the Capitol after their victory in the 74th Hunger Games sparks a rebellion in the Districts of Panem.

WHY YOU SHOULD SEE IT: From the screenwriter of Wreck-It-Ralph, Veronica Mars as the lead, and based on “The Snow Queen,” this could turn out to be a lot of fun the whole family can enjoy.

WHY YOU SHOULD SEE IT: Starring Idris Elba (Luther) as the historically interesting Nelson Mandela, directed by the fabulous director of the BBC Period Drama Bleak House, and written by William Nicholson (Shadowlands, Les Miserables, and Gladiator).

A chronicle of Nelson Mandela’s life journey from his childhood in a rural village through to his inauguration as the first democratically elected president of South Africa.

THE MOVIE: Inside Llewyn Davis

WHY YOU SHOULD SEE IT: If you like the Coen brothers (Fargo, True Grit, and Oh Brother Where Art Thou?), then this movie will probably be for you.

Follow a week in the life of a young folk singer as he navigates the Greenwich Village folk scene of 1961. Guitar in tow, huddled against the unforgiving New York winter, he is struggling to make it as a musician against seemingly insurmountable obstacles — some of them of his own making.

THE MOVIE: The Hobbit: Desolation of Smaug

WHY YOU SHOULD SEE IT: By now, I think you either like this franchise or you don’t. Put me down for one who loves it and can’t wait for the release! Plus, this movie really does have a lot of my fantastically underused actors (Richard Armitage, Aidan Turner, and Lee Pace for instance.).

After successfully crossing over (and under) the Misty Mountains, Thorin and Company must seek aid from a powerful stranger before taking on the dangers of Mirkwood Forest–without their Wizard. If they reach the human settlement of Lake-town it will be time for the hobbit Bilbo Baggins to fulfill his contract with the dwarves. The party must complete the journey to Lonely Mountain and burglar Baggins must seek out the Secret Door that will give them access to the hoard of the dragon Smaug. And, where has Gandalf got off to? And what is his secret business to the south?

WHY YOU SHOULD SEE IT: The stellar cast, Walt Disney versus the writer of Mary Poppins (I’ve heard that she really did despise him in real life), and I don’t know how you can’t want to watch this after the trailer.

When Walt Disney’s daughters begged him to make a movie of their favorite book, P.L. Travers’ “Mary Poppins,” he made them a promise – one that he didn’t realize would take 20 years to keep. In his quest to obtain the rights, Walt comes up against a curmudgeonly, uncompromising writer who has absolutely no intention of letting her beloved magical nanny get mauled by the Hollywood machine. But, as the books stop selling and money grows short, Travers reluctantly agrees to go to Los Angeles to hear Disney’s plans for the adaptation.

THE MOVIE: The Monuments Men

WHY YOU SHOULD SEE IT: Written and directed by George Clooney (Ides of March and Good Night, and Good Luck), and with A-list names on the cast this film is already getting good buzz. The story doesn’t sound half bad either.

Based on the true story of the greatest treasure hunt in history, The Monuments Men is an action drama focusing on an unlikely World War II platoon, tasked by FDR with going into Germany to rescue artistic masterpieces from Nazi thieves and returning them to their rightful owners. It would be an impossible mission: with the art trapped behind enemy lines, and with the German army under orders to destroy everything as the Reich fell, how could these guys – seven museum directors, curators, and art historians, all more familiar with Michelangelo than the M-1 – possibly hope to succeed? But as the Monuments Men, as they were called, found themselves in a race against time to avoid the destruction of 1000 years of culture, they would risk their lives to protect and defend mankind’s greatest achievements.

WHY YOU SHOULD SEE IT: Based on the trailer alone, this could turn out to be one of the best love stories of the year and certainly one of the most original since Eternal Sunshine of the Spotless Mind.

A lonely writer develops an unlikely relationship with his newly purchased operating system that’s designed to meet his every need.

WHY YOU SHOULD SEE IT: Jack Ryan films always promise something at least semi-entertaining but this one is directed by Branagh so the final product should prove to be interesting.

Jack Ryan, as a young covert CIA analyst, uncovers a Russian plot to crash the U.S. economy with a terrorist attack.

WHY YOU SHOULD SEE IT: The ensemble cast. This will probably turn out to be an amazing character piece with powerful performances from all the actors. And above all else, we should support more of these films about women.

A look at the lives of the strong-willed women of the Weston family, whose paths have diverged until a family crisis brings them back to the Oklahoma house they grew up in, and to the dysfunctional woman who raised them.

WHY YOU SHOULD SEE IT: The released movie clip looks compelling and Kate Winslet always knows how to pick a good script.

Depressed single mom Adele and her son Henry offer a wounded, fearsome man a ride. As police search town for the escaped convict, the mother and son gradually learn his true story as their options become increasingly limited.

What movies are you looking forward to the most? Did I miss out on a film you think I should add to the list? Sound off below…

Check out some of our Film Reviews Here

If you love a good love story, don’t miss my Top 50 Classic Romances in Film that Will Make You Swoon!