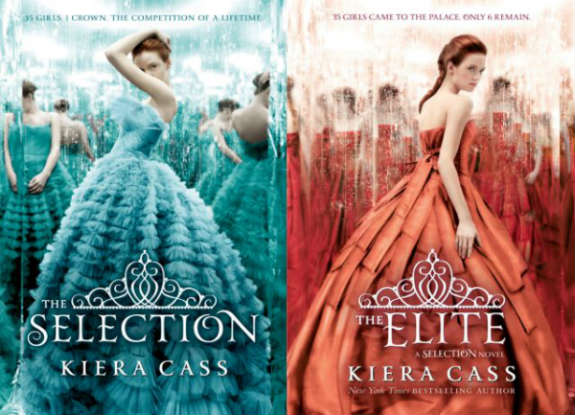 In this dystopian future, the world has already fought two more world wars, completely demolishing the United States as we know it. Instead of a democracy, the United States is now a monarchy with a king and a strict caste system dividing the classes. Not unlike in the hugely popular Hunger Games, a competition between members of different castes is at the heart of this novel. This competition, however, is not for survival, but for the hand of the prince. Think of a dating games version of the Hunger Games and you’ve got The Selection.

RELATED For Darkness Shows the Stars: A Dystopian Retelling of Jane Austen’s Persuasion

The beginning of the first book struck me as somewhat juvenile in its’ writing style and in the initial premise. I found the relationship between America and her first beau, Aspen, somewhat boring and without real depth. The first book introduces the reader to America, a girl from the lower castes, who, to the surprise of the entire country, is chosen to take part in the selection. The idea for the selection comes almost straight out of the reality television show, The Bachelor. In Ilea, the new name of United States, Prince Maxon plays the role of the bachelor; wining and dining each girl in the selection until he can whittle down his choice from 35 girls to one lucky winner, who will become the princess and future queen of Ilea.

Of course, no good love story would be complete without a love triangle or two to foil the happiness of our main couple. America has to choose between her childhood love, Aspen, and her new love interest, Prince Maxon. While the chemistry between America and Maxon is written well, and believable in its intensity, America’s romantic interactions with Aspen just don’t come across as genuine. Plenty of intrigue and machinations from the other contestants also ensues, causing its own problems for our heroine, America, and her complicated love life.

While the main focus of the plot in books 1 and 2 centers around America and her relationships with these two men, we do begin to see more of the political problems and turmoil in the country by the middle of book two. The story expands to focus not only on the relationships but also on the serious political issues in this dystopian future that are slowly drawing the main characters into their midst.

The reader starts to see more of a similarity to the theme of the Hunger Games in the second book, turning its’ attention to the real heart of the story, the problems in this fictional society and why it needs to undergo a major shift, and how this can be achieved. While the focus remains primarily on the couples and the mayhem of the selection, the reader can see the plot heading in a more serious direction that will include commentary on the injustices in the way of life in Ilea. As well as the changes that need to happen to fix this divided and unjust society.

The Selection provides a nice middle ground in the emerging dystopian genre. The plot is lighter, with an entertaining love story as its’ focus, making it a fun read that doesn’t become incredibly morose and serious. At the same time, the author does make sure to include the kind of political and social commentary on the dystopian society that is also necessary to the genre. In The Selection, one has the meatiness of the serious (but not overdone) commentary. And one can still enjoy a more lighthearted story about young love as well.

I personally loved the Hunger Games, as I’m sure many of you also did, but The Selection provides a complementary foil for fans of the dystopian genre. I would definitely recommend trying it out and eagerly await the next installment.

You can buy the books on Amazon.

Our romance-themed entertainment site is on a mission to help you find the best period dramas, romance movies, TV shows, and books. Other topics include Jane Austen, Classic Hollywood, TV Couples, Fairy Tales, Romantic Living, Romanticism, and more. We’re damsels not in distress fighting for the all-new optimistic Romantic Revolution. Join us and subscribe. For more information, see our About, Old-Fashioned Romance 101, Modern Romanticism 101, and Romantic Living 101.
Pin this article to read later! And make sure to follow us on Pinterest.
By Rebecca Lane on August 22nd, 2013