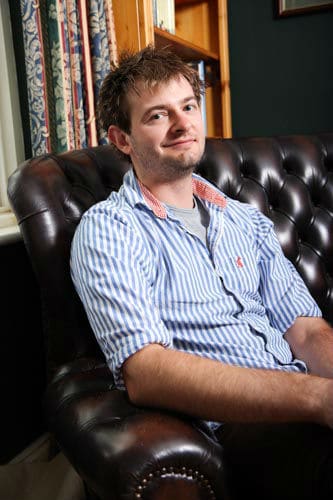 Today, I’m lucky to have author Jack Croxall of Tethers (The Tethers Trilogy #1) here to talk and spill a little bit about his background and book.

Congratulations on the release of your debut novel Tethers, the first in the trilogy. What is the book about?

Thank you! Tethers is a YA Victorian fantasy which follows teenagers Karl Scheffer and Esther Emerson as they discover a mysterious journal and are drawn into a treacherous conspiracy. Karl and Esther are frustrated by their quaint rural lives and so they find the allure of the mysterious journal impossible to resist, especially considering the final entry cites them both by name …

Can you tell us a little bit about yourself? How has having a scientific background influenced your writing?

Well, I live in rural Nottinghamshire (where the book is partially set) and, as well as being an author, I write lots of sciency articles for various outlets. Whilst I was growing up I fell in love with nature and that passion infiltrates my writing. Nature is very important in Tethers both as part of the countryside setting but also as a set of rules which an artefact in the book seems to subvert. On top of this a main character, a scientist, wrestles with the greater good, as a moral justification.

What made you decide to go down the YA route with the trilogy? Is there something about the genre you’re drawn to?

When I was a teenager I fell in love with the YA genre, and I still adore it! I suppose I find gritty coming of age stories perpetually irresistible. When I started writing my book I naturally wanted to write in the genre I loved, and so my protagonist was a teenager named Karl from the beginning.

Something I really loved about your book was the characters. Every character was memorable, even if the part was small. Did the inspiration for the characters come from real life, your imagination, or a bit of both?

Wow, that’s a lovely thing to say, thank you! A couple of characters came from people I know, re-imagined in the Victorian era (I couldn’t possibly say who, though!) A lot of other characters have the odd trait or two of mine but most of them just sort of appeared exactly the way they are in the book during the writing process.

I thought that the two teenagers, Karl and Esther, were a dynamic team and a lot of fun to read. I can easily see their adventures continuing as they grow. Any plans to take their characters beyond the trilogy?

I’m not sure. Karl and Esther are going to have a lot on their plates over the course of the next two books and I can see a definite end to their story arcs. If I was to write something else in that world (but outside of the trilogy) I imagine it might be a short story involving one of the secondary characters, Harland perhaps.

With all of the vivid characters, sword fights and action it’s easy to imagine Tethers as a feature film. Is that something you’ve considered? If so, do you have any casting choices or even a director in mind who you think would be able to capture the essence of your novel?

My brother is actually a professional film-maker with several excellent short films to his name. We have had a few talks about doing something with Tethers, possibly involving Kick Starter but probably not for a while. We will have to see, watch this space!

You are an indie/self-published author who is doing very well. What advice would you give to aspiring authors who are considering going down the self-published route?

Thank you once again! I’m not sure how well I’m doing really, I only have one book out so far! However, I have been utterly thrilled with the reception Tethers has got, people have said such nice things about it and that really does make me so happy. As for advice for other upcoming indies, perhaps to prepare for lots of hard work! Promo is a serious effort and you have to devote a huge amount of time to it to get anywhere in the crowded book marketplace.

If you could pitch Tethers to potential readers, what would you say to convince them to read it in one sentence?

Gosh, tough one. I would say: read Tethers because there is far, far more at stake than the central characters realise.

Where can readers follow you, or stay up to date with what you’re doing? For instance, I’m sure there will be many fans anticipating the release of the second book in the Tethers trilogy!

I’m a bit of a twit-aholic so @JackCroxall on twitter is a good place to start. My author blog, www.jackcroxall.co.uk is also kept right up to date. I post a lot of YA book and film reviews too!

Where can people find your book to buy?

The book is available as a paperback or ebook from Amazon (half of all royalties amounted from paperback sales will be donated to ME Research UK).

We also like to do something a little fun at The Silver Petticoat Review, where we ask our interviewees a series of fun pop culture questions to close the interview. Our “Petticoat Personality Test” if you will. First up, what is your favorite book, movie and/or TV Show?

His Dark Materials by Philip Pullman, Jurassic Park and the fabby The Walking Dead.

A dolphin, their lives look like so much fun! 😀

I’m a huge fan of intelligent YA zombie novels so I think Rot and Ruin should be adapted for the big screen. An unbelievably good book, it could be something very special if handled properly!

For my full thoughts on Tethers, read the review here.

You can read our interview with Jessica Dotta of Born of Persuasion here.

Our romance-themed entertainment site is on a mission to help you find the best period dramas, romance movies, TV shows, and books. Other topics include Jane Austen, Classic Hollywood, TV Couples, Fairy Tales, Romantic Living, Romanticism, and more. We’re damsels not in distress fighting for the all-new optimistic Romantic Revolution. Join us and subscribe. For more information, see our About, Old-Fashioned Romance 101, Modern Romanticism 101, and Romantic Living 101.
Pin this article to read later! And make sure to follow us on Pinterest.
By Amber Topping on August 20th, 2013