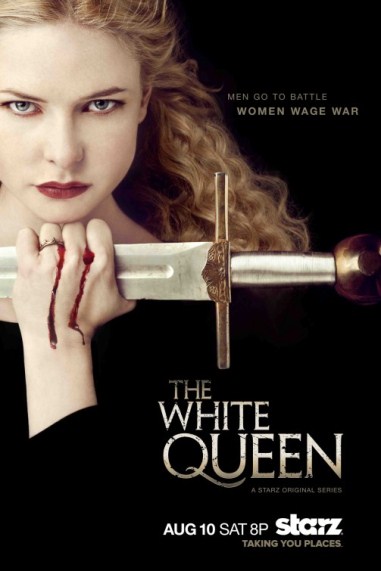 THE SHOW: The White Queen

Based on the Philippa Gregory novels, the ten-episode historical drama series The White Queen begins in the middle of The Wars of the Roses in 1464 when Elizabeth Grey-Woodville (future White Queen) wakes up from having strange, prophetic like dreams. The beautiful young widow soon catches the attention of the new king, Edward IV and romance ensues. All the while, dark premonitions continue to haunt her.

For those familiar with the period, you can probably guess why. But for those who aren’t, The Wars of the Roses were dynastic wars between the houses of York and Lancaster (their symbols being a white rose and a red one) over the throne of England. The fight lasted 30 years, but not without scandal and tragedy.

There’s enough history here to easily fill an entire show, let alone a single season of ten episodes. At the least, it’s unlikely the series will be uneventful.

There’s enough history here to easily fill an entire show, let alone a single season of ten episodes. At the least, it’s unlikely the series will be uneventful.

“In Love With the King”

The first episode “In Love with the King,” is all about the budding (or sudden) romance between commoner Elizabeth Grey-Woodville and King Edward IV.  At first, being a known womanizer he simply wants her as his mistress, but she refuses. Does she say no out of a sense of right and wrong? Or does it go deeper? There is the obvious answer that she’s simply manipulating him into marriage. Well whatever she does, it works.

They’re soon married in secret but not without their secret quickly being exposed. Edward refuses to give Elizabeth up to marry a French princess (which his cousin Lord Warwick proposes) and instead announces his marriage to Elizabeth. Not surprisingly, most of the royal court is unhappy with the match; especially Lord Warwick and Edward’s mother Duchess Cicely. No doubt as the season continues there will be many characters scheming to remove Edward from the throne.

The White Queen premiered on the BBC (it’s co-produced by STARZ) in June with mostly unfavorable reviews. Critics felt that it wasn’t historically accurate enough for them. In other words, it was too “pretty.” Shouldn’t people from the 15th century have bad teeth and hygiene? Well, that’s the argument anyway.

The series has also regularly been compared to a female version of Game of Thrones, and while the comparison has merit, the first episode reminded me more of Romeo and Juliet in royal court than anything else. The violence is mild with the romance being a tad more traditional in approach. But that may change as the season continues.

The show is not going to win any awards, but it’s unquestionably entertaining. Even amongst war, the scheming characters, witchcraft, and villainy draw you in. You don’t care if there are historical inaccuracies. Why? It’s fun to watch. I still love Ever After, for instance, even though there were Americans faking English accents in a French setting.

The White Queen ignites a flame of intrigue over The Wars of the Roses. Who was the real Elizabeth Woodville, the woman who bewitched a king to become queen?

Besides, does anyone go to the movies or watch a show for an actual history lesson? That said, what they can do is spark an interest in a specific person or time. And that’s what I think this show does successfully. The White Queen ignites a flame of intrigue over The Wars of the Roses. Who was the real Elizabeth Woodville, the woman who bewitched a king to become queen?

What makes The White Queen especially good are the characters and the performers. Rebecca Ferguson as Elizabeth (the white queen) is beautiful and even enchanting in the role. She’s a female character with heart, soul, and spirit. When she stood up to the intimidating Duchess Cicely, I knew I would like her.

Then there’s Max Irons as the King. Here, he finally begins to make an impression. His wooden performance in Red Riding Hood almost had me write him off completely, but then I saw major improvements with his performance as Jared in The Host and I thought perhaps with a little more time he could actually become an actor. And here as the womanizing, romantic King Edward IV I actually believe he can be. He no longer sounds fake as he delivers lines which show me that he’s really been working on improving his craft, and I appreciate that. He’s handsome and charming as the king and I look forward to seeing him grow as the season continues.

The most memorable performances, however, belong to the secondary cast. Janet McTeer relishes the role of sorceress as well as mother to the new queen. She maneuvers and manipulates with the best of them, all the while still having a heart of gold. Furthermore, it’s impossible not to enjoy the obvious, almost one-dimensional villainy of James Frain as Lord Warwick. He almost always plays villains and it’s simply because he’s just so good at it. I say keep the roles coming! And who can forget the chilling performance of Caroline Goodall as Duchess Cicely, the king’s mother? She’s simply frightening in the role but in a good way.

For me, the romance was rather quick, but then I guess that’s the story from history. It’s so fast, in fact, that there’s no way that their love could be based on anything other than physical attraction, at least in the beginning. Well, unless you believe in love at first sight. But if you like Romeo and Juliet then you should like this romance just fine. Though somehow I suspect the king will have a very hard time being faithful.

Is The White Queen a prettified version of the time period? Yes. But so are most historically based movies and TV Shows. If you’re looking for a historically accurate portrayal of the period with bad teeth, low hygiene, and no supernatural additions, or even an Emmy worthy script, then this isn’t the show for you.

But if you’re okay with a rose-colored depiction of history (there are even some white teeth!), some generic romance, interesting characters with memorable performances and an all-around entertaining set up, then this show might be up your alley.

The White Queen, with its story of warring dynasties over the throne of England, has a strong hook. The biggest crime a show can have is to be boring. And this show is definitely not that, inaccuracies and all!

Content Warning: The series is rated TV-MA. Also, two versions of the show exist. The one airing on STARZ has more nudity and graphic sex scenes than the version aired on the BBC. So we recommend the BBC adaptation if you choose to watch as it has less explicit content.

Update: The series is now available to rent and buy.

What did you think of The White Queen? Sound off below…

Our romance-themed entertainment site is on a mission to help you find the best period dramas, romance movies, TV shows, and books. Other topics include Jane Austen, Classic Hollywood, TV Couples, Fairy Tales, Romantic Living, Romanticism, and more. We’re damsels not in distress fighting for the all-new optimistic Romantic Revolution. Join us and subscribe. For more information, see our About, Old-Fashioned Romance 101, Modern Romanticism 101, and Romantic Living 101.
Pin this article to read later! And make sure to follow us on Pinterest.
By Amber Topping on August 11th, 2013

4 thoughts on “The White Queen: Episode One Review – An Entertaining Adaptation”