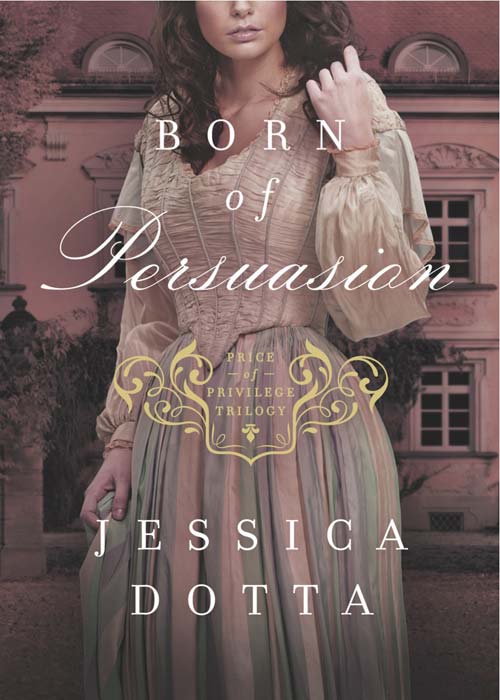 (I received a free copy of Born of Persuasion to write an honest review on The Silver Petticoat Review. I was not financially compensated for this post and all opinions are my own.)

Who doesn’t love a good, old-fashioned Jane Austen-like historical romance? Or an entertaining, Gothic and Bronte ‘esque’ suspense-filled mystery? Well, I know I eat these stories up faster than I can a piece of chocolate cake. Unfortunately, finding these types of stories (or at least good ones) outside the classics are sadly few and far between. In Jessica Dotta’s debut novel, however, I finally found one I could devour; each page hypnotizing me with its power to uncover what happens next.

Born of Persuasion, the first in the Price of Privilege Trilogy is a brilliant introduction for Dotta, its magic emanating not only from its classic “sense,” but also from its very modern “sensibility.”

In the year 1838, Julia Elliston finds herself orphaned under tragic circumstances and suddenly placed under the whims of an aloof guardian who plans to send her off to Scotland as a widow’s companion. With immense pressure to live as a servant, Julia feels she has no choice but to catch a husband.  When her first love Edward is unable to marry her, the reader is left wondering if the impetuous Julia will instead turn to the dark, yet mysterious Mr. Macy.

Born of Persuasion, the first in the Price of Privilege Trilogy is a brilliant introduction for Dotta, its magic emanating not only from its classic “sense,” but also from its very modern “sensibility.”

Part Jane Austen (Mrs. Windham strongly echoes Mrs. Bennet) and part Charlotte Bronte, Jessica Dotta weaves a Gothic story effortlessly into the world of petticoats, scandals, secret engagements, and marriage proposals. Dotta is so good at suspense that she had me questioning the characters’ motives and feelings at every corner. Does Julia love Edward despite his religious beliefs or does she love the handsome Mr. Macy who claims he can protect her from danger? And who can she truly trust when no one is exactly as they seem?

Romantic and entertaining to its core (with excellent mysteries thrown in for good measure), I was literally on the edge of my seat. Sure, sometimes Julia’s choices made me want to knock some sense into her, but mostly I felt just as torn as Julia between the charismatic Macy and the moral but tortured Edward. Truly, my only real complaint is that the novel ended without an actual ending. I still don’t have all the answers I was seeking (like who can I ‘really’ trust) and will have to wait patiently for the next two books to find out.

If you love Jane Austen, Charlotte Bronte, or even television series like Downton Abbey, this novel is for you.

One character’s motivations are particularly open-ended in an “I really want to know the truth” way. Nevertheless, there is no doubt I will consume the next two novels as swiftly as they become available. Solid characters, alluring romances, and a vivid picture of Victorian England that transports you back in time, all make for a compelling read. If you love Jane Austen, Charlotte Bronte, or even television series like Downton Abbey, this novel is for you. Overall, the title Born of Persuasion sums it up perfectly; for, by the story’s end, I could not help but be persuaded to love it.

This needs to be a television series, Downton Abbey style. What I mean by that is short seasons of only 6-8 episodes. With mysteries and larger than life characters, the Price of Privilege Trilogy could make for gripping TV. I know I would tune in weekly for my Victorian, romantic fix. My only question is why there are no shows like this on television at this very moment? With Period Drama increasing in popularity, an adaptation of this type of Victorian series would be television gold if done with the right cast and crew.

You can read the first chapter sneak peek here!

5 thoughts on “‘Born of Persuasion’ Review – A Hypnotizing Gothic Romance”