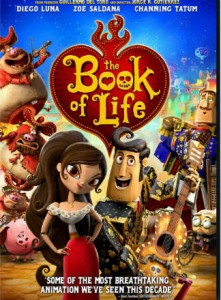 What it is about: A young hero travels between the world of the living and the world of the dead. So perfect for this time of year because it heavily features the traditions associated with celebrating the Day of the Dead in Mexico.

Spookiness factor: This is one of the most colorful movies you’ll see this season. It’s lively and fun and gorgeous and will sometimes make you feel like you’re in one glorious party more than anything else.

Alternative suggestion: The Box Trolls, a whimsical tale about some not very scary trolls and an evil exterminator. 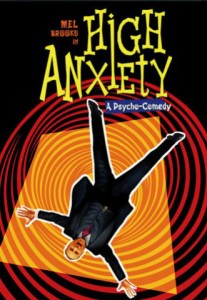 What it is about: This is definitely not a traditional horror movie at all, but somehow this silly thriller satisfies my desire for ridiculous fun for the season. Mel Brooks incorporated elements of many Alfred Hitchcock films in this movie about a psychiatrist who is framed for murder and tries to clear himself.

Spookiness factor: Basically nothing. Even a sendoff of the hero being attacked by birds like the classic Hitchcock film becomes goofy.

What it is about: One of my favorite movies, The Nightmare Before Christmas tells the tale of the dapper skeleton king of Halloween Town who gets bored with his job and decides to take over Christmas for once. Chaos and craziness ensue.

Spookiness factor: Cute and occasionally creepy goblins and ghoulies abound, and even Jack has some scary moments that might bother sensitive children, but this is mostly endearing and delightful stop-motion animated creatures singing their hearts out with some mischievous tunes.

Alternative suggestion: A Christmas Carol – another holiday themed scary tale. Use the fact that it features ghosts as an excuse to watch your favorite version for Halloween. 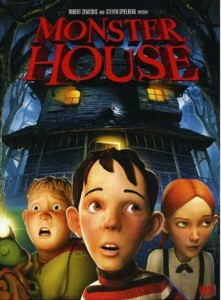 What it is about: Some children need to face the horrors of a living breathing house to stop its reign of terror.

Spookiness factor: One of the movies with the most scares on my list. Think of it as a very thrilling adventure but with a very creepy antagonist. It invokes all the feelings you’ve had about any rickety old house you’ve had to pass at night.

Alternative suggestion: The Goonies. Children going off on scary adventures is not a bad bet for Halloween. 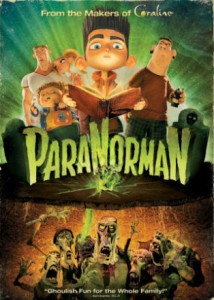 What it is about: Poor Norman can see the dead around him though no one else can, and this understandably doesn’t work out too well for him. In the end, he and his friends will have to contend with an ancient curse, zombies, and other scares before everything is done

Spookiness factor: This story can be very suspenseful and be ready for some situations which stir your emotions, but this is really fun and a funny adventure too.

What it is about: Since this is one of my favorite movies you can’t blame me too much for trying to work it in. This is a fantasy movie, but the plot sounds like it totally could go the way of the horror movie right? A goblin king steals a baby away to his labyrinth. The baby’s intrepid older sister sets out to save him.

Spookiness factor: If you’re familiar with Jim Henson’s creature shop, you’re acquainted with the fascinating, delightful and fey beings that inhabit this land. Some of the situations might disturb very little children, but this is far more captivating than anything else. David Bowie in his Goblin King garb is enough to mesmerize you alone.

What it is about: The 1999 version of this classic monster movie theme tells the story of some treasure seeking adventurers who awaken a mummy that sets out to take his vengeance on the world (which is the first thing all of us would do in the same situation you have to admit).

Spookiness factor: This adventure features Indiana Jones style thrills and scares which can get pretty intense.

Alternative suggestions: If you think about it, Raiders of the Lost Ark and The Temple of Doom make great Halloween viewing.

This, of course, is not an exhaustive or a definitive list so feel free to weigh in with your own opinions and suggestions in the comments. What not-so-scary movies do you watch on Halloween?

Our romance-themed entertainment site is on a mission to help you find the best period dramas, romance movies, TV shows, and books. Other topics include Jane Austen, Classic Hollywood, TV Couples, Fairy Tales, Romantic Living, Romanticism, and more. We’re damsels not in distress fighting for the all-new optimistic Romantic Revolution. Join us and subscribe. For more information, see our About, Old-Fashioned Romance 101, Modern Romanticism 101, and Romantic Living 101.
Pin this article to read later! And make sure to follow us on Pinterest.
Pages: 1 2
By Dixie-Ann Belle on October 28th, 2015