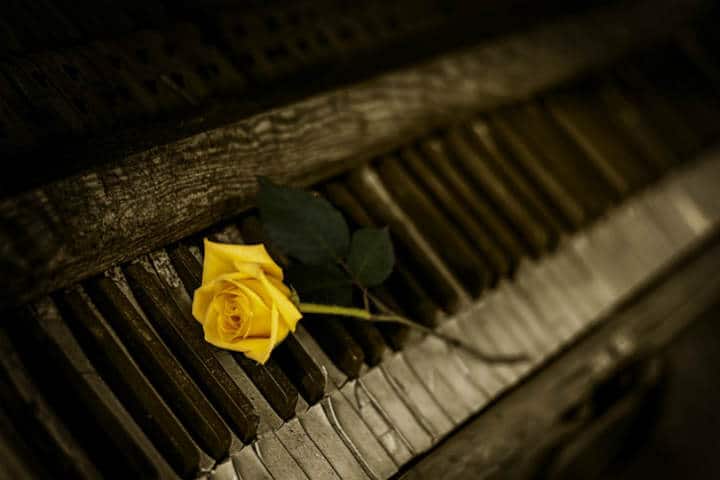 Music has a way of bringing people together. It’s a universal language that gives us the ability to express ourselves without words. Love, anger, frustration, contentment, and passion are just a few of the emotions that we have come to associate with famous instrumental pieces. Sometimes, words are unnecessary and only get in the way. So it is fortunate that one can have an entire conversation with someone simply by playing an instrument together. Join me in listening in on some of the best conversations out there that can only be achieved through piano duets.

“If music be the food of love, play on.” – Shakespeare

Related Post: Dancing is Good for the Soul, the Body, and the Spirit – 15 Spontaneous Dance Scenes from Film and TV

This glorious scene will have you smiling throughout. Written, directed, composed and acted in by Jay Chou, this Taiwanese masterpiece has no shortage of musical talent.

#2: Victor & The Bride – A Reconciliation

When words fail to do the trick, trust music to help you breeze past that nasty argument. Evidently, it works just as well on the dead as on the living.

Falling in love can be a gradual process, a large part of which is the appreciation and respect of the other person’s talent and potential. That is the case for Nodame and Chiaki: Magic happens whenever they play the piano together. They enter a world of their own and people around them blink out of existence for that moment in time.

Watch a love-struck, adorable Ron get hypnotized by the mere presence of Hermione in this short and sweet scene.

For people who have difficulties expressing themselves through words or whose words are often misunderstood, playing an instrument is the best way of showing one’s true emotions.

I could not find a clip of this scene, but you can get this popular teen romantic dramedy on DVD.

Friends can also find playing the piano together an excellent emotional outlet. It’s an art that can be enjoyed by all.

This scene is truly an Ode to Joy, life, love, and friendship. Setting aside some time to play for fun is very important, as we find out here. It helps breathe life back into the craft and one’s everyday life.

Watch the trailer for this drama here.

A piano duet can also be full of mistrust and suspicion just like a normal conversation between two people. In the right (or perhaps wrong?) hands, playing an instrument can be used as a tool of seduction with great effectiveness.

“Beautiful sounds are about frequency ratios. All music is Math, really.”

Nathan has always struggled to understand people and connect with them. The language he speaks is the language of numbers and formulas, so these words are the perfect introduction to the beautiful world of music for him.

Now that you have had a chance to explore these scenes, do you have a personal favourite? Can you think of any piano duets that I missed? Share your thoughts with the Silver Petticoat team and fellow readers below!

Our romance-themed entertainment site is on a mission to help you find the best period dramas, romance movies, TV shows, and books. Other topics include Jane Austen, Classic Hollywood, TV Couples, Fairy Tales, Romantic Living, Romanticism, and more. We’re damsels not in distress fighting for the all-new optimistic Romantic Revolution. Join us and subscribe. For more information, see our About, Old-Fashioned Romance 101, Modern Romanticism 101, and Romantic Living 101.
Pin this article to read later! And make sure to follow us on Pinterest.
By Yaroslavna Simdyankina on May 2nd, 2017