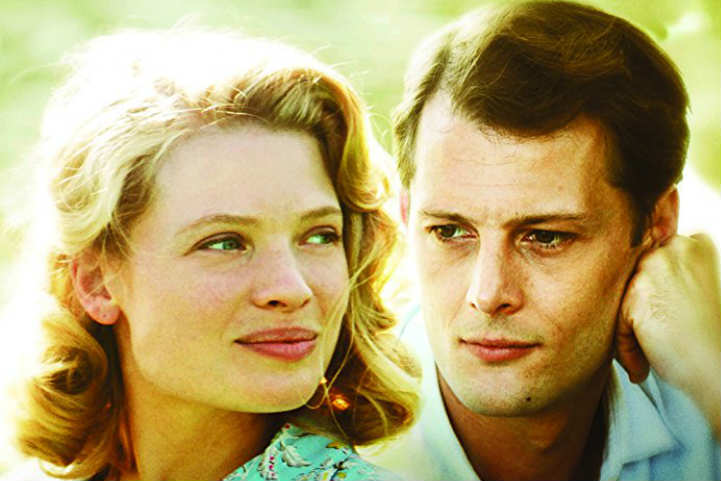 This past year in order to broaden my perspective, I decided to start watching foreign films. I’ve never been one to want to stay in my own cultural bubble. I prefer to explore, even if it is only through the medium of cinema. Sometimes I find similarities I can relate to. Other times I feel completely lost in the cultural translation. But I always come away from such armchair adventures challenged and contemplative.

FOR A WOMAN SUMMARY

For a Woman is a recent French film which explores the dynamics of marriage, family, and even politics. It begins as two sisters, Tania and Anne, go through their mother’s effects after her passing. This leads Anne into a further search into her parent’s history. The film then moves into the past and the main storyline surrounding their parents Michel and Léna.

Michel and Léna are Russian Jews. They have managed to survive WWII and escape from the horrors of the concentration camp. Michel falls in love with Léna at first sight. But their decision to marry is more one of gratitude and necessity for her. They migrate to the French city of Lyon where they apply for citizenship, start a family and open a men’s clothing shop.

RELATED POST: Come What May (2015) -A Flawed War Film Which Draws Attention to the Plight of Refugees

Their life is a contented one with Léna absorbed in raising their daughter and Michel joining a small group of Communists. Everything changes with the arrival of Jean, the man who claims to be Michel’s younger brother. Because Jean is Michel’s only remaining family, he is welcomed into their home. Though Jean and Michel reminisce about their childhood, Jean is less forthcoming with his role in the war and his current clandestine activities.

Uncovering family secrets -For a Woman (2013)

As Jean’s stay with them drags on, tensions mount and rise to the surface. Michel begins to question his brother’s political beliefs and purpose in France. Léna wrestles with her growing attraction to her brother-in-law and her increasing discontent with her life. When Jean’s undercover life finally catches up with him, it puts the whole family in danger.

WHEN FAMILY, LOVE, AND POLITICS COLLIDE

For a Woman is a deceptive title for a film such as this. That along with the seemingly romantic trailer I watched led me to believe this would be more of a period romance than the political and relational study this film actually is.

I don’t believe I’ve ever seen a film with a likable main character who is a Communist. Since the early days of McCarthyism until our current times, American film generally portrays Communists and even Russians in a negative light. Although For a Woman portrays Michel as a loyal Communist, he is not an ardent one, nor an activist. His involvement is a way of holding on to his family roots and also being a part of a familiar community. The film gives the impression that Michel agrees with them politically. This, however, is contrasted with his capitalistic tendencies in owning and managing his men’s clothing store. He is not opposed to making a profit but insists on his employees calling him by his first name.

The film contrasts Michel’s somewhat tepid politics with those of his brother Jean. Jean’s beliefs are less obvious. But he adheres to them much more strictly, even to the point of risking his life. There are also hints of the brothers’ Jewish background with the film mentioning Jewish immigration to (British) Palestine before it becomes the state of Israel.

The love story between Michel and Léna is quietly romantic.  Despite the fact that Léna married Michel to spare her life in a concentration camp, she also feels a strong loyalty and her own brand of love for him. For his part, Michel adores his wife. The way he loves her is one of the most tender romances I’ve seen. Jean’s arrival challenges their marriage with long-lasting consequences. But even with the bittersweet climax to their marriage, Michel remains true to that love.

WHEN THE UNEXPECTED IS A NICE SURPRISE

Although For a Woman is not the film I was expecting, it was not unappreciated. With it’s quiet, unhurried pace, it slowly reveals the love and dysfunction that unites a family and tears it apart. The fact that it is set in the aftermath of WWII only enhances the melancholy discovery the two sisters make about the lives of their parents.

I do appreciate how For a Woman explores the family dynamic, focusing particularly on how a child’s view of their parents is often different than the reality.

The actors are all unfamiliar to me, but I feel that they are all superbly cast in their roles. Benoît Magimel is extremely sympathetic as the man who loves both his wife and his brother and must forgive them both. He actually reminded me a bit of a young Robert De Niro. The blonde haired, plump mouthed Mélanie Thierry is achingly delicate as the young wife who begins to question what she wants from life once survival is no longer a priority. And former model Nicholas Duvauchelle is not only delicious to look at but mesmerizing to watch as the younger brother with a haunted past and secretive present.

RELATED POST: A Tale of Love and Darkness (2015) -An Aptly Named Bleak and Hopeless True Story

Overall, For A Woman gave me a lot more to appreciate than I expected. It has surprising depth and is more emotionally touching than I anticipated.

Content: Other than a brief sex scene where a woman’s breasts are exposed, there is very little objectionable material.

Where to Watch: For a Woman is available to rent or buy on numerous online platforms such as Amazon, Apple and Google Play. It is also streaming for free on Amazon and is available on DVD.