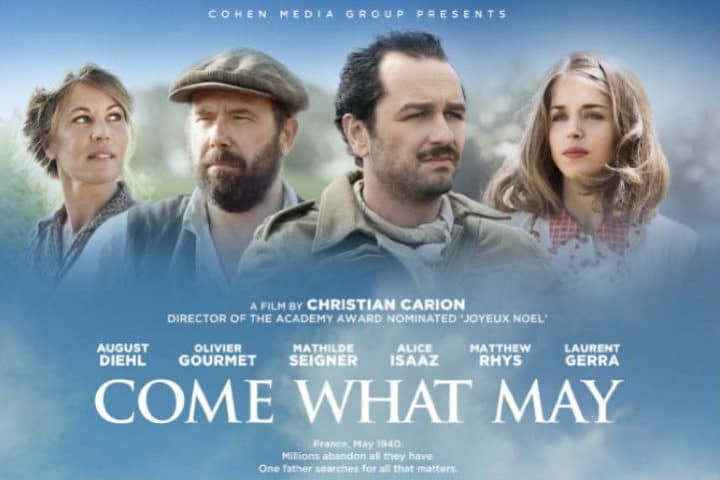 Come What May Synopsis

Come What May takes place during the early years of World War II. In 1939 a German father and son escape to a little village in Northern France. The father warns his young boy to speak only in French and never in their native tongue as they hide openly in the small village of Pas-de-Calais. Unfortunately, Hans is soon arrested and his son Max is left in the care of the town’s school teacher Suzanne.

Months pass and Paul, the village mayor, receives distressing news about the German army’s advance into France. Gathering up the people of Pas-de-Calais, he convinces them to follow the French government’s earlier recommendation of voluntary evacuation to southern France. Young Max is devastated to leave the last place his father and he were together. Remembering his father’s promise to come back for him, Max leaves a message for his father on the schoolhouse chalkboard, telling him where he plans to go.

Meanwhile, the Germans attack the nearby city where Hans has been imprisoned. The jailers release all of the incarcerated and evacuate the city. During his escape, Hans meets Percy, a Scottish army captain who has recently seen his entire company slaughtered. The two men decide to travel together while they seek out Hans’ son.

Come What May is a unique film. There have been many movies made about war and WWII, but few if any tackle the subjects of voluntary evacuation. According to the opening credits, the displacement of eight million people in the early days of the war is one of the largest in history. It occurs in the days before the battle of Dunkirk when the British abandoned France to Germany.

At the heart of this film is the unbreakable bond between father and son. Though separated, Hans and Max never give up hope of reuniting in a world where it seems impossible. It is rare to see this type of relationship onscreen and therefore I appreciate it all the more. 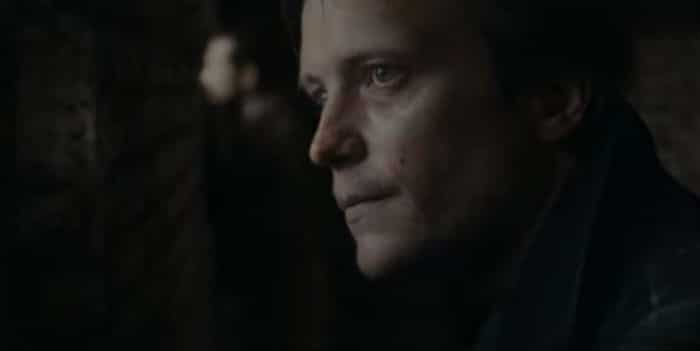 A father despairs of finding his son.

The other focus of Come What May is the exodus and journey of a small community hoping to survive in a time of great threat and uncertainty. Each family must make the decision to stay or go, what to take and what to leave behind, knowing there may be nothing to return to.  In essence, the villagers are a family albeit a much larger one.

Though this film addresses a neglected topic, it, unfortunately, falls short in many ways. The opening scenes are disjointed and choppy. It quickly breezes through the back story of Hans and Max. It provides little explanation of why they fled Germany or how they ended up in Pas-de-Calais. Even Hans’ arrest is a mystery explained only briefly later in the film. As a viewer, I felt as if I had been plopped into the middle of an ongoing story and had a hard time understanding what was happening.

In war, even a school teacher can become an ordinary hero.

Another failing of the film is that it is scenery driven. The cinematography of the French countryside is gorgeous and the historical details are accurate enough to transport the viewer into mid-century France. But this is not enough to engage the viewer in a film which is inspired by real-life accounts. The lack of dialogue and a clear plot are a hindrance to creating an emotional connection with the viewer. For most of the film, there is also a noticeable lack of fear and tension which is sorely needed when portraying war time events.

That being said, I am still glad I watched Come What May. As I mentioned, the cinematography makes this film a pleasure to watch in spite of its’ somber topic. The score is gorgeous, haunting and fitting as composed by the great Ennio Morricone. (Side note: I squealed with joy over the composer when I remembered his name being mentioned by Jack Black’s character in The Holiday!)

German tanks heighten the fear for the French evacuees.

There were a few moments of whimsy I appreciated. A brief teasing scene between Hans and the Scottish Percy over which side of the road to drive on adds levity. Also, a duck acts as a small supporting character on the journey south. The duck’s reactions to events that happen almost seem human. The film is also lightened with hope whenever Hans finds Max’ messages in various school houses during his search.

Come What May also highlights little moments not often seen in war films. There is the side story of a German propaganda film crew. The humanization of certain German soldiers who face death proves that in the moments between life and death the line between us and them dissolves. Instead, we are no longer enemies. We are simply human beings with a mixture of both good and evil in us all.

With our modern news headlines always full of stories about war and the humanitarian crisis of millions of refugees, Come What May is a film which helps us to consider their plight. The cost of war is not just in physical lives. The collateral damage is also enormous. Communities and families are divided and devastated. A peoples’ sense of place is severed. Their oral and cultural histories and memories are lost, sometimes forever. Education and livelihoods are disrupted and the trauma is almost always passed on to the next generation. Survival is a hollow victory.

Come What May does not dig deep enough into these sacrifices and losses. But it does touch on them enough to make the viewer aware of them. If the film doesn’t do enough to draw attention to this tragedy than the real-life photos at the beginning and end of it will. What this movie may lack in emotional connection is more than made up for when looking at pictures of actual people caught in personal moments of survival.

Come What May is a highly imperfect film. However, it is one which draws attention to an overlooked consequence of war without becoming too graphic. Despite its’ flaws, the film is one I recommend.

Content Note: Though rated R for some war violence, it is one of the less graphic war films I’ve seen.

Where to Watch: Stream on Netflix, rent on Amazon or purchase on DVD.